When I think of some of my favorite point n’ click adventures growing up and into my teen years , the list isn’t really that long. Yet one particular game is pretty high on the list and it’s hard to believe it came out eighteen years ago. That game was Beneath A Steel Sky. Taking place in the future, it featured a gruff, wise talking young man raised in a native tribe of Australia and an even more wisetalking, spirited robot named Joey. It became a game much larger than it seemed at first and cemented in my mind forever as a classic.

Now comes Primordia, distributed by the so far no duds Wadjeteye Games and developed by Wormwood Games. This is another AGS masterpiece and the third futuristic, not comedy, not developed by Wadjeteye game from the publisher. Yet, unlike the two previous games of futuristic madness, this is the most futuristic and also the most comedic. It’s definitely has to be a predecessor of Beneath A Steel Sky.

This is not an official review, but just a preview. In what I’ve seen of the game, the puzzles are both maddening and genius. To think you have to pass a difficult puzzle only for the solution to be a simple inventory concept is actually hilarious, because it’ll take you a bit till you realize this. The graphics are pixel awesomeness like in the past and Dave has used his regular team again with the voice acting, but in a way that is very different and in characters that turn things upside down.

Primordia is scheduled to be released later this month and I will review it fully then, but for now, here’s some screen shots and also go over to the Wadjeteye page and the Wormwood page for more. 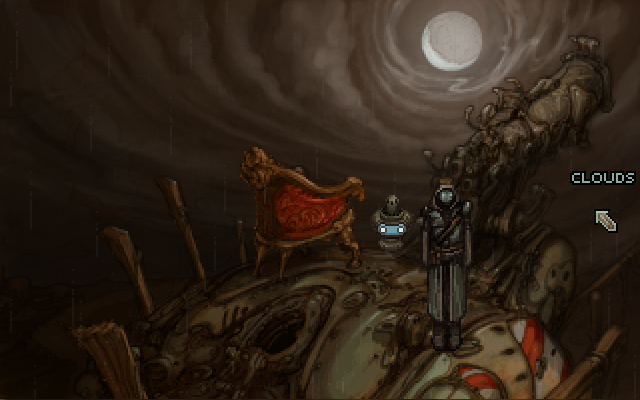 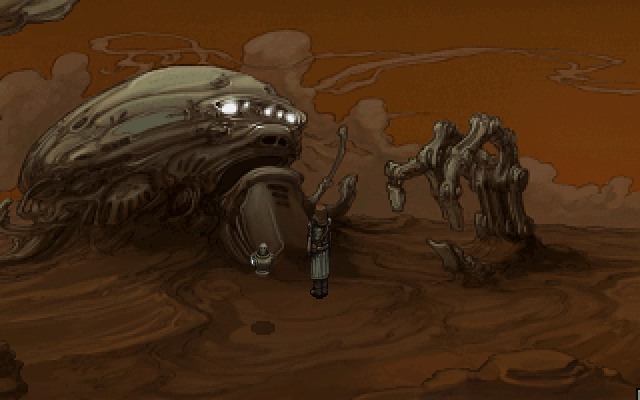