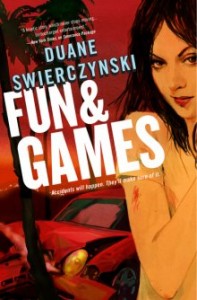 Car chases, attempted murder, mansions on the hill, underground prisons, psychopaths, agents, directors, actors, cops, criminals, lawyers, big whigs, buxom babes, nudity, sex, drugs, death, destruction… sounds like a regular day in Hollywood doesn’t it? At least the Hollywood of the movies, but for Charlie Hardie it’s the most atypical day in usually decidedly chosen humdrum life.
Excitement was the norm for him, till one day and for the last few years he’s done everything in his power to have the most basic, boring life possible. Life doesn’t ever go the way one plans, especially when the man running your life is writer Duane Swiercynski.

This isn’t how the Charlie Hardie trilogy of FUN & GAMES (June 2011), HELL & GONE(October 2011) and POINT & SHOOT (scheduled for 2013) begins, but that’s the crux of the matter. I became a real fan of Duane’s through his work on CABLE Vol.2 , in which Nate Summers and an unnamed child travel through a crazy future. I had been marginally introduced to him prior through his book The Blonde, but it was with Fun & Games that his brand of high octane, high adventure, crazy twists and wilder turns really grabbed me and have turned me into an always and future fan.

As with some of the best of crime noir fiction, the Charlie Hardie series is very visual. As you go through each passage, there is no way to not envision how this book would be translated on to the big screen with any of the current aging action stars of the 80s who are still kicking ass and taking names at the helm. Personally I see Val Kilmer or Russell Crowe when I close my eyes and/or pour through the pages, but I’m not a movie executive or a financier or even someone with the money to buy the rights to take the energy on a script adaptation, no, here I’m just a fan who thinks you should be as well.

Swiercynski takes the choice of an almost fourth person approach here, jumping from the perspective of various characters, including the peripheral. This style is kept up through both books and while jarring at first, it allows a really inventive way of revealing bits and pieces of a much larger whole. As much as this is Charlie’s adventure, there is so much more going on and each clue, hint, tid bit and revelation into this huge architecture Duane has built just expands in such ways that you can pretty much completely understand why he’s taking his time with the third book. Originally this trilogy was going to come hard and fast, June and October of 2011 and then March of 2012. After finishing Hell & Gone and then reading the first openings of Point & Shoot at the end of it, I was salivating at the bit for the final chapter, wondering how after how large, crazy and thrilling the second book was, it could be topped. That’s the idea with a trilogy right? To keep building and building. Not that there’s many trilogy to compare to. In its own way Charlie Hardie’s story and Duane’s concept to do it as three self-contained but completely interconnected books is truly quite original. The only real trilogies I can even think of in literature that may have begun as being conceptually the same is the work of Robertson Davis, all other trilogies have such different histories and origins. 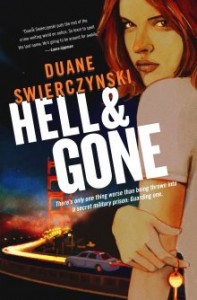 One of the most fascinating things from this fourth person style of different perspectives is you gain an appreciation and interest for everyone involved, even the people who die or the people who just seem like they’re pure evil. It is one of the most amazing aspects of the writing that would definitely get lost in transition from page to screen.

I must say I enjoyed HELL & GONE much more than FUN & GAMES. There’s just so much intrigue, character development and the type of nail biting I personally love. FUN & GAMES for most the most part is escaping the horror, not stopping for one moment to explore, while HELL & GONE is the locked chamber, with no where to run, so you better figure out how to just survive till you can escape. I can only guess that the final book is the insanity where you try to decide to go into the lion’s den.

FUN & GAMES and HELL & GONE were published by Mulholland Books and are availabile at all fine book retailers and in all e-book formats.