A look at Da New Guys-Day of the Jackass: A Super Fun Indie Action Title 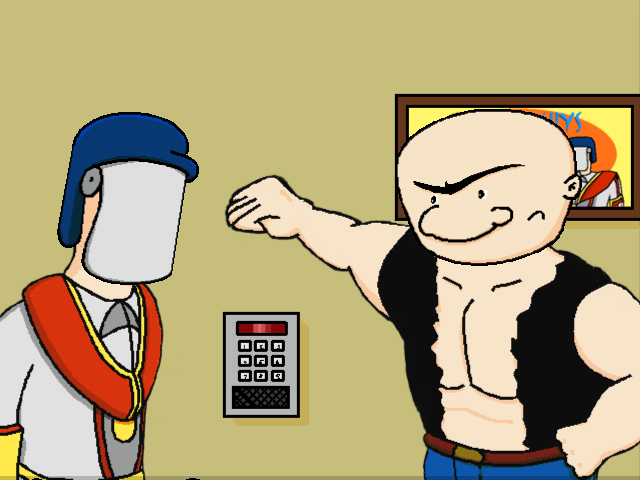 In the world of pop-culture there are many things I enjoy, but two certain interests developed around the same time. My love point n’ click adventure games and my almost addictive enjoyment of sports entertainment/professional wrestling. Both these interests have evolved over the years even if the actual subjects haven’t. The best of point n click games are still interesting, but not heavy intensive art work with quirky dialogue, cool characters, a wacky plot and interesting puzzles. Wrestling has generally been the same since my childhood, quick paced action with some slow down, colorful larger than life characters, story lines that are a mix of reality and the completely unrealistic.

In the recently released game “Da New Guys: Day of the Jackass”, programmer, artist and designer Chris Burton has found a way to merge the two. Although one would say it’s much more Hulk Hogan’s Rock n Wrestling cartoon as classic adventure game, it still makes for a funny, ridiculous and crazy game.

That isn’t to say it’s without flaws. The art isn’t completely polished (but definitely has charm and is a big advance from the 8bit graphics of the first non-commercial gae), some of the later puzzles fall into the trap of being mini-games, but all together it is worth your time along with the original game which is available for free.

I had the pleasure/privilige to shoot Chris Burton a few questions via e-mail before the game officially came out and I’ve been sitting on his excellent answers for awhile. I can only hope that if my short review didn’t make you have interest, the following with links and various screenshots will.

1.) What was the deal with the bear head in the arena in Da New Guys? 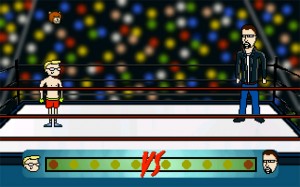 That goofy-looking bear is based on my baby brother’s old teddy, who we used to make all kinds of dumb stories about when we were kids. It’s kind of an in-joke that nobody but us would get, which is why it’s not very prominent, but good old Bear’s present and correct in Day of the Jackass too!

2.) What was the original inspiration for Da New Guys? Was it always wrestling based or did the characters come first?

The characters always come first. Wrestling obviously plays a big part, but I think the heart of any Da New Guys story always has to be about the characters – I don’t think it would work if the story was ever just “they have to win the match so they can become champions”.

That said, the trio came about through playing a “true” wrestling game – Smackdown 2 on the good old PSOne. It had a really great create-a-wrestler mode, and then play with them through auto-generated storylines. I made the three heroes, then the game would make up rivalries for them to get involved in. Brain had a stick-on goofy smile, Simon was always grumpy, and so the characters just grew from there.

3.) Defender looks a lot like Cobra Commander, what’s the story there?

Google tells me that’s from G.I. Joe, so it isn’t intentional – though the comic-book influence definitely is. He’s a bit of a comic-book geek, and has a bit of a “hero complex”, so his costume tries to reflect that. His first appearance had more of a “samurai warrior” vibe, but it got refined and smoothed out over time to make it more original. Also, for as-yet unexplained reasons he wears a helmet to stay anonymous! 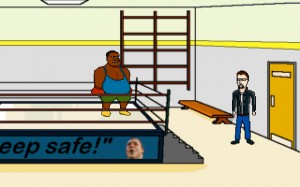 4.)I believe I noticed Kurt Angle in the first game in the Gym, is that correct?

It is! All thanks to a lack of texturing ability and easy-access to online images. I loved that Kurt was so over-the-top and in love with himself, but unlike Brain he’s actually a decent wrestler.

I’ve been out of tune with wrestling lately – most of my memories are from the late 90s. Macho Man’s up there at the top – who can’t laugh every time he shouts? I loved any moment William Regal would try to “educate” the fans by showing them proper table manners – wrestling’s known for its stereotyping but I think that’s all part of the fun. The family issues between Vince and Shane McMahon were also great – I think that was the main dramatic angle I was genuinely swept up in. Also: Doink the Clown!

I like humour that’s got the right mix of being wacky but also based in reality. In the same way that the game’s art style has caricatured people in a perspective-correct world, I try to push things over-the-top but still have clear “rules” that ground it all (the characters can get hurt, for example). I used to watch a lot of British sitcoms like Only Fools and Horses, which was very character-based and had a simple but charming humour to it. Unfortunately though, my cynicism’s growing and these days I’m more into comedians like Doug Stanhope.

Wallace & Gromit‘s more of a direct influence, I’d say, because of how well they manage to blend action and comedy together. The chase scene in A Close Shave is a perfect example of that: it’s wholly entertaining, and it’s got a very good mix of genuine jokes with geniune thrills.

7.)What are your full aspirations for Da New Guys? You’ve developed an animation and now finally have the second game, is there a next step or did the process of over 9 years betwen games drain that dream?

My ambitions grow with each project, and each one takes more and more effort, so I think any potential “next step” for Da New Guys would really be huge. I’ll never say no to anything else DNG-related, but I think another game would be so ambitious I’d have to really think hard about how to go about it properly. If people respond well to their first sequel, I’d certainly be very enthused to do another one!

8.)In terms of construction, how much of the game is all you(not counting the music) and what did Wadjeteye bring to the table?

Wadjet Eye got involved very late in development, so up until the middle of last year it was all me. That said, I think having Wadjet Eye on board massively improved the game. The story and pacing was final, but in an adventure game it’s the small moments and details that matter, and I got a ton of feedback. Not just from the excellent testers, but Dave and Emily were both very open about what they liked and didn’t like, which really helped me bash the game into shape. There were a couple of moments in the game where, looking back, the puzzles really weren’t so intuitive, and they were great to bounce new ides off of.

Wadjet Eye also gave me a whole bunch of voice actors! The first Da New Guys game was all voiced by myself, and it’s pretty obvious. While there are a lot of new characters in the sequel, there are some returning as well, but Dave was able to get some great replacements who I really wish I was able to get at the time I made the first one.

9.)I noticed in the art gallery that the characters started out as 3D models which you then drew over for Day of The Jackass, what was the thinking process for this decision?

The main reason the game took so long to make was because for a long time it really lacked the polish I wanted it to have, and the low-budget was painfully obvious when it came to animation. I can’t animate 2D at all, so when – after having learnt 3D animation – I discovered a way to animate in 3D space and rotoscope the frames into the game, the answer was obvious. It was a very elaborate and time-consuming job to convert the 3D to 2D, but I think it paid off really well, and let me come up with new puzzles that took advantage of it. Whereas before it was difficult enough to make a character hold their hand out, now I could make them kick, climb ladders, and do whatever I wanted. That freedom really meant I didn’t have to cut a puzzle or be less ambitious in a cutscene, just because I wouldn’t be able to portray it.

I’m really glad you’re enjoying it so far, and thanks for the interest!

I finally finished the game various times since that interview and slowly but surely getting this article up for print since the game became officially available at the end of February/almost beginning of March.  It is currently on sale from Wadgeteye Games and for $10 is worth it for anyone who enjoys funny point n click adventures with full stories and enjoyable characters.  There are arguments that can be made that NO ONE would want to help The Brain and that’s true, but I can think of many popular comedies full of annoying, stupid characters that we enjoy following… Mr. Bean, Peter Griffin, etc. and luckily for most of the game one plays the more enjoyable courageous, interesting guy that you wonder why he even hangs with these guys and the tough, grumpy, gruff guy that makes you wonder why he hangs with these guys.  It’s that awesome triumverite we’ve seen before and done well in an animated indie cartoon adventure. 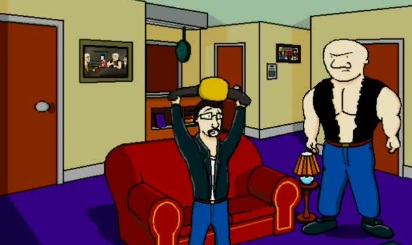 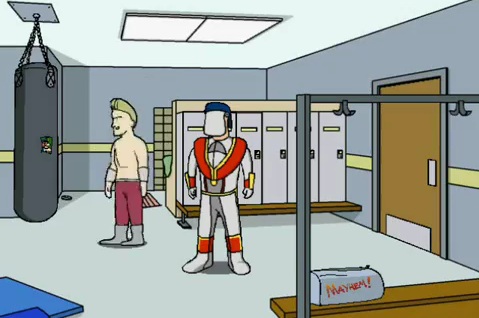 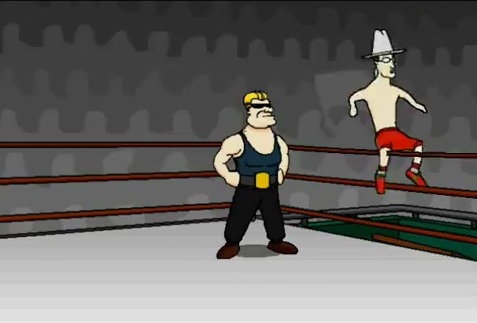