Some Kickstarter Projects You Can Join In that Caught My Eye

I started working on this last night and just wanted to finish it off because right now I’m just not feeling it. It’s a good distraction from the whole world, but it is still about money and stuff… and more about money than stuff… still, we need distractions.

GAME OVER: Insert More Quarters is an anthology of a bunch of very talented young comics makers, they had some amazingly cool rewards at the %50-$75 but those are gone, BUT if some super rich folks can do the $100 or a bunch of folks go for the $25 pledge it’ll bring us to FINAL BOSS level meaning even more rewards for the same pledges. On the page they have links to most of the contributors and I checked all their pages, these are a talented group of folks who if they weren’t doing this project would probably get discovered by Kazu Kibishi for FLIGHT or something like that.

Curse of the Merch Girl is a diverse multimedia project from hip-hop artist MURS and comics creator Josh Blaylock. It’ll be a music video, a comic book and a 10 track cd. The 10 songs are designed to be listened to while reading the graphic novel. This is one of the projects I really am excited for. It hasn’t reached full funding yet and it really is one of those that shouldn’t be stuck. If I had $2500, I’d totally do that pledge.

Kiko The Brave Little Bat, so if you have $150 to spare I want one of the complete kits of book, DVD and plush, wants one too and then the third is for you. I really can’t bring myself to spend $50 for a plush doll and a children’s book even though I want it. $25 for a very mature graphic novel and CD as in the above, yes… but $50 for a kid’s thing? No…not really, but if I had a child? Hell yeah!

Man of God-The Death of John Morris: This comic featuring art by Yvel Guichet is actually available in the current March Previews and seems interesting enough to pre-order. If you’re into variant covers and the such I suggest hopping on the kickstarter though.

Zach Meets The Zombie is a great looking children’s book. You might be aware that I am not much of a zombie fan. I like about 2-3 things in the zombie genre, and if this book is as good as the pitch is, this would become the 4th.

Feeble’s Fable: This is no DOUBLE FINE ADVENTURE, but for a small independent adventure production and design it is definitely a worthwhile project. I’m still confused why their pitch videos outside of game footage look they were shot on cheapo cameras in 1991 though. Despite that, Feeble is adorable. 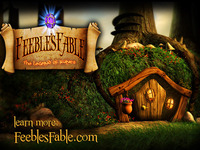 Riddikulus 2012 – A Rolling Wizard Rock Festival: I know for a fact a bunch of you are Potterphiles. I’m more an admirer and I never got into Wizard Rock heavily. and ‘s promotion and marketing for some of them is closest I’ve gotten, but as I listened to these bands and look at the rewards I support this project and considering what venue they hit in NYC I’ll go.

Gnombre the hispanic Garden gnome: I was really on board for the bobblehead 7inch version here for $20, but they want an extra $10 for shipping now. That’s unfortunate. I still think this thing looks awesome and if you have a home with a lawn, the 13 inch is worth even $50.

Suspect Device 2 is a comic featuring some amazing folks using an awesome idea. Panel 1 is from Jim Davis’ Garfield, the final Panel is from Ernie Bushmiller’s Nancy, and in between some of the wildest, craziest and funniest cartoonists in the world create a story that connects the two panels. Josh got a great selection of folks on board for this one. This is gonna be an awesome book.