To travel around the world without leaving home there are only three ways. The first is to jump around the internet which really doesn’t count, the next is to visit Epcot Center in Orlando, Florida which has a pavilion of buildings representing many countries except unless you live in Orlando that would count as leave home, so the real way is through the power of film and exotic restaurants. The added addition of films is you get to time travel as well.

On the last week/first week of February/March 2012 I got to visit New Zealand, India, The United Kingdom and Monaco and each adventure was quite amazing.

It started out with getting to see Taika Waititi’s latest feature BOY at a special screening at Knitting Factory Brooklyn. Taika is an Oscar nominated film maker who is best known for his very popular Eagle vs. Shark and his work with Flight of the Conchords. BOY takes place in the early 80s and tells a truly funny, smart and compelling film about a young man in rural New Zealand. He lives in a very small town full of lush landscapes and beauty in a very poor but sustainable lifestyle. The bulk of the film is about his father’s return to town after a stay in prison and the changes that come to Boy’s life in that time. The film has some awesome fantasy sequences including animation, music video recreations and uproarious photo montages. The film has so much heart, but its also full of kinetic energy. The landscape scenes of New Zealand’s lush green are an amazing stark contrast to the poverty of the houses and town, creating a vibe in the film of hope full with hopeless that so much of life contains. When so much changes, it also always feels the same, as people come in and out of your life, relationships change, emotions evolve, personalities develop further and BOY finds a way to express all that through a simple story with complex situations. After the film I had the pleasure to meet Taika himself and he was very down to Earth and open. That feels like it’s changed a bit in his very humorist updates on his Kickstarter, but I’m pretty sure it’s still humble despite the films instant smash success in America. I had asked him some simple questions about the film, in both its making and its message and he expressed himself with an honest and passionate discussion. If you have the chance to see BOY while its on its US tour, do so… but hopefully this will all lead to a North American DVD/Bluray available at a reasonable price and not imported from New Zealand for multi-zone players.

Before seeing BOY I had dinner at Bay Leaf, an excellent Indian place off of Bedford. It’s actually from what I can tell the only Indian cusine in that area of Williamsburg. Traditionally I have Thai when out there, but since I was alone for the evening I got to try out this place and it was excellent. Actually some of the best tasting Indian I’ve ever had. I ended up having Indian again on Thursday at one of the places on 1 and 6th and they paled in comparison at least flavor style, in my opinion. Both meals were amazing and filling, but Bay Leaf was a tantamount experience followed by an amazing movie I had really desired and meeting its star. 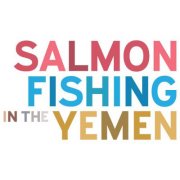 I had gone to Sunshine Cinema on Thursday evening to see a Village Voice screening of SALMON FISHING IN THE YEMEN starring Ewan McGregor and Emily Blunt with Amr Waked and Kristin Scott Thomas. It was directed by Lasse Hallström from a screenplay by Simon Beaufoy, two masters of adapting complicated novels into exceptional films. The novel in question here is by the same name and was written by Paul Torday, while never having not read the book, I ascertain from what I can find online that it was very comedic in nature, a great satire filled with a poignant story. The film strips a a bit of that comedy down to just the barest essentials I feel, but still delivers a poignant story with a completely non-allegorical political message alongside an a subtly allegorical life message. Amr Waked is the best thing in this entire film outside of the travelouge. His performance is so strong it is unfortunate when this film has debuted in America, as if it wasn’t directly after The Oscars he would be a shoo-in for a Best Supporting Actor nomination if not a win and as there’s no Acting Nods for foreign films, well… He is just that good though. As said, next comes the visuals. The film travels throughout the UK and Monaco and truly shows them off with a flair. A much higher flair than New Zealand is shown in BOY, but here LOCATION was a character where in BOY it was just a setting. Every space becomes as important to the events and the story as the people themselves. Traditionally one would credit the Director of Photography for this, but Terry Stacey’s previous work was never at a scale like this, so I’ve gotta think that Beaufoy’s script and Lasse’s directing propels this magnificence. Look at Simon’s 127 Hours or Slumdog Millionaire or Hallström’s many films to see their hands in the work no matter who the cinematographer is. SALMON is parable in many ways, just as the concept of salmon fishing in the yemen is a metaphor for life itself.

Through these two films and two wonderful meals I got to see and feel life, love and imagination and for just a moment feel like I’d left New York City and traveled the world.

(It must be stated that unfortunately BOY is currently only scheduled for the following cities: New York, Throughout California (LA, SF, etc.), Boston,  Seattle, Washington DC, Atlanta, GA and Santa Fe in Texas with various different opening dates at specific theaters which you can see here.

As stated above on BOY, hopefully both films will recieve North American DVD/Blu-Ray releases, they are both worthy.)