The Group of Sadly Forgotten Weirdos who did evil things 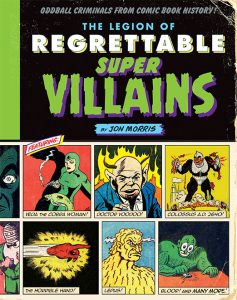 Comics have a history of weird, wacky, unusual or even actually lame, annoying and “maybe we’d be better off without but were stuck with them so we better learn to live with it” characters. Some of them only existing for one issue, others despite their complete nuttiness and/or annoying and/or pointlessness lasting for decades. These characters run the gamut from good guys to bad guys to sidekicks to henchmen and even just supporting characters (such as Steve Lombard of DC Comics’ Daily Planet in Superman comics). Some of these characters were just also not as awesome as others, so because of one thing or another they’ve been less highlighted and become lesser known then their counterparts.

In the second volume of a series from Quirk Books by Jon Morris, titled The Legion of Regrettable Super Villains, the author highlights many of these characters on the “evil” side of the board from the Golden Age to today’s comics including Image and Dark Horse. As the introduction suggests, much like in the first volume, these characters are less regrettable then they are possibly forgettable or more unpopular. Per that a slightly more well known Marvel villain Batroc the Leaper is featured in the The Silver Age section of the book. He of maybe anyone in the book seems almost out of place as he’s been featured in a variety of cartoons, had a toy and was even portrayed by one of the few household names in MMA, Georges St. Pierre in Captain America: The Winter Soldier.

Despite this, the profiles in The Legion of Regrettable Super Villains, are entertaining, at times informative and a wonderful collection focusing on characters what else-wise get the short shaft.

The true highlight of the book is the Golden Age section as if delves deep beyond Marvel and DC to many of the strange and varied companies of the time that published what are now obscure buried treasures in the regrettable factor is that it is regrettable they are not more easily accessible for readers of all pockets and locales. The Golden age has had a fair share of new collections, notably The Green Llama by Dark Horse and the work of Fletcher Hanks (whose character Lepus is featured on the cover of Legion) from Fantagraphics and most recently Craig Yoe’s Super Weird Heroes, a great companion to The Legion of Regrettable Super Villians , in which the originals are remastered, but a lot of the titles featured in Jon Morris’ books have not had that privilege. Therefore the pages and profiles he provides to a far gone past of crazy creation is most welcome as many of these comics would costs 1000s to own because of rarity of existence in this day and ageTo promote the book, Jon has also drawn illios of the first of  the book’s profiles (these excellent illustrations unfortunately are not in the book itself).  One of the editors at Quirk, Rick Chilot has done some as well for marketing. Here are three that I liked (but I like all of them).  Go to @calamityjon and @rickchillot on Twitter for more. 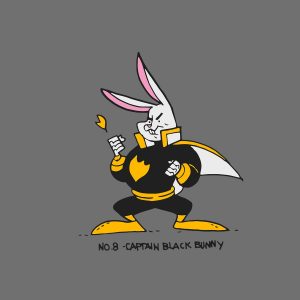 from the anthropomorphic version of Fawcett’s Captain Marvel AKA Shazam titled Hoppy, The Marvel Bunny. Created by Chad Grothkopf, a quality artist of the 30-40’s who also worked on DC Comics 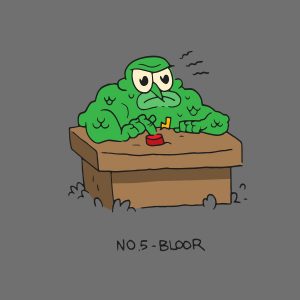 a true golden age classic the book provides pages from the unsung Prize Comics this character was in. the book credits Paul Norris and Dick Sprang, major players in DC’s Golden Age as the creators. 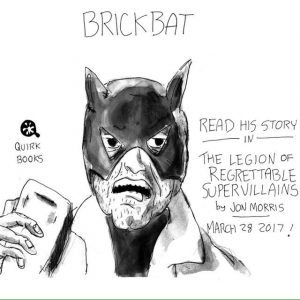 Not to be confused with Batman, he appeared in Police Comics-the home of Jack Cole’s Plastic Man. A creation of what could be also a regrettable creator George Brenner.

The Legion of Regrettable Supervillains by Jon Morris will be available wherever you like to buy books on March 28, 2017 from Quirk Books.  You will regret it if you don’t pick it up for yourself to devour, learn, discover, rediscover, laugh and maybe even cry over these amazing characters of yesteryear and today who coulda been contenders but barely even made it to the ring.