Ryan Estrada MORE then delivered on this project, especially in my personal case. Yet before we get to that I think I’ll just discuss the fan service he basically gave everyone who joined in on his Kickstarter.

Fully funded after one day he took a leap of faith with his backers and gave them his comic PLAGUED way before the campaign ended. Then as the campaign just kept getting larger he gave backers the second book, THE DOG’S SINS by KC Green/. The final two books at the main set up for this Winter collection were Ryan Andrews’ This Was Our Pact and a English translation of South Koran comic Definition of a Dead Body. Currently only the final hi res editions of both Ryan’s book are available at a name your price point.

They can found at the following links:
PLAGUED by Ryan Estrada
This Was Our Pact by Ryan Andrews

Unfortunately for the world but as a good faith to Kickstarter and exclusives, the rest including the Beat the Average books including e-book editions of more work by the Winter collection folks as well as newly translated to English of Nam Dong Yoon are as of now unavailable. Most of KC’s stuff as well as Ryan Andrew’s can be bought in print form though.

Now I shall attest that I chose to come in at the $100 tier which provided me with a bunch of print material, art supplies, original art and more. What’s more amazing is that Ryan had thought with my package he had bundled up some Korean Comic Con stuff as well and he hadn’t… so he made a second package, bundled that up with some more original art . All together it comes out to an amazing set. I even have a instruction comic on how to read Korean so those mini comics will eventually be extra special. 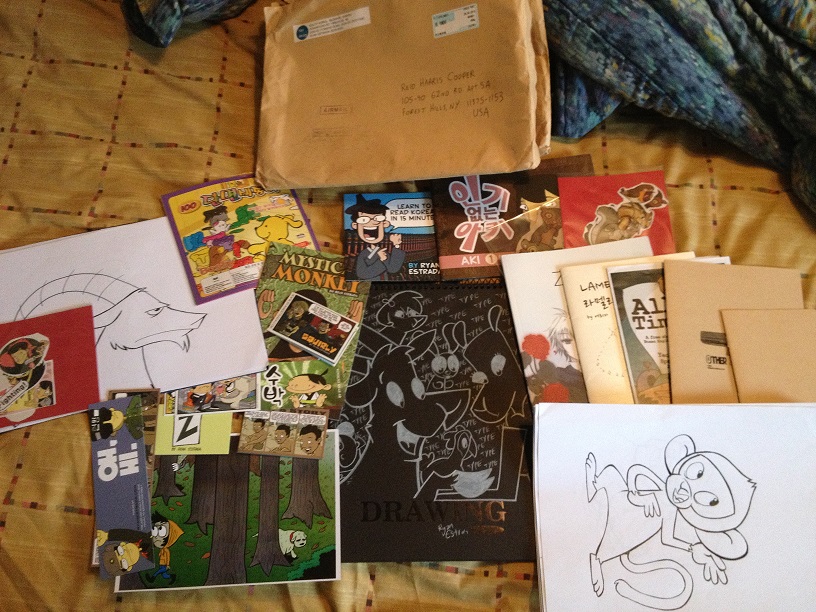 This entry was posted in Kickstarter and tagged kc green, ryan andrews, ryan estrada, the whole story. Bookmark the permalink.