One of the most exciting and coolest companies I discovered in my pre-NYCC research and then further at the show was Redbubble. Since the show I’ve been tracking the site when I can finding designs that truly struck my fancy and I thought would make cool T-shirts or stickers to own or in the very least wallpapers for my computer.

Redbubble is an absolutely awesome art community site,much like Flickr, Deviantart, and even Threadless, but has its own special vibe & design style that truly makes it stand out. Founded in 2006 by three artists & writers to help create a new marketplace for creative visual artists of all realms, the company has grown to feature over 200 thousand plus artists and help assist in over one million orders in nine million products ranging from shirts, stickers, iPhone cases, prints, calendars and full expanding branding for artists to stamp their visions on and see profit for their creations.

Working with various different companies to get the items printed everything is of high quality which I experienced first hand through a totebag, various stickers and a logoed shirt which have all come in very handy and have stood up to regular use.

The easiest and most exciting thing on Redbubble is its very intelligent alogorithm search engines and suggestions of new best work to find art you really love. I’ll be sharing some of that at the end, basically in my own preference, but I want to publicly thank Peter Tomassi and the entire staff at Redbubble. At NYCC they proved they don’t just run an excellent site, but can run an awesome convention booth experience. This was the first year they had brought product to the show for sale and their success blew me away. They really tried to cater to the current pop-culture fan with shirts ranging from TV, to movies, to comics, video games and basic nerd language. The booth itself was really set up greatly and the workers were totally sweet. My favorite type of images to find on Redbubble have been the ones that mashup a popular concept with something you wouldn’t expect or that just looks at the character, person, pop culture phenom in a new way that really catches the eye.  It could be a movie, cartoon, professional wrestling, TV show, actor, it doesn’t really matter, I just really like images that switch things up.  There are few artists I’ve found on the site who I really like such as Lapuss and Leigh Wortley.  Here’s three images I really liked on Redbubble, the first is New Mutant’s Warlock and Cyber in Calvin & Hobbes style by Leigh, the second is Fozzie Bear as Clockwork Orange’s Alex by Chris Wahl and the last is Showtime’s Dexter if it was a 1940’s WB Cartoon by Lapuss. 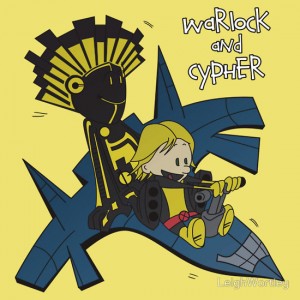 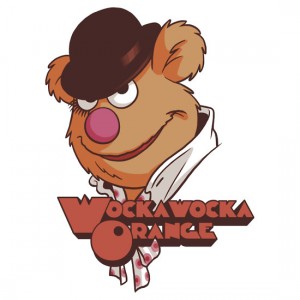 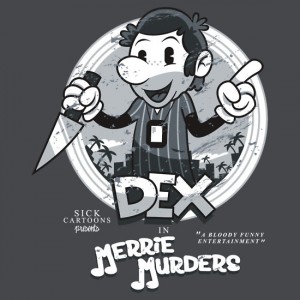 All three of these are available as shirts or stickers.  I haven’t personally decided what to get or to get all three or to get everything on the site.  It’s that awesome.