Book Expo America 2012 is right around the corner. Last year I wrote a focused pre-event article giving tips and advice on how to approach the show using my last two years prior of experience of tackling the Javits. That advice came in handy for myself as well, since my Book Expo America 2011 experience was absolutely amazing. I got so many awesome books, met awesome people, made connections, got amazing photos and plenty material for various articles.

This year I plan the same and I feel it might be good to reiterate some of my tips, rewrite them or maybe even give some new ones before delving into my very long list of highlights for the show.

One of the things people always focus on are sensible walking shoes, something with support, but I’m going to change my assessment on that fact after last year wearing obscenely sensible shoes. They were perfect when I was walking the floor. The minute I had to be standing on a line though, they became less sensible. They’re arched and designed to actually wobble with the groove of your foot, but once you’re just physically standing still with a bag or two of books waiting for the one author whose line is so long you’re not sure where the actual end of the line is you’re wishing you’re in sandals or barefooted or something like that. So what is my suggestion now? I have no idea. Take your feet into account, know what works for you in a situation like that. I’m thinking sandals, but you can’t get away with that easily and be professional. So just do what is going to be comfortable for you, whatever that is. Although barefooted is not a good idea.

The biggest tip I’ve going to do my best to implement is “running” back to bag check when things get too physically heavy and I end up being completely exhausted by shows end. I have events and signings and galley giveaways and just walking around aimlessly all over the show, not to mention Blog World and I might actually forget to get back to bag check, but even if I do, that rolling suitcase not allowed on the show floor will be there for when its time to go home.

So with some tips out of the way, the real fun can begin, my personal highlights and what I look forward to. I am not going to provide times, booth numbers or anything like that. That information is all on the internet, the mobile app and various blogs and news sites. This is just things that people going to Book Expo should be looking for or be excited to hear me talk about and for those not going to Book Expo a way to imagine it all before photos and proper reportage comes their way.

I’m going to start with regular authors instead of celebrities, etc. 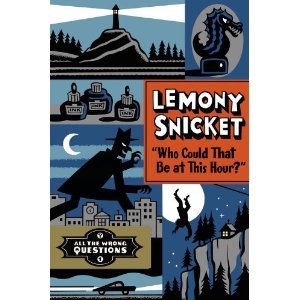 Daniel Handler is at Book Expo again, but he’s there as Lemony Snicket this time around. It’s been some years since he’s entered the Unfortunate Universe. Along with the great comics artist SETH, the first in his new series, All The Wrong Questions, will be previewed.

Andrew Gross who wrote the awesome EYES WIDE OPEN, will present his newest novel 15 SECONDS.R.L. Stine will be there for his newest adult focused novel, RED RAIN.

Michael Connelly who became even more popular than before after theMatthew McConaughey starring film The Lincoln Lawyer will be there for the latest Harry Bosch novel (for those only familiar with the movie, Bosch is Haller’s half brother and an LAPD homicide detective).

William Joyce, author/illustrator and academy award winner will be there promoting the book adaptation of the amazing The Fantastic Flying Books of Mr. Morris Lessmore.

Tracy Hickman, co-writer of the epic DragonSword, Deathgate and other fantastic series, will be there with publisher Shadow Mountain for his Tales of the Dragon’s Bard series.

Journalist Alex Stone will be signing his book, Fooling Houdini, one of the lesser known books at the show that really caught my attention.

Walter Mosley, the best selling crime novelist will be there in promotion of his sci-fi novel, a flip book of two novellas.

Ridley Pearson has a new adult suspense series that starts with The Risk Agent.

Children’s book writer/illustrator and coincidentally one of my former college fellow students, David Ezra Stein will be promoting his upcoming Because Amelia Smiled.

One of the greatest children’s writers ever, James Howe, will be there for his upcoming picture book, illustrated by Chris Raschka, Otter and Odder.

That doesn’t cover even remotely everything that I’ll even be into but it should focus you enough. 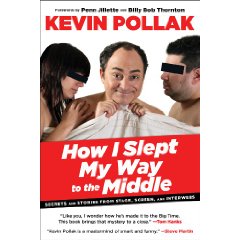 Molly Ringwald has written a novel.

Kevin Pollak has also written a memoir. Oh and if you haven’t checked out his newer podcast Talkin’ Walkin, you’re missing out.

Michael Ian Black has new book to promote in America, You Sexy Bitch co-written with Meghan McCain, who I believe shall also be there.

Frank DeCaro, best known for his movie reviews on The Daily Show and Sirius radio program, is promoting a collected recipe collection.

On top of that,  these three chefs of TOP CHEF fame shall be at the event!

In this listing I have left out a lot. My schedule is filled with galley times, panels, chefs, other major writers, comic artists, celebs and more. It is a full and crazy schedule which I doubt I’ll accomplish as there’s only 60 minutes in an hour and who knows who long some things can take between waiting, talking, getting a photo, a signature and getting to your next location which can be down the aisle or across the room, but it’s all worth it.

Hope you have as much fun as I plan to!