On Sunday I attended the Brooklyn Book Festival as I have done in years previous, but this year I didn’t get to attend it as rigorously as before. Last year I attended many panels, taking copious notes and providing tons of articles.

This year I only made it to one panel, titled “The Sex Panel” it was a discussion in comics in sex and featured an amazing array of talent moderated by comics journalist Heidi McDonald.

The panel started with slides showing the work of the artists. During the slides much was discussed and explained, but truthfully there were just amazing soundbites and quotes and I feel it best to share those.

Leela Corman
“It’s always fun to draw hairy men.”
“My editor thinks there’s too many breasts, I’m really in it for the lingerie”

Bob Fingerman
“No matter how hard I try, I always end up swimming back into the sewer.”
“If there are any furries here and I’m offending you… Good.” (on a story about confurrences, where a real bear crashes and has sex with everyone while they think he’s just someone in costume)

Beto Hernandez
“I messed up that bottom panel, I made his dick too small.” (on a Birdland page)
“That’s my furry story but I’ll never be able to top Bob” in which Bob replied “Don’t try.”

She also told a hard to quote story about being majorly influenced by Toulouse-Lautrec and achieving his career of working in a nightclub as an artist was an aspiration which she achieved working for burlesque club “The Box”.

Leela Corman: “Sex is a commodity”

Bob Fingerman: “I was hardwired.”

Talked about how there was a neighborhood bully who would beat him up if he draw him a naked chick. He traced an image of a cave woman from a toy box and just took off her top. He also said he had a cigar box since he was six years old that was full of dirty drawings he would do.

Gilbert Hernandez: When Mario and he were kids (8 years old) they saw Playboy and started drawing naked ladies. Beto wanted to get them accurate, but he got caught and in trouble and stopped. Yet when they started doing Love & Rockets it just progressed till the point of Birdland. Beto sas he did no research for sex drawing, just pulling it out of his imagination. By issue #3 (Birdland was serilizaed as regular comics before being collected) he was bored with it.

Molly mentions that she also did work with Playgirl, but she went drinking with the editors and they liked her, so her history may be biased.

Heidi then presented the question “When do you go to far?”

Leela was told no penis because of international publication.

“Male Penis is the deal breaker”

Bob talked about cesnoring himself when he worked on Shugga which came from working for Cracked and made him need to do a huge purge, but he felt even on that book he went way too insane.

He proceeded to talk about toning down Minimum for the a new collection. He says a lot of readers only saw the book as a lot of sex and missed the actual story.

“Violence & Sex is creepy, sex is a happy place, that’s why the tits are so big in my comics.” – Gilbert Hernandez

As this point in the panel there were many audience questions which intelligent and provided great insight but were both hard to quote or capture in context.

One of the final questions were to Molly Crabapple who had recently become a twitter trend through the efforts of major writers like Warren Ellis and Neil Gaiman after being arrested and detained for 11 hours as part of an Occupy Wallstreet march. She was asked about the connections between her world of burlesque and OWS.

Before the panel closed out so the creators could participate in a signing, Leela Corman had the quote of the evening talking about sex in books and popularity of it, in context to everything.

After the sex panel, I joined Dean Haspiel on the steps of Borough Hall to listen to Jimmy “J.J.” Walker and BernNadette Stanis (of GOOD TIMES fame), which provided a great clip I’ll be showing sooner than later.

To end things, here’s a shot of Dean, dream chronologist Jesse Reklaw and myself. 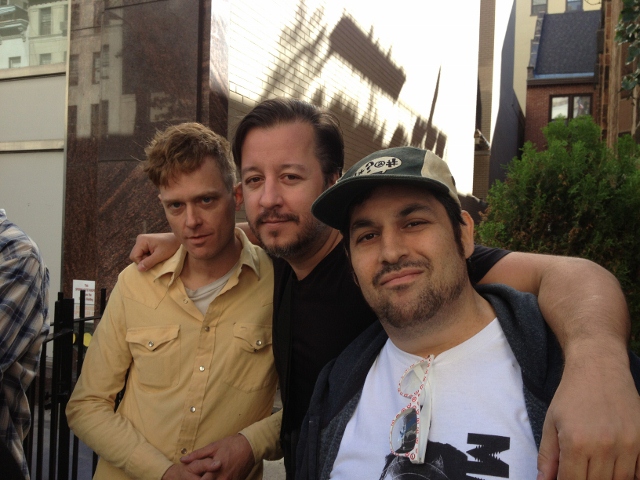 2 Responses to Brooklyn Book Festival 2012: The Sex Panel (and more)