It’s that time of the year again. In less than a month New York Comic Con hits Javits for the 7th year. I am not actually definitely going as of this time, that’s up in the air and won’t know till later in the month, but that can’t stop me from being excited nor can it stop me from anticipating and researching possible fun & excitement. Even if I don’t get to, people can look back on posts I make as a reference for possible things to check out and know about and knowing is half the battle. I don’t think the Joe’s ever revealed what to do after knowing though.

First and foremost is that opening night concert for VIPs and 4-Day Ticket Holders and well press & pros if we can fit in. Last year they set the bar high with the concert concept by having Tom Morello premiering his comic book series and performing as The Night Watchman. This year they raise the bar even higher as the finally completely really for reals reunited Ben Folds Five perform in the IGN on a special stop of their US tour for the soon to be released new album. The concert is at 8 PM on Thursday.

I have the word on a few panels popping up at the convention that may be of your interest.
My colleague in pop-culture media and information, Hannah Means-Shannon shall be moderating a talk with Seth Kushner, Christopher Irving and Eric Skillman on their book, LEAPING TALL BUILDINGS on Thursday at 4 PM.

Then at 6:30 also on that Thursday is a panel covering the Kickstarter funded documentary Comics in Focus: The Image Revolution that will feature the producers and filmmakers as well as unannounced guest. My guesses are Erik Larsen, Whilce Portacio or Robert Kirkman.

On Friday, October 12th there’s a panel titled “Maestros of Horror & Sci-Fi Music”, scheduled currently for 12:15 will feature the composers of video games such as Mass Effect, Dead Space, and Halo. It’s the extra addition of Living Legend, Nile Rodgers that really catches my attention here though. 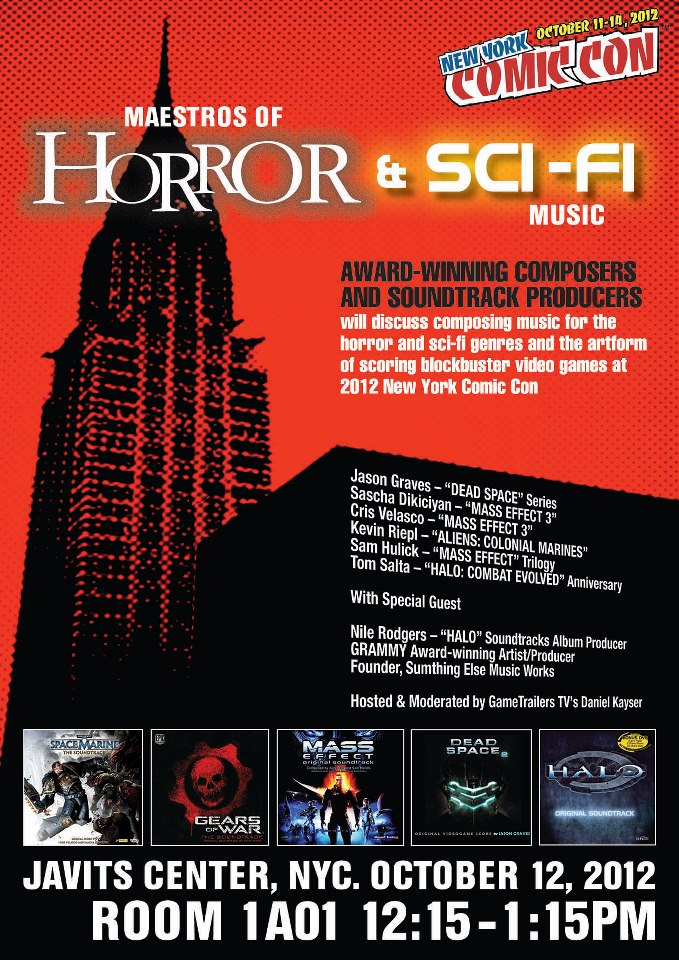 Also on Friday at 12:30 will be a panel on Greg Pak’s Vision Machine, this time discussing the new iPad app with voice-over work from Phill Lamarr, who will also be on the panel.

On Saturday, there’ll be a Quick Draw/Improv Draw  at 5:15 on the Variant Stage featuring the talents of Laura Lee Gulledge, Raina Tegelmeier, Dave Roman, John Green, Zack Giallongo and Ryan Sias.  LLG, Raina and Dave were part of one of  these at last year’s Brooklyn Book Fest and it was awesome.

On Sunday at 4 PM there will be a panel titled “Getting Graphic with Girls: Empowering Girls and Addressing Issues through Paneled Pictures” featuring  Colleen Venable, Cecil Castellucci, Laura Lee Gulledge and Lucy Knisley that will be moderated by Sheila Keenan, Senior Editor at Scholastic books.

These are the panels I was able to learn about from the people in them and on websites other than the NYCC official site.

Here’s some other information from both the NYCC site and other places that caught my attention:

The official launch of the MacGyver comic by creator Lee Zlotoff and Tony Lee with art by Will Sliney will take place.

Young Adult author Tahereh Mafi will be signing copies and ARCs of her supernatural superhero series SHATTER ME.

Here’s a few not the usual guests who actually caught my eye (certain artists and various celebrities are expected at this point, like DC and Marvel artists and people like Seth Green, but I want to focus on the “Wait, really?”):

Professional wrestler/sports entertainer Booker T, who recently had written a book about his time in prison before his wrestling career.

Manga genius and creator of Urotsukidoji, Toshio Maeda shall be tabling.

Square Enix and Dark Horse are pulling out all the stops, bringing Yoshitaka Amano, art designer for the Final Fantasy games.

Longtime TSR/Dungeons & Dragons Painter and concept artist Brom, who has also done his own comics, and artwork  for film will be appearing.

The biggest shocker is that on Kid’s Day (Sunday), Elmo and the third and longest running Gordon of Sesame Street will be appearing.  I hope Elmo also means that Kevin Clash will be there as well.

As the convention comes closer I am sure there will be so much news and information overload I won’t be able to handle it.

There’s no knowing why Bill Paxton or Christopher Lloyd are there.  Who knows what films will be presented or shown or discussed in IGN theater or what video game companies will bring or what secrets or surprises could come forth.  The show will be bigger than ever and that’s both a good and bad thing.   Either way I’m excited, no matter what.