As I continue to work through and edit my few hours of footage shot at MoCCA Fest 2012 into a comprehensive, but entertaining and enjoyable not longer than 25 minute mini-document I felt I would proceed with a written look at my experience by properly cataloging and talking about the many comics and stuff I purchased, perused or was interesting in purchasing till that thing called limited funds hit its eventual wall.

If you are really just waiting for the video edition I give you a special gift as a reader of Pop-Culture Spectrum.
This link and the following embedding will bring you to a hidden version of the entire 9 minute set done by Daniel Johnston as part of the After-Party on Saturday night.

STUFF I WAS ABLE TO BUY

Uncanny Very Near Mint #1 & Very Near Mint Vol. 2:  I first got introduced to Justin Petersen’s Very Near Mint in 2011 at the very short time I was there.  After reading it I was ready for Volume two and now a year later I finally have it.  The closest thing I can compare the book to is CLERKS.  Well, more accurately CLERKS: The Cartoon.  On a day when two comic shop owners don’t get their weekly shipping, a new shop opens across the street and everything goes to hell and that’s just the beginning.  Funny, action packed, awesome characters, friendship, love, betrayal, conspiracy, all rolled up in a nice package.  Now I can’t wait for Volume three!  The Uncanny extra one-shot added some great history and character development which made the VNM universe even larger and real than thought before, so a definite must have.

Space Box #1 and The Taco Way of Finding Happiness:  These two minis are by Nate Bear who also does awesome designs for shirts, stickers, prints and more.  His art style is one that I find myself immediately attracted to.  Slightly sloppy, super cute.  Taco Way is done like a self-help book from a dog while Space Box is a full on short comedy piece.

Win Some, Lose:  Not much to say about this one because of the circumstances.   I actually almost felt pressured to by this, as I was caught distracted while making a purchase at the table next to this guy’s and it was his friends who forced it on me and I wasn’t in the mood to be rude (tip to Simon if he ever does any other conventions, don’t let this happen).  Simon Reinhardnt‘s art definitely needs some work, but I will say that the writing on this while a little cliched was actually a good preamble that could lead a larger more expanded version of the same work if redone with much stronger art and a longer stretch on the beats.

Showman? The Bret Braddock Adventures Vol 1 & 2:  David Blumenstein’s collections of his awesome webcomic were actually on a checklist of things I knew I wanted to purchase at the show and the books (as well as the writer/artist himself) delivered in every way possible.  The second volume actually goes beyond what the comic online is up to… as there are about 20 strips to go on the web.  Seriously hilarious, I’m really curious to see what David comes up with after!

Our Broadcast Day-Comics About Television Shows:  Pat Lewis “curated” this awesome little collection of hilarious stories, including his awesome Sesame Street meets L&O parody.  This little book deserves to be bigger but if delivers hilarity of seven brands with Alex Robinson‘s imagining of Mad Men in the 70’s and the dearly departed Dylan Williams with artist David King‘s side story from Leave it to Beaver “taking the cake” of the collection.  The cover is a little deceptive with it’s Angela Lansbury, Jaleel White and Ellen Degeneres images, so if those comics exist anywhere, I hope they see print one day.  If not, an Our Broadcast Day Issue 2 needs to happen.

So Buttons #4: Jonathan Bayliss is a really good writer and he’s been fortunate enough to have most of it drawn by T.J. Kirsch, David Beyer Jr., Tim Ogline and more .  In the newest collection though the ante gets upped as he has a story drawn by the one and only Fred Hembeck and work from Noah Van Sciver.  He had a special preview book of the next issue as well with an awesome Tom Sciolli cover.  His work is all slice of life and personal, but very funny and very good.

Lars the Last Viking Goes To The End of the World:  Another Caravan of Comics book that I planned picking up without a doubt. Matt Taylor‘s work is very evocative with powerful blacks that just make the book look like woodblock paintings.  I also love that as exciting and action packed is being a Viking tale, it’s also really funny.

BLUE:  This is the one majorly distributed book I got as Top Shelf is handling it, but I chose to get it direct from its creator Pat Grant at the Caravan of Comics.  Based in the history of Australian surfing comics it features stunning double page spreads.  One of my favorite comics people, New Zealand’s Dylan Horrock’s even wrote the mini intro which adds definite coolness.

Trip City Visitor’s Guide 2012:  The first print publication from the web collective puts some excellent prose from the likes of Dean Haspiel, Christopher Miskiewicz and Jefferey Burandt into print along with illustrations and art from Jen Ferguson, Eric Skillman, Jennifer Hayden and more.  It’s an excellent primer for the site, and a great little tome as well.  Digital may be the future, but print will/should not ever die.

Rat Bastard – Small Does #1:  Over 10 years ago, Cliff put out the first Rat Bastard comic.  The six issues that exist have long been amongst a favorite in my collection, always easily accesible for re-reading.  When Cliff came back at last year’s MoCCA I was saddened that RB was at the time only planned for a webcomic, so I am more than super ecstatic that he has survived very rough health problems and come back in full swing, even helping to put together an original convention in Asbury Park, NJ the weekend of May 12th.

The MidKnight Marauder: I’ve been waiting to see what mural/graffiti/canvas artist LogikOne would do with a full fledged superhero comic for awhile now.  His graffiti work always had that dynamic and he created visions that spoke of a larger universe.  Finally, Anthony Pugh (Logik’s true name)  has put together that comic and it is intense and hard hitting as I expected.

The Potter’s Pet:  Written and illustrated by the current team on the Adventure Time comics series, Shelli Paroline and Braden D. Lamb, this is a simple parable with great art work and humor.  I’ve enjoyed Shelli and Braden’s work through the three excellent Star Wars anthologies they were in, as well as Shelli’s work on various BOOM KIDS! Titles.

The Face Skull:  Pat Dorian’s humor reminds me highly of Ivan Brunetti.  Dark, sadistic, off the cuff, but very real and powerful.  He uses a Spectre-esque parody to deliver completely surreal images that are gruesome and hilarious.  Pat uses the “host” of Face Skull to make great quips on life’s foibles, but mostly on the idiocy that exists in corporate illustration work.  It makes for fine comic booking.

Blindspot #1 & #2:  I’m not sure how I ever missed the first issue of Joseph Remnant‘s short stories collection book, but reading the work you can easily see that on top of the just published Harvey Pekar’s CLEVELAND which he illustrated, Joseph is an amazing story teller himself.  He has that knack of just funny, interesting realistic writing that one can see in many of his fellow colleagues and constituents,.  The closest comparison I can think of for a layman that might create an image would be Daniel Clowes’ Eightball as it created two films the public might now best.

CELLS 1 & 2:  One of my last purchases of the weekend, I was glad my eyes pulled me into the amazing covers by Nate Wooters.  These books are cute and yet at the same time gorgeous.  One of the really cool things is his illustrated outro page.  Instead of just having a page of text, he draws it out as a comics page and it really works and adds something special.  I also like how he polls his readers to choose an element for the story since he has way too many to use and they’re all good.

Hurt Heart Voice Box figure by Noah Xifr:  The best way to explain this thing is to just show it: 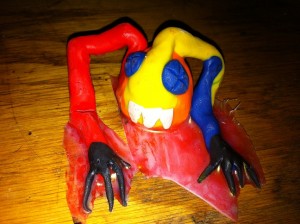 I’m kind of a toy fiend, especially one of a kind or super limited type of toys, plushes, etc.  but I have to be careful as they get super expensive

Gastrophobia Volume 2-Amazon Attacked!:  I would’ve definitely purchased this at MoCCA if I hadn’t pre-ordered through David McGuire’s Kickstarter which guaranteed me a copy if for some reason I
couldn’t make the show and also got me a really cool button.  Gastro is an excellent strip and one that I highly support and look forward to further volumes as they come out.

For all the purchases I made there’s all the purchases I didn’t get to make and what make the show so amazing so with the assistance of business cards I’d like to mention creators who caught my eye and could’ve easily broken my bank account.
Eric Alexander Arroyo
Greg Kletsel
J. Sjostrom
David Boyle
Joshula Boulet
Heidi Black
Joel C. Gill
Antonio Romero
Micheline Hess
Alphabet Horror Vacui
Sarah Benkin
Maria Scrivan
A Riot Storm Productions
Spike & Sass
Wu Gene Hong

All together this year’s MoCCA Fest had really showed the event finding its perfecting footing inside the 69th Armory with a great room with plenty room and plenty to explore and if one has pockets deep the ability to walk away with some amazing works and if their pockets were less deep they got an assortment of adventures, a few free comics here or there, and amazing panels and even art workshops and they helped out a great organization like the Museum of Comic and Cartoon Art.

The video presentation shall arrive sooner than later and still be timely for all the comics it promotes. As well as all the panel sessions which were timeless instead of announcements of upcoming projects that needed to be out to the public in a set time.

The convention as stated in the opening is a celebration about the history, present and future of comic art and a must go event. Make sure to visit the museum when you’re in New York, check out all the comics I linked here and come to the show next year.