above image created by Rick Parker

The 10th Annual MoCCA Fest is coming up this coming weekend April 28-29th, located for the fourth year at the 69th Regiment Armory on Lexington Avenue between 25th and 26th Street on the island of Manhattan in New York City. I have attended the fair since 2002, and actually before that when it became a conception when the 2011 Small Press Expo in Maryland was canceled.

Every year it has provided me with a great chance to catch up with friends, discover new comics, hear amazing stories, get awesome original sketches, and feel like a part of history as through its panels it preserves the history of comics just as the museum does, while creating a new history by embracing the next line of comics through the fair which features many times students, independent comics artists who expand the pantheon and artists from around the world including Norway, France and this year as you’ll see below a cadre from Australia.  By being located in a central location not far from Madison Square Park and tons of awesome restaurants and with exhibitors who sell as many prints, t-shirts, pins, stickers, and even plushes as they do comics, there’s actually something for everyone!

For this year’s fest I’ve decided to do a pre-fest look at things that have been announced as debuting or being specially promoted for the event. That list is quite long, but I’ve chosen a selection that I feel gives you a good guide of NOT MISS items while divulging in the very large and expansive show, which includes excellent panels as well.

Hans Rickheit will be officially debuting his newest graphic novel Folly: The Consequences of Indiscretion 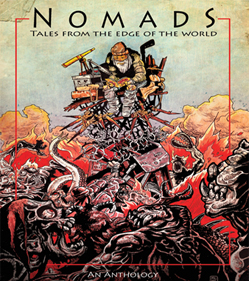 The absolutely stunning NOMADS – An Anthology will be available. It’s 40 pages of full color and seven amazing artists.

One of the most exciting things has to be what is being called Caravan of Comics. 12 artists from Australia will be traveling across America hitting various conventions and shops. Their first convention will MoCCA Fest. Among the talented group are David Blumenstein, who will bringing the two collections of his comic Showman? The Adventures of Brett Braddock, Pat Grant debuting the American edition of his comic BLUE through Top Shelf, Matt Taylor will be on hand with his comic Lars the Last Viking Goes to the End of The World, Jen Breach should have two comics with her, one drawn by Doug Holgate called Clementine Hetherington and the other drawn by Jase Harper called Humans Are The Weirdest. They’ll be lots of more, but those are some highlights.

The female collective of Coffee Spoon Comics will have a new collection available and I’m sure as many copies they have left of their individual minis as well. The collection will be a music issue and this great short is one of the stories.

Lawrence Gullo, best known for Baritarian Boy, should have a newest book called My Surgery available.

789 Studio’s Rain: A Collection, which received its backing and support through Kickstarter will be making its official debut at the show. 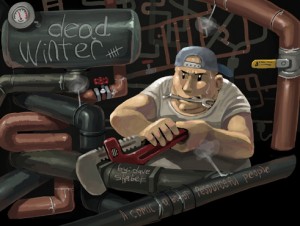 Dave Shabet will be there with the collected edition of his comic Dead Winter and who knows what else.

Sean Ford will be debuting his book Only Skin published by Secret Acres.

Alexandra Beguez and Kim Ku are sharing a table and they have a fascinating assortment of mini comics and prints. 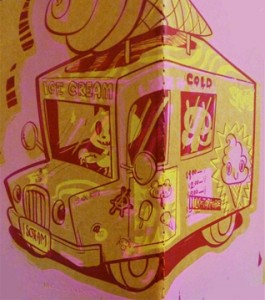 Thomas Baehr will have his newest POLE-The Comic Strip with Penguins collection Make Guano Not War.

The Adventuring Comapny will be there with with the recently released Very Near Mint Vol.2 and more.

Nate Bear does a lot of stuff including mini comics, but one of the cool things he has is this new I Scream Truck print that I’m sure will be at MoCCA Fest. Do not miss this table, his work is great.Anthony Pugh, the artist aka LogikOne will have a self-published book on hand. As a long time fan of his works I’m excited by this.

Juan Nunez will have the first issue of his mini-series Cabeza available.

Holly Foltz will have issues 1-3 of her comic Unpleasant People at her table. 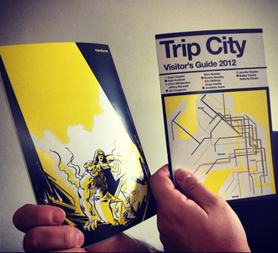 Lesser Key Studios will have their stunning Ianuae available, as well as stickers and buttons. 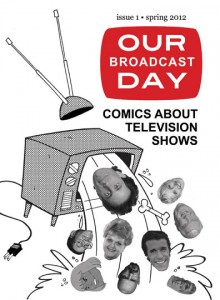 Trip City which features work from Dean Haspiel, Jennifer Hayden, Dan Goldman, Seth Kushner, Nick Abadzis and many more will be offering the Trip City Visitor’s Guide.
Pat Lewis is going to have an anthology of comic stories about television called Our Broadcast Day. This should be worth it for the “Mad Men” story by Alex Robinson on its own.

Fantagraphics are bringing a cadre of books in limited supplies as debuts, many of them not officially coming out to stores for months!

All this doesn’t mention many folks who I am excited to see who haven’t announced what they’ll have at the fest, sometimes bringing complete surprises or not wanting to a reveal and then have something go wrong. Do yourself a favor and check out the list of of exhibitors.

On top of the exhibit/merchandise/fest room there’s also the panels which are always exciting. You see the whole schedule at the MoccAFest site, but here’s a few selections of interest.
SATURDAY
either in ROOM A or B (check the schedule for updates and during the convention)2:15 P.M. Gary Panter receives the Klein Award, presentation by Bill Kartalopoulos
3:15 P.M. Comics creator Hans Rickheit in conversation with
4:15 P.M. “Harvey Pekar’s Final Projects”: Jeff Newelt (editor of The Pekar Project) and artists Joseph Remnant (Cleveland) , Rick Parker, Sean Pryor, Dean Haspiel (The Quitter) and JT Waldman (Not The Israel My Parents Promised Me) celebrate the life and work of comics pioneer Harvey Pekar with his widow, writer Joyce Brabner.

11:15 P.M. Rick Parker Drawing Workshop. Rick is an incredible teacher and can teach something new and interesting to people with no experience to total masters of the craft.

5:15 P.M. Animation! Every year the show’s ending panel is cartoons from folks also involved in comics. This year the two main features are Devin Clark of Ugly Americans and Aaron Augenblick, whose studios has worked on Super Jail, Ugly Americans, Wonder Showzen and some awesome shorts.