It’s All About Hair Transplants 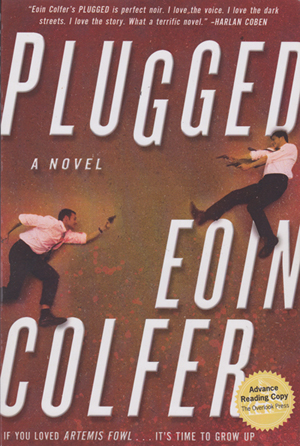 Best known for the crazy and wild antics of boy genius ARTEMIS FOWL, as well as what is concidered the sixth book in Douglas Adam’s Hitchhiker’s Trilogy, …AND ANOTHER THING, Eoin Colfer’s first tackle at crime noir drama is painstakingly brutal, humorous and nail biting.

Before I approach my scattered, possibly altered thoughts on the awesome PLUGGED I want to address the concept of ...AND ANOTHER THING being titled the SIXTH book. In essence this is untrue and discounts Doug’s unfinished, but still published posthumously SALMON OF DOUBT. Originally constructed to be the third book in the Dirky Gently series and indeed pretty much published as such, it is fairly known that Adams intended for it to become the “final” chapter in Hitchhiker’s. While …AND ANOTHER THING is a cleverly written book in which Eoin proves his stellar writing abilities, it really should be titled NOT REALLY, BUT KIND THE SOXTH BOOK, NOT THAT ANYONE”S COUNTING PER SE (or something akin to that).

In PLUGGED, Eoin brings us into a very bleak, troubled world, one that is cloistered, hidden, almost like a darkened stranglehold. It’s a place few would venture and even fewer would even consider. Yet it is also bitingly funny. There is an intense amount of dark humour (sic) in this book. It is mozzenfocking crazy I’m telling you. It is also pure modern noir and while reading it I could not help but envision it as a film. Although my cast isn’t completely not locked down. While it seems a perfect vehicle for say Vinnie Jones or Jason Statham, I also envision it being something Colin Farrell could bite his teeth into. Possibly Stuart Townsend, or maybe even Cillian Murphy. If it was 10-15 years ago it would easily be something Gabriel Byrne, Pierce Brosnan and Liam Neeson would be fighting each other for. While all those actors are very different, they all have a few things in common. They’re Irish, they can pull off being creepy badasses, and they have the acting talent to be a leading man who is serious, cynical, slightly crazy and amazingly charming all in one breath.

That is exactly what lead character in PLUGGED is. In my Unrevised and Unppublished edition I have for the use of this review his name is Dan McEvoy, but marketing on Amazon.com suggests this was changed Linc, which is short for Lincoln. I’m really hoping this is wrong, as Daniel just works way better. At least in my opinion.

On top of Daniel, the book is filled with amazing characters, all of them also larger than life, full of grit, and feeling all like they’ve stepped out of a 1930’s Dashiell Hammett novel, read a primer on the last 70 years of history and jumped right back into modern times. You got a wacky unlicensed doctor, a slimy sleazeball lawyer with mafia ties, a smalltime gangster who’s the big fish in a little pond, the crazy broad upstairs, the dyke like cop with sex appeal. Plus you have all the plot twists one would expect, conspiracy, murder, betrayal, coverups, drugs, smuggling, etc.

Is this starting to sound more like hype than a book review? That tends to happen when I really enjoyed something. I start overselling it. Maybe I want it to be mine and no one elses, but that wouldn’t be fair. People who enjoy a good detective mystery crime drama noir with messed jokes and crazy surrealism shouldn’t miss this one.