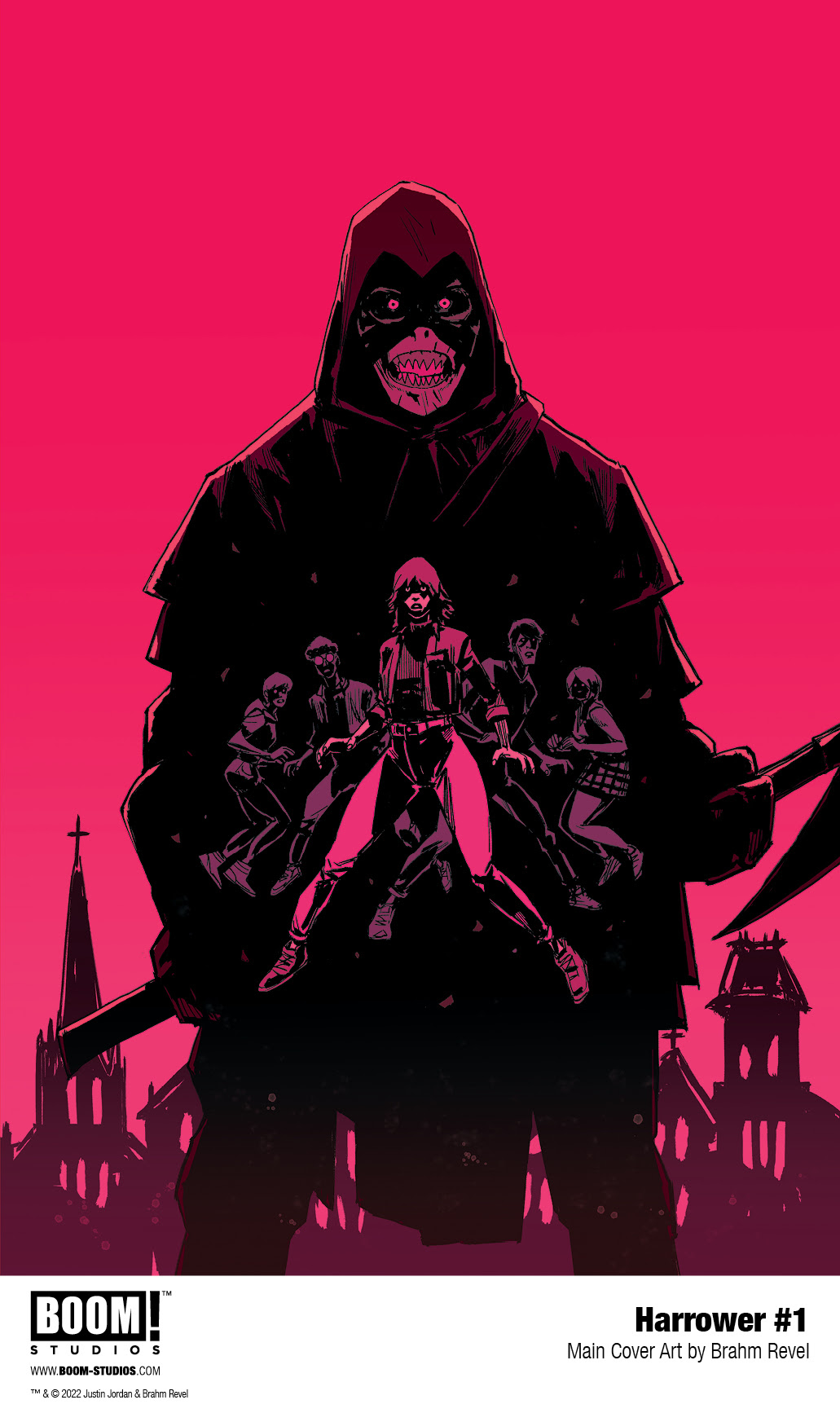 There’s nothing to fear in the quaint town of Barlowe, New York–except, that is, for the Harrower. The children wish this boogeyman was just an urban legend, but this purveyor of puritanical vengeance against the unrighteous is very real, and there’s no escape, because the Harrower seems unkillable, and spans generations, always returning…

What secrets will Jessica Brink, a teenage girl obsessed with the Harrower, uncover, and will she be able to escape the pull of her morbid fixation?

Justin Jordan is a comic book writer based out of Pennsylvania. He is best known for his original comic book series such as The Strange Talent of Luthor Strode, Spread, and Reaver with Image Comics, Urban Animal with Webtoon, and Breaklands, as well as his work on Green Lantern: New Guardians and Superboy for DC Comics.

“I love horror, and don’t get to write as much of it as I’d like. In HARROWER, I want to introduce people to a place where the real horror isn’t the legendary killer stalking you but the secrets that spawned them.” said Jordan.

Brahm Revel is a comic book artist and writer best known for his creator-owned book Guerillas, published by Oni Press. He has also worked for Marvel, Image Comics, First Second, and IDW, most notably helping to develop Jennika, the newest Ninja Turtle, for the TMNT Universe. He currently lives and works in Barcelona, Spain.

“I’ve been a fan of Justin’s comics for a long time and I’m super excited to be able to collaborate with him on HARROWER. It’s a super fun take on the slasher genre with a very interesting riff on why these bad guys continue to stalk the teens of today. It’s right in line with my sensibilities and I can’t wait to show everybody what we’ve been working on!”said Revel.

“HARROWER is your next favorite slasher hit, with Justin and Brahm at the helm bringing a tightly-packed horror story with all the best elements of the genre in a new and interesting way,” said Jon Moisan, Acquisitions Editor, BOOM! Studios.

HARROWER  is the newest release from BOOM! Studios’ eponymous imprint, home to critically acclaimed original series, including BRZRKR by Keanu Reeves, Matt Kindt, and Ron Garney; Something is Killing the Children by James Tynion IV and Werther Dell’Edera; Once & Future by Kieron Gillen and Dan Mora; We Only Find Them When They’re Dead by Al Ewing and Simone Di Meo; Eve by Victor LaValle and Jo Mi-Gyeong; The Many Deaths of Laila Starr by Ram V and Filipe Andrade; Wynd by James Tynion IV and Michael Dialynas; Basilisk by Cullen Bunn and Jonas Scharf; Grim by Stephanie Phillips and Flaviano; Briar by Christopher Cantwell and Germán García; Stuff of Nightmares by R.L. Stine and A.L. Kaplan; The Approach by Jeremy Haun, Jason A. Hurley, and Jesus Hervas; Damn Them All by Simon Spurrier and Charlie Adlard; Behold, Behemoth by Tate Brombal and Nick Robles; and the upcoming Specs by David M. Booher and Chris Shehan; Once Upon a Time at the End of the World by Jason Aaron, Alexandre Tefenkgi, Leila del Duca, and Nick Dragotta; Know Your Station by Sarah Gailey and Liana Kangas; A Vicious Circle by Mattson Tomlin and Lee Bermejo; and Mosely by Rob Guillory and Sam Lotfi. The imprint also publishes popular licensed properties, including Dune: House Harkonnen from Brian Herbert, Kevin J. Anderson, and Michael Shelfer; Mighty Morphin Power Rangers from Melissa Flores and Simona Di Gianfelice; and Magic from Jed McKay and Ig Guara.

Print copies of HARROWER #1 will be available for sale in February 2023 exclusively at local comic book shops (use comicshoplocator.com to find the nearest one) or at the BOOM! Studios webstore. Digital copies can be purchased from content providers, including comiXology, iBooks, Google Play, and Kindle.

For continuing news on HARROWER and more from BOOM! Studios, stay tuned to boom-studios.com and follow @boomstudios on Twitter. 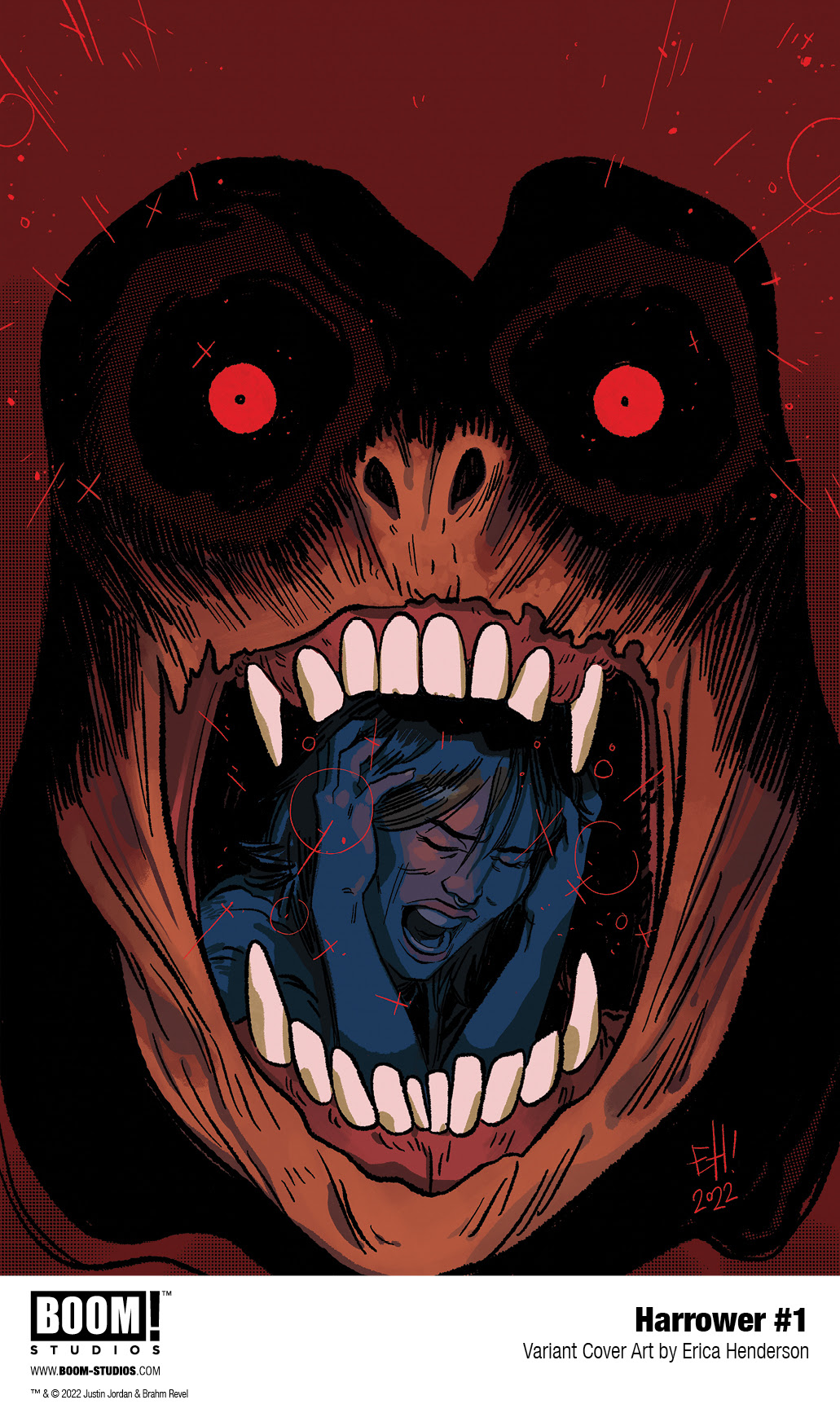 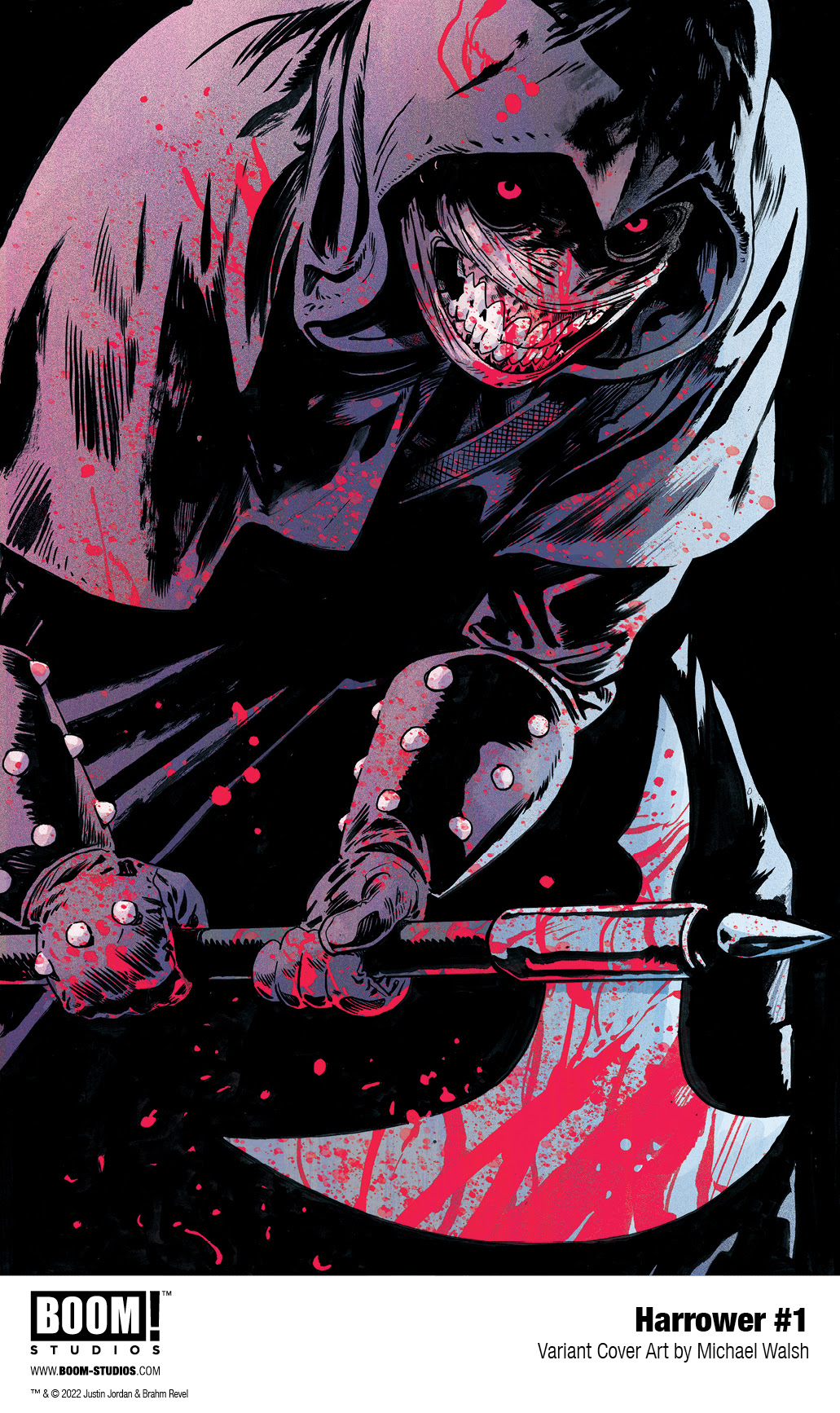 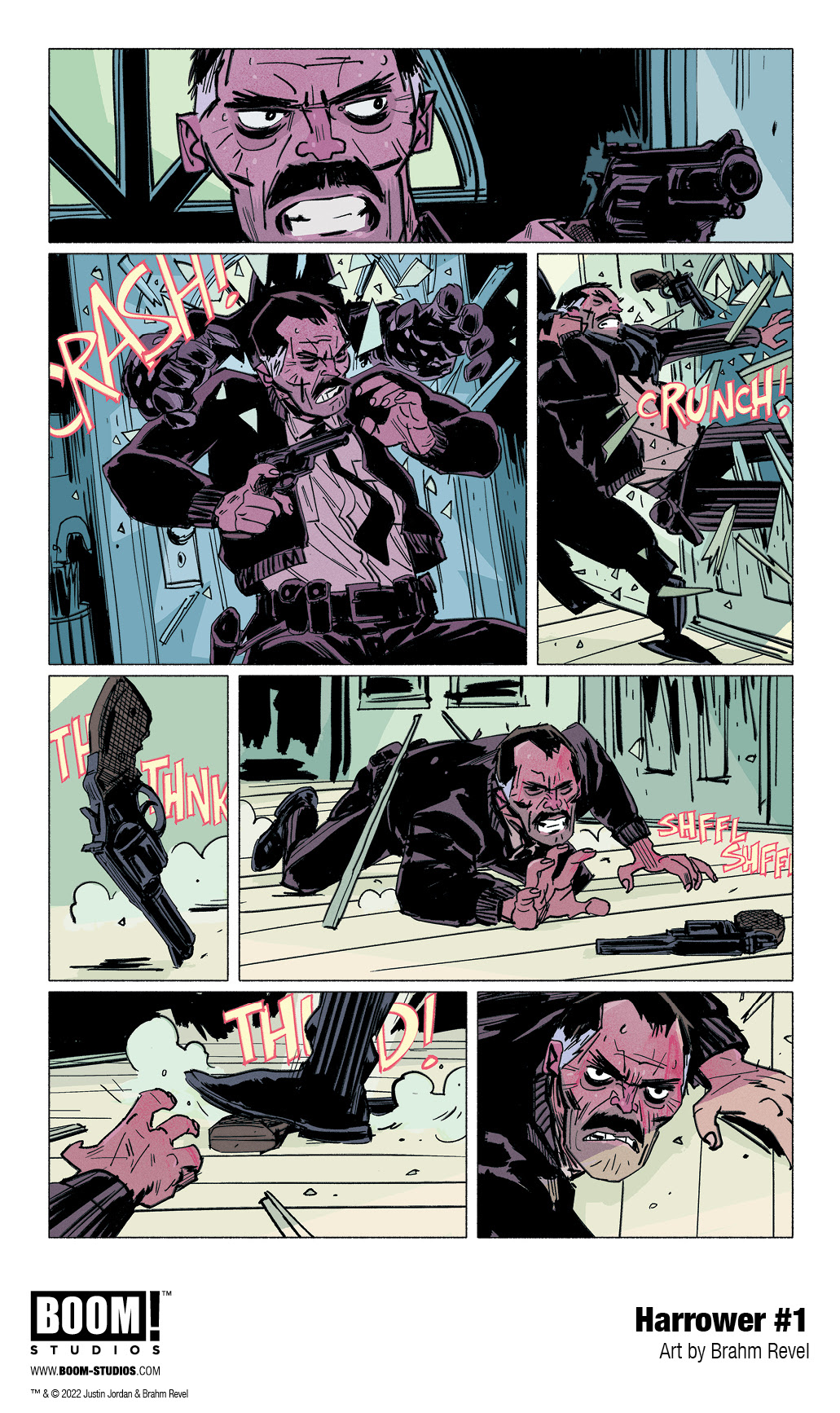 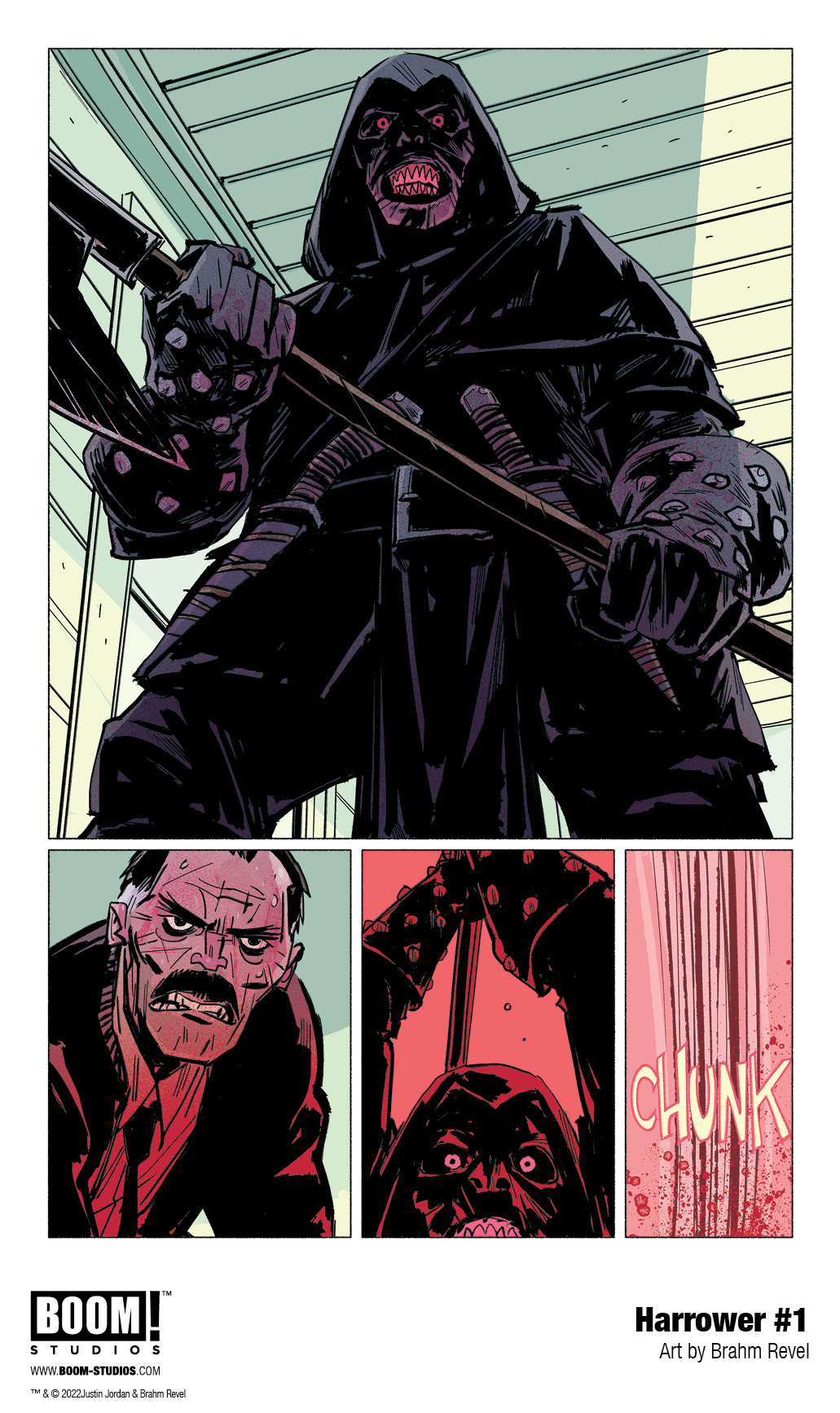 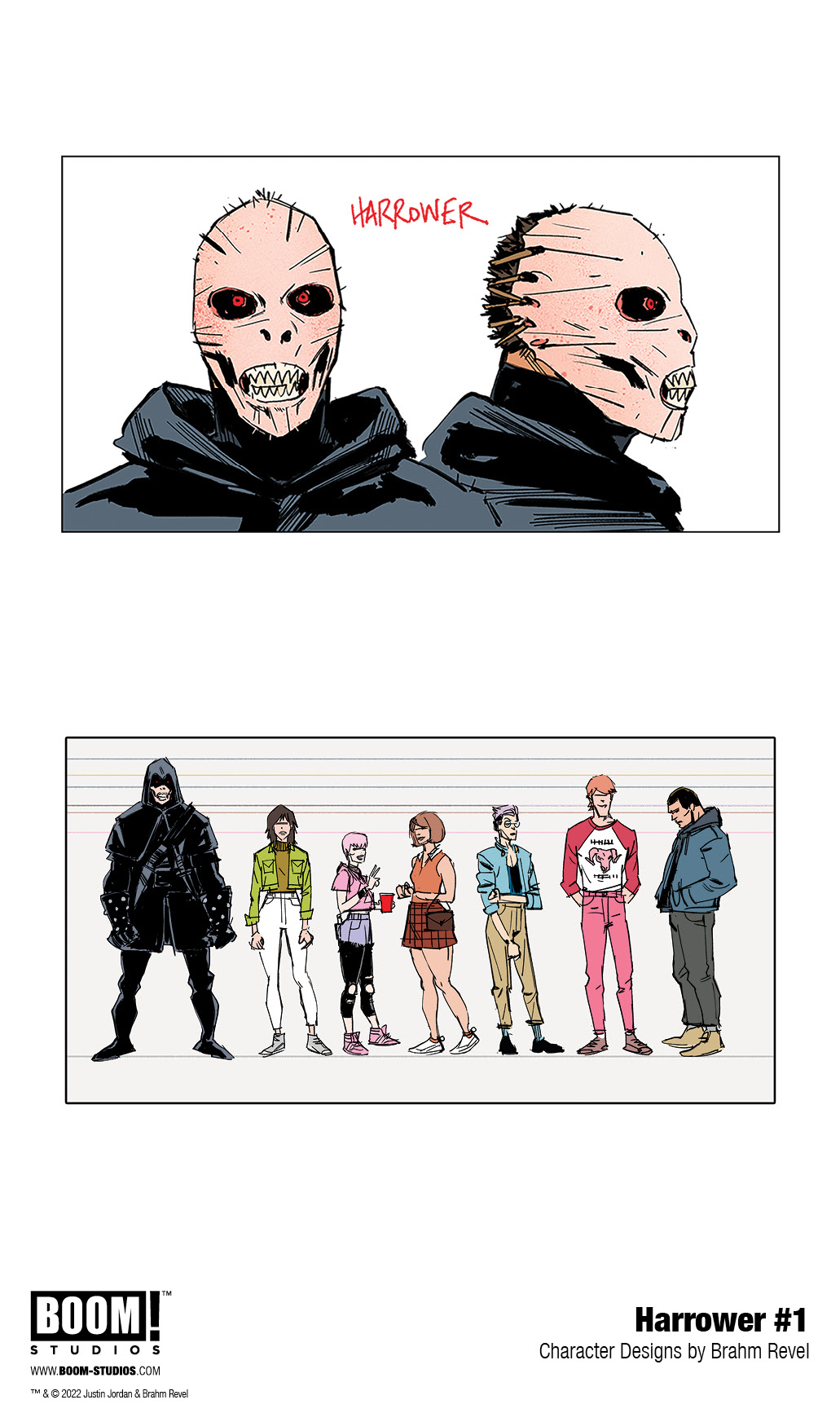 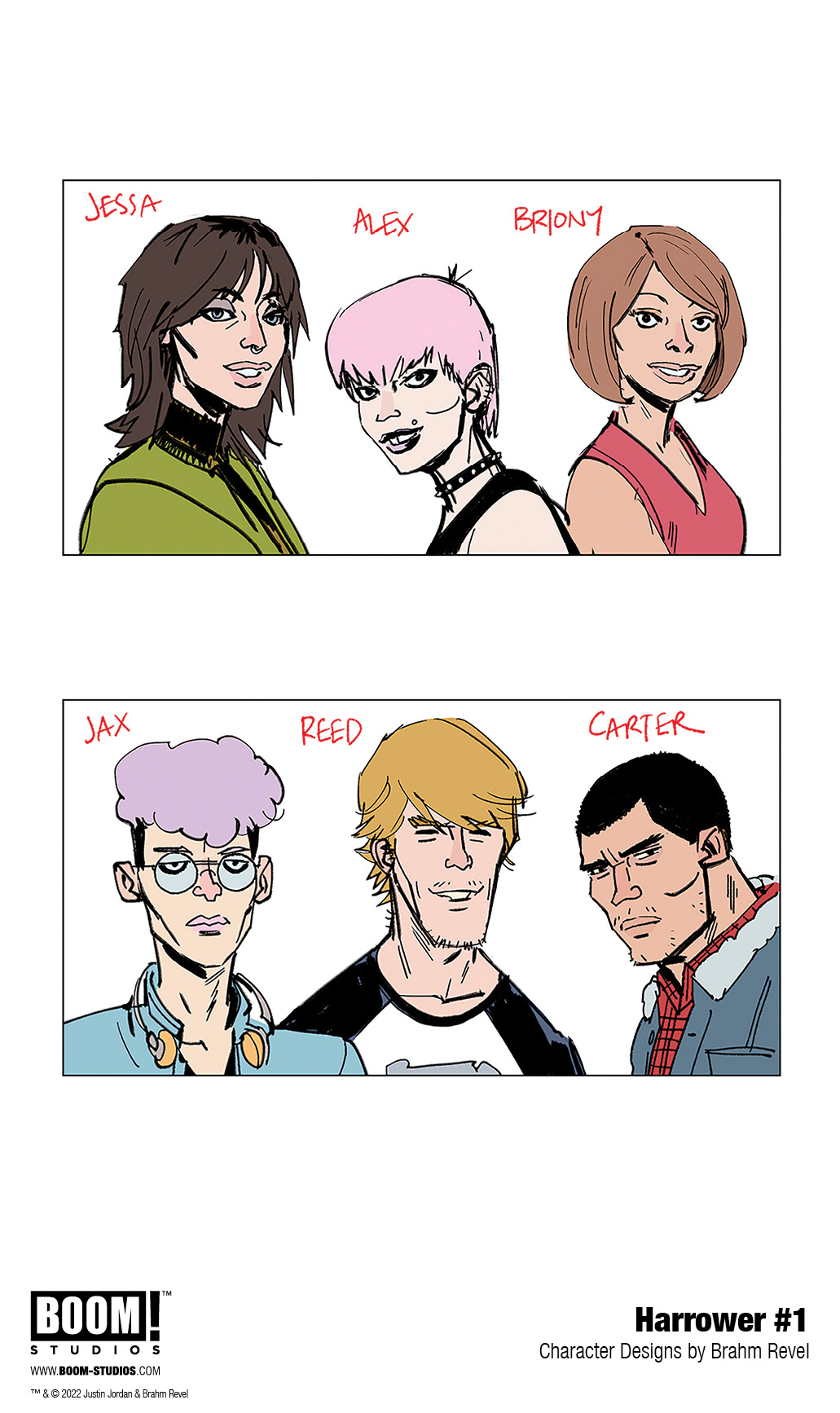