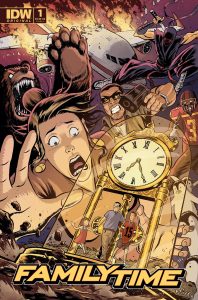 SAN DIEGO/LOS ANGELES, CA (August 25, 2022) – IDW (NYSE American: IDW), a leading media company providing uniquely compelling stories in various genres for global audiences across all entertainment platforms, today announced a new co-development deal with writing duo Matt Silverstein and Dave Jeser (Drawn Together, Solar Opposites, Accidental Love). Under the partnership, the team will develop and produce the sci-fi comedy, “Family Time”, into a television series and original comic book property. The comic is scheduled for release next summer. Writer James Asmus (Quantum and Woody, Survival Street, Gambit) and Artist Edison Neo (Snake Claws, No-Brainer, Tights) are also attached to the project. This is the first of many creative partnerships that leverage IDW’s experience and resources to develop stories that reach audiences through a variety of ways.

“At IDW, we are perfectly poised to develop properties that live in the same universe, across various platforms,” said Nachie Marsham, Publisher, IDW. “We’re thrilled that our first Entertainment and Publishing co-development project is with Matt and Dave; their comedic talent is off-the-charts. We know their vast background, combined with IDW’s robust expertise, will produce great content, both in print and on-screen.”

“Working in tandem with our colleagues at every level within our Entertainment and Publishing divisions brings a wealth of opportunities for writers, producers, and other creatives to develop projects across various verticals simultaneously,” said Paul Davidson, Executive Vice President IDW Entertainment. “It’s an ideal landscape for a creator’s vision to be realized.”

Silverstein and Jeser have been creating together for more than 20 years, first writing and producing segments for Comedy Central’s Crank Yankers and Drawn Together, as well as Andy Richter Controls the Universe, Golan the Insatiable, and Solar Opposites.

“We couldn’t be more excited to be working with the entire IDW team, who are exquisitely talented, collaborative, and as charming as we are,” said  Silverstein and Jeser. “We appreciate being given the opportunity to fail and we truly look forward to doing just that.”

“Family Time” falls within IDW’s recently announced slate of new original projects that include Dark Spaces: Wildfire, Trve Kvlt, Crashing, Earthdivers, Dead Seas, Golgotha Motor Mountain, Arca, The Sin Bin, and The Hunger and the Dusk. IDW is currently in negotiations for numerous other co-development projects that will also leverage this unique partnership opportunity. Jonny Gutman, Vice President of Original Series, and Julie Winograd, Director of Development, will run point on the development of the series adaptation for IDW Entertainment.