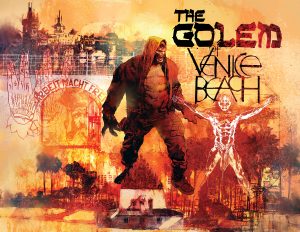 (June 6, 2022) Superstar artists Michael Allred, Stephen R. Bissette, Jae Lee, Nick Pitarra, Paul Pope, and Bill Sienkiewicz and legendary letterer Clem Robins are teaming up with rising star artist Vanessa Cardinali and debut comic book writer Chanan Beizer to create an all-new graphic novel, The Golem of Venice Beach. This 152-page epic story about the adventures of a 400-year-old Golem spans from 16th century Europe, to the horrors of World War II, to modern day Venice Beach, where the Golem has become entangled in a war between a gang and the police. Both a riveting narrative and a celebration of Southern California, The Golem of Venice Beach is now on Kickstarter, featuring a wrap-around cover by Sienkiewicz. 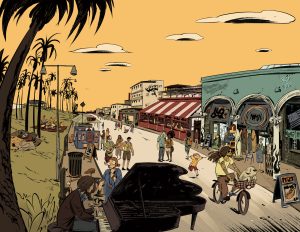 In 2018, Chanan Beizer’s script for The Golem of Venice Beach won the very first ScreenCraft Cinematic Book contest for graphic novels. For the past three years, Beizer has been working with Eisner-Award winning editor Chris Stevens (Little Nemo: Dream Another Dream) to bring the story of the Golem to life with a dream team of artistic collaborators, including five Eisner-award winning illustrators (Allred, Bissette, Lee, Pope, and Sienkiewicz), as well as Nick Pitarra (co-creator of The Manhattan Projects), and the main artist, Vanessa Cardinali, a brilliant Italian artist who is currently making waves with Image Comics’ Slumber.

The Golem of Venice Beach features:

“As a writer I know that story is important, but in comics if the art isn’t working, the story really doesn’t matter,” said writer Chanan Beizer. “It’s been truly thrilling to witness the artistic interpretation of my words. Every artist involved has left a lasting imprint on The Golem of Venice Beach. They’ve elevated the story beyond what I could ever describe on a two-dimensional piece of paper. That is what art should do.”

In The Golem of Venice Beach, Adam is a Golem, a creature of vengeance and destruction, of violence and death. He was created 400 years ago, a world away in Eastern Europe, but today he lives in Southern California. Adam spends his days adrift on the sunny boardwalks of Venice Beach, pining for release from his lonely existence. His only hope is the clueless Jake Loeb, the sole remaining heir of the Golem’s creator. But when Jake becomes involved with a mysterious tattooed woman and a drug-dealing death worship cult, things get complicated and dangerous for Adam. Golems are not meant to walk the Earth forever. Can Adam make a difference? Can he find peace in the California sun? And can a monster have a soul?

“When Chris asked me to draw this story, the first thing that interested me was the presence of a fantastic component,” said artist Vanessa Cardinali. “Creating ‘not real’ characters or worlds like the Golem continues to be one of the parts of this job that I enjoy the most! It was also very interesting to work on a story specifically set in Venice Beach: I’ve seen so many of those photos that I feel like I’ve been there now! In addition, the opportunity to work with the long list of comic superstars involved was truly unmissable.”

Notable pledge tiers for The Golem of Venice Beach include early bird pricing specials, Kickstarter exclusive prints by all the artists, and a limited-edition deluxe Sienkiewicz variant hardcover. For updates, follow Clover Press on Twitter, Instagram, and Facebook. To support the campaign, visit Kickstarter: https://www.kickstarter.com/projects/cloverpress/the-golem-of-venice-beacha-graphic-novel-by-chanan-beizer?ref=1xgdii.

This entry was posted in Books, Comics, Kickstarter. Bookmark the permalink.