This Kickstarter, now available looks amazingly wonderful. As a fan of Yuzna’s work, Tiki mugs, and the horrible Blood Island films I am very intrigued. 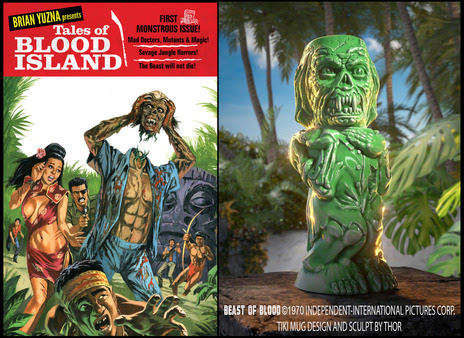 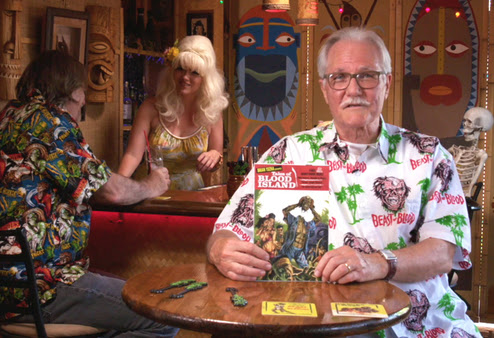 New York, NY, July 15, 2021 – Brian Yuzna, the legendary producer behind the 1985 film adaptation of the zombie horror classic, H.P. Lovecraft’s Re-Animator ®, has unveiled a Kickstarter, a crowdfunding campaign for a serialized comic book and Tiki-style monster mug line called BRIAN YUZNA PRESENTS TALES OF BLOOD ISLAND.  Based on a script by writers David Sehring and Mark Cerulli, Yuzna and Drive-In-Sanity Films plan to adapt the comic books for a filmed reboot of the franchise with Tiki-mug tie ins and ancillary merchandise to complement and elevate the promotional and marketing efforts for the production.

Inspired by the successful “Blood Island” zombie and creature feature franchise made in the Philippines by Hemisphere Pictures for the U.S. drive-in market from 1959 through 1970, the comic book incorporates key characters from the original films and more jungle thrills, strange science fiction & fantasy, and over-the-top monsters and gore that were the key ingredients of the Blood Island pictures as well as “Mondo Movies” and exploitation films from that period.

BRIAN YUZNA PRESENTS TALES OF BLOOD ISLAND, the comic book, is a movie series in the making with storyboard styling that screams “action” from artist Stephen Sistilli and coloring & lettering from Dexter Weeks.  Both Sistilli and Weeks worked on another Tiki-themed comic, Koni Waves for Arcana Comics from 2005 through 2010.  The first issue of BRIAN YUZNA PRESENTS TALES OF BLOOD ISLAND will be 36-pages in full color with three future issues planned for the initial run of the series.  Told in the style of classic cliffhanger serials and tropical tales from Men’s Adventure magazines and pulps, the new comic book features tiki terrors and non-stop monster mayhem, mixing and mashing up myths and folklore from around the world.

To coincide with the release of the comic books, there will also be more “blood in your eye” with a series of “mix-and-match” Tiki-style mugs based on the characters & creatures featured in the original movies and new comics.

The undying, green-blooded zombie, the Beast of Blood, is the first Tiki Monster mug in the line as sculpted by Tiki-fantasy artist Tom “Thor” Thordarson, who has held numerous executive titles with Walt Disney Imagineering, Universal Studios, Tiki Farm and other theme park and design companies.

THE STORY OF THE COMIC BOOK
BRIAN YUZNA PRESENTS TALES OF BLOOD ISLAND is a comic book re-boot and re-imagining of the classic Hemisphere Pictures’ Blood Island creature feature franchise directed in the Philippines by Gerardo de Leon and Eddie Romero in the 1960s and 1970s.   Romero went on to serve as Associate Producer on Francis Ford Coppola’s Apocalypse Now. Like Coppola’s Apocalypse Now, YUZNA’S TALES OF BLOOD ISLAND is set during the end of the Vietnam War, somewhere in the South Seas, on a mysterious, primitive island filled with a multitude of monsters & mutants. There, a soldier-of-fortune and an ex-war buddy team up for a top-secret mission to find and exterminate the murderous war criminal, Dr. Akira Lorca, whose mad experiments with evolution and a jungle plant serum, derived from man-eating trees, create a hideous, head-hunting, body-swapping beast that terrorizes the island population by feasting on and appropriating their blood and flesh.

THE STORY OF THE MUG
Produced in association with Bauer Pottery, one of the oldest ceramics companies in the United States, the Beast of Blood mug was designed and sculpted by Tiki fantasy artist Tom “Thor” Thordarson and is actually two mugs in one.  When stacked, the Beast of Blood Tiki-style mug is approximately 8″ tall.  Separated, the Beast’s disembodied head holds approximately 4 ounces of fluid while the Beast’s headless body holds approximately 8 ounces of liquid refreshment.  More color glazes and more beasts from the TALES OF BLOOD ISLAND comic books will be coming soon to mix and mash up with their fellow Blood Islander who was first made available, in a limited run, for the legendary Polynesian and tiki-themed Mai-Kai Restaurant in Fort Lauderdale, Florida for their Hulaween 2020 Drive-In event. The mug proved quite popular and was a sell-out.  All new color glazes and “blood splatter” editions will be made available to Kickstarter patrons of the BLOOD ISLAND campaign should it prove successful in reaching its funding goals.

ABOUT BRIAN YUZNA
Brian Yuzna is a Filipino-born American producer, director, and writer.  He is best known for his work in the science fiction and horror genres. Yuzna began his career as a producer for several films by director Stuart Gordon, such as Re-Animator® (1985) and From Beyond (1986) before making his directorial debut with the satirical body horror film, Society (1980).   Yuzna also served as coproducer and co-writer for the Disney comedy, Honey, I Shrunk the Kids (1989).  Yuzna was the first American filmmaker to adapt a manga, The Guyver (1989), into a live-action feature.  Yuzna also directed the horror sequels Silent, Night, Deadly Night 4: Initiation (1990), and Return of the Living Dead 3 (1993) before directing The Dentist (1996) and its sequel, The Dentist 2 (1998). He has helmed several adaptations of H.P. Lovecraft and went on to direct the sequels to Re-Animator:  Bride of Re-Animator (1990) and Beyond Re-Animator (2003).  While living in Spain in the early 2000s, Yuzna started Fantastic Factory with Julio Fernandez, a genre label under Barcelona film company Filmax which produced films for the international market (shot in English) using talent from all around the world.   After a successful run in Spain, Yuzna went to Indonesia and produced the horror film anthology, Takut: Faces of Fear (2008) and directed the 3D creature feature, Amphibious: Creature of the Deep (2010).  Yuzna is currently in development on a number of features in Hollywood and around the world, including an adaptation of the Tales of Blood Island comic book.

ABOUT DRIVE-IN-SANITY FILMS
Drive-In-Sanity Films is a production, marketing and distribution company run by David Sehring, a 37-year veteran film, television and creative services executive who has worked for Vestron Home Video, AMC Networks, including Shudder & IFC Midnight, as well as web retailer, Karmaloop.  While at AMC, Sehring won an Emmy for the doc Hollywood Rocks The Movies: The 1970s and created AMC’S Monsterfest (Now FearFest). Sehring also launched the first high-definition horror and creature feature channel, Monsters HD.  Sehring’s other credits include documentaries on the history of horror, sci-fi & fantasy including Behind The Planet of the Apes; The Alien Saga; The Fly Papers and Tales From The Crypt: From Comic Books To Television among others.   Sehring also worked on the theatrical, cable & digital VOD campaigns for the indie horror films, Maniac starring Elijah Wood; the Australian cult hit, The Babadook; and the notorious Human Centipede film franchise.  Most recently, Sehring served as an associate producer on David Gregory’s and Severin Films’ Blood & Flesh: The Reel Life & Ghastly Death of Al Adamson, a true Hollywood crime story that chronicles the life, career, and tragic death of an exploitation film maverick. Sehring and Drive-In-Sanity Films currently represents legendary drive-in movie producer Samuel M. Sherman and his library of films from Independent-International Pictures Corp. and Hemisphere Pictures.

This entry was posted in Comics, Kickstarter, TV and Movies. Bookmark the permalink.