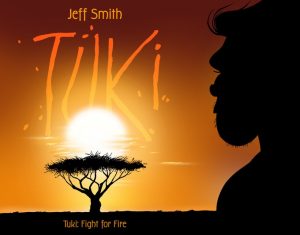 Key West, FL – May 3, 2021:  Jeff Smith’s third creator owned and self-published comics project, TUKI, is making its graphic novel debut on Kickstarter on May the 4th! TUKI, some may remember, was a short-lived online comic experiment in color, but now Smith has completely rebuilt the world of two million BCE into two full blown original black & white graphic novels set to ship this Summer and Fall. This Summer also marks the 30th anniversary of the first issue of BONE #1. 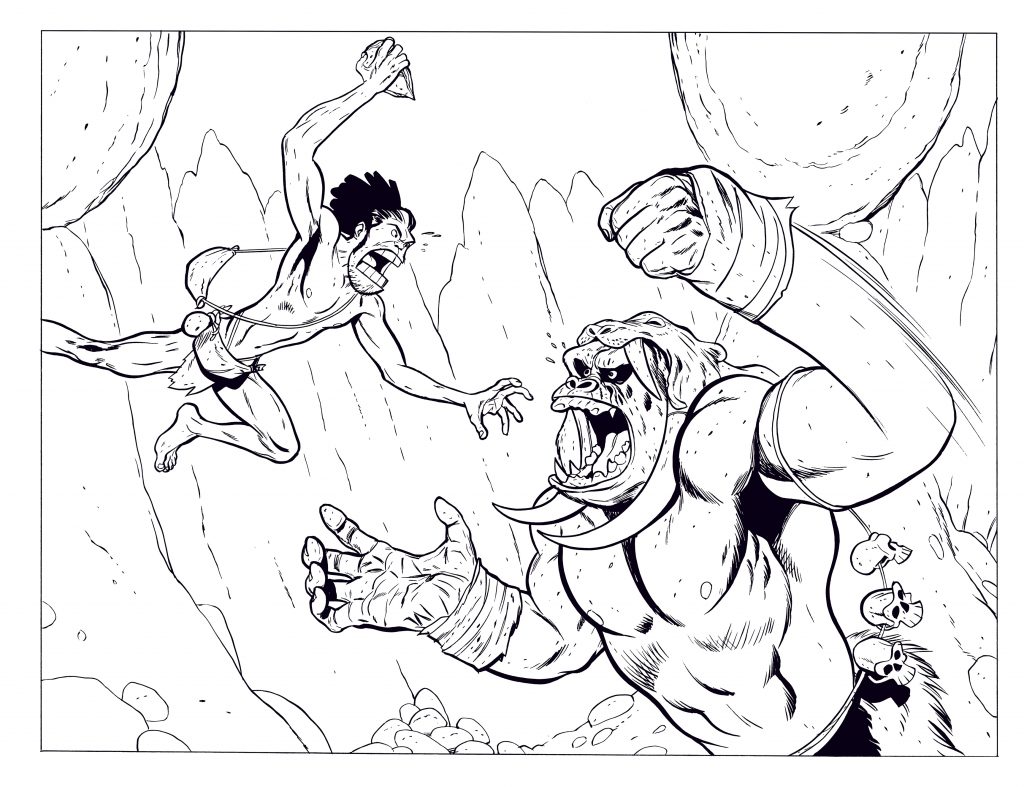 The story takes place at the dawn of the human race, and pits Tuki against a rival species of humans, the Habiline, who view the making of fire as a dangerous blasphemy and hunt those found using it.

“I’ve always been fascinated with human evolution, especially the point two million years ago when more than one species of human existed at the same time,” said cartoonist Smith, “this was also the moment we conquered fire. Definitely our best party trick!”

“I started to play around with TUKI before COVID hit,” he continued, “but once the lockdown happened, I decided to dive in and focus on straightening out the story. I ended up with enough material for two books! It was friends from the old self-publishing days, the Tucci’s and the Pulido’s, who turned my wife Vijaya on to Kickstarter and persuaded us to give it a go. If all goes well, this could be the beginning of a new series! Come check us out! We have rewards that are super high on the neat-o scale!”

Both volumes will be oversized and landscape formatted (11.375” x 8.875”) with approximately 144 pages each with a bonus material stretch goal. The return to black & white line art is in keeping with the initial runs of both BONE and RASL. The first book is 100% complete and ready to go to the printer.

About TUKI: At the dawn of humanity, during a period of tremendous change and drought, three lost children meet a mysterious traveler named Tuki. Together, their search for the Motherherd of all Buffalo leads them far north through the dangerous territory of a rival species called the Habiline. The Habiline hunt and kill anyone found using fire. Tuki’s reputation precedes them and soon they find themselves at the center of unwanted attention not only from Habiline warriors, but of gods and giants!

About Jeff Smith: Jeff Smith is the writer & artist of comics and graphic novels like BONE, RASL, SHAZAM: The Monster Society of Evil, ROSE and Tall Tales. Both BONE and RASL were self-published and are New York Times Bestsellers. BONE won 41 national and international awards including 10 Eisner Awards and 11 Harvey Awards, and has been translated into over 30 foreign languages. RASL won an Eisner for Best Graphic Novel. The short lived webcomic version of TUKI won the National Cartoonists Award for Best Online Comic in 2014.

This entry was posted in Comics, Kickstarter. Bookmark the permalink.