From an artistic standpoint Savage Dragon #252 should win so many awards in 2021. Erik Larsen and Ferran Delgado out did themselves.

PORTLAND, Ore. 10/02/2020 — The wildly popular homage to classic “funnies” comic strips—SAVAGE DRAGON #252 by Image partner and CFO Erik Larsen—is being rushed back to print to keep up with growing demand.

In this experimental issue, Larsen taps into the beloved comics nostalgia of classic Funnies strips with double-page spreads in the iconic newspaper comic strip style of storytelling. From a Peanuts parody to a Dick Tracy send-up, from a Doonesbury lampoon to a Blondie satire, this issue is sure to amaze and inspire.

“I’m happy to see how enthusiastically this issue was received by the fans. It was an enormous challenge to write and draw. It took considerably longer to put together than an ordinary issue of Savage Dragon and it’s extremely gratifying to have had it be so well received,” said Larsen. “I spent weeks combing through newspaper strips and making lists of what might work I drew strips which didn’t make the grade for one reason or another and had a lot of false starts along the way. Ferran Delgado, my letterer, hit it out of the park emulating the lettering of each strip. It was a tremendous effort but true labor of love for everybody involved.”

SAVAGE DRAGON #252 is also available for purchase across many digital platforms, including Amazon Kindle, Apple Books, comiXology, and Google Play. 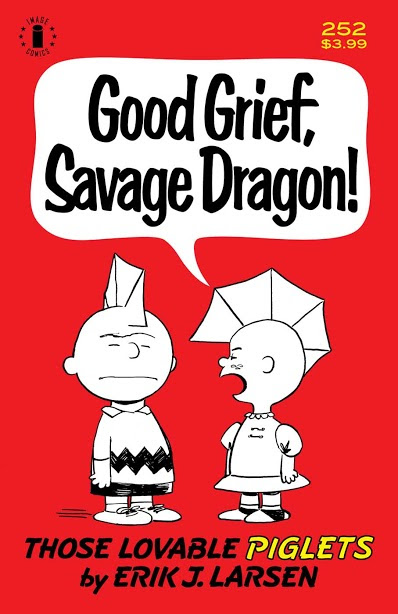