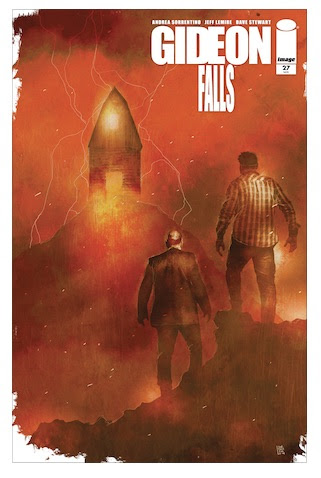 bestselling writer Jeff Lemire and artist Andrea Sorrentino (the creative team behind Green Arrow and Old Man Logan), with the talents of Eisner Award winning colorist Dave Stewart, will come to its show-stopping conclusion with an extra-length, shelf-busting issue #27. This final, mind-bending issue will clock in at 80 pages and release from Image Comics this December.

The horror/mystery series became an overnight success and critical darling when it launched in March 2018. It went on to take home the 2019 Eisner Award for Best New Series and become one of the top selling, reordered series at Image Comics with multiple reprints.

“We’ve been fortunate to publish a lot of great work by Jeff and his many collaborators—Descender, AD, Plutona, Royal City—but his work with Andrea on Gideon Falls is one of his most incredible storytelling accomplishments to date,” said Eric Stephenson, Publisher & Chief Creative Officer at Image Comics. “It’s a true pleasure to see talent of this level complete such an amazing series, not just in the way they intended, but with their most thrilling issue yet!”

Gideon Falls explores the lives of a reclusive young man obsessed with a conspiracy in the city’s trash, and a washed up Catholic Priest arriving in a small town full of dark secrets. At the heart of the town’s secrets is intertwined the mysterious legend of The Black Barn, a otherworldly building that is alleged to have appeared in both the city and the small town, throughout history, bringing death and madness in its wake.

Fans won’t want to miss the satisfaction of this finale. Gideon Falls #27 will be the final issue in the series and will be available at local comic book shops in December.

Gideon Falls is also available for purchase across many digital platforms, including Amazon Kindle, Apple Books, comiXology, and Google Play.

“Saturated with a horrific sense of anxiety.” —Entertainment Weekly

“Lemire and Sorrentino will go down as one of the greatest comic teams of all time.” —Brian Michael Bendis

“A dark, brooding piece of evocative horror.” —The Oregonian

“If you were a fan of Jeff Lemire and Andrea Sorrentino Green Arrow or Old Man Logan…then check out this original story.” —IGN

“Lemire really knocks it out of the park with this comic..” —Bleeding Cool

“[Lemire] doesn’t lose a step here nor does Sorrentino, who is composing here at peak level too.” —The Comics Beat

“There is nothing else like Gideon Falls on the stands today.” —HorrorDNA

“Some of the most beautifully haunting pages I’ve seen.” —Black Nerd Problems