Matt Kindt’s MIND MGMT is now a hit board game 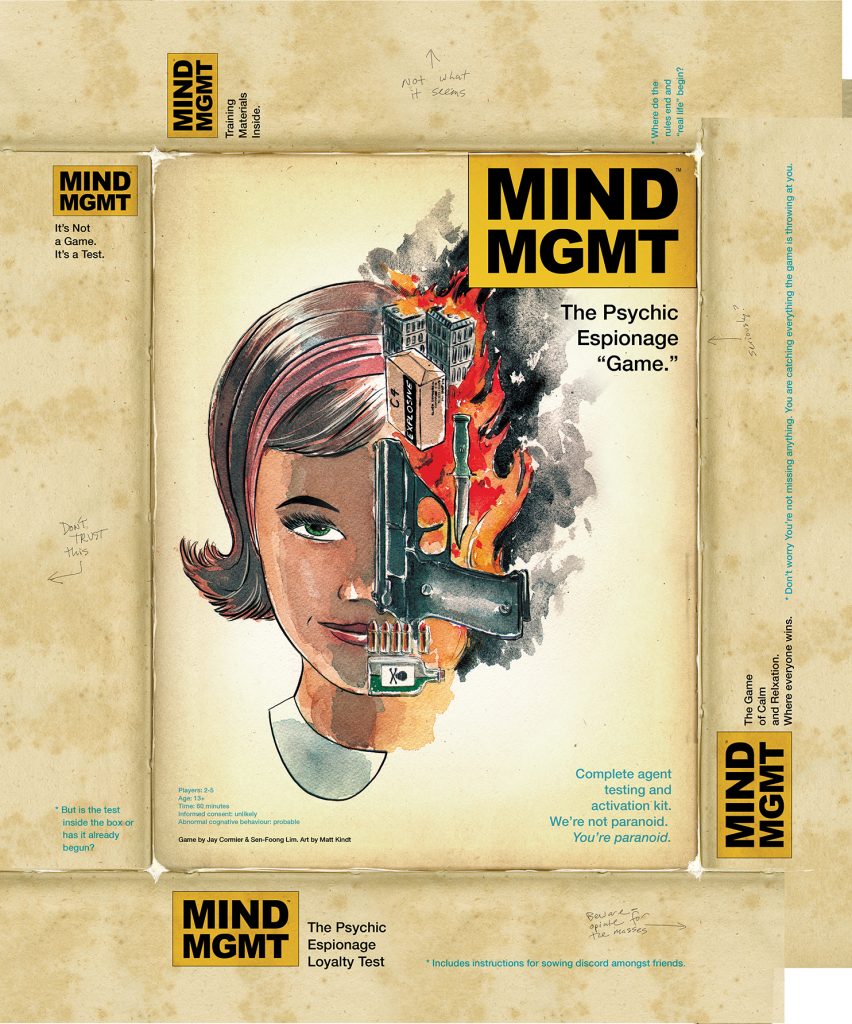 Vancouver, Canada: MIND MGMT: The Psychic Espionage “Game” is a tense, paranoia-fueled game of deduction and second-guessing from Off the Page Games. It’s based on the NY Times Best Selling series from Matt Kindt and is launching on Kickstarter March 3rd.

In this “one vs. many” game, players act as either a secret organization known as MIND MGMT (Mind Management) trying to find recruits and evade capture, or as rogue agents, determined to locate and take MIND MGMT down.

As Matt Kindt explains, “I was lucky enough to meet two talented, award-winning board game designers that weren’t just fans of MIND MGMT — they really got it. This isn’t just the definitive board game interpretation of the comics, it’s an interactive story-telling and training device. Proceed at your own risk.” Matt partnered up with Jay Cormier and Sen-Foong Lim, designers of Junk Art, Belfort and D&D: Rock Paper Wizard to make his world of espionage and paranoia come alive in a board game.

“We wanted to pack in as much deduction and teamwork as we could in a game that takes less than an hour to play ,” says Sen-Foog Lim, as these kinds of games usually take two or more hours to complete.

Fans of Matt Kindt and of the MIND MGMT comic series will be in for a real treat as the game will come with 80+ pages of new MIND MGMT stories — all written and illustrated by Matt Kindt. One mini-comic will come in each of the 10 sealed packages which are part of what Off the Page Games is calling the SHIFT System.

“We’re introducing the SHIFT System where at the end of each game, the side that loses gets to open a package which will give them more components, cards and rules to improve their chances the next time they play,” explains Jay Cormier, co-designer and also founder of Off the Page Games.

MIND MGMT: The Psychic Espionage “Game” is the first game being published from Off the Page Games, but it’s founder, Jay Cormier, has over a dozen published games including Akrotiri, Godfather: A New Don, In the Hall of the Mountain King, Draw Your Own Conclusions, and more.

This entry was posted in Books, Comics, Nerd Notes. Bookmark the permalink.