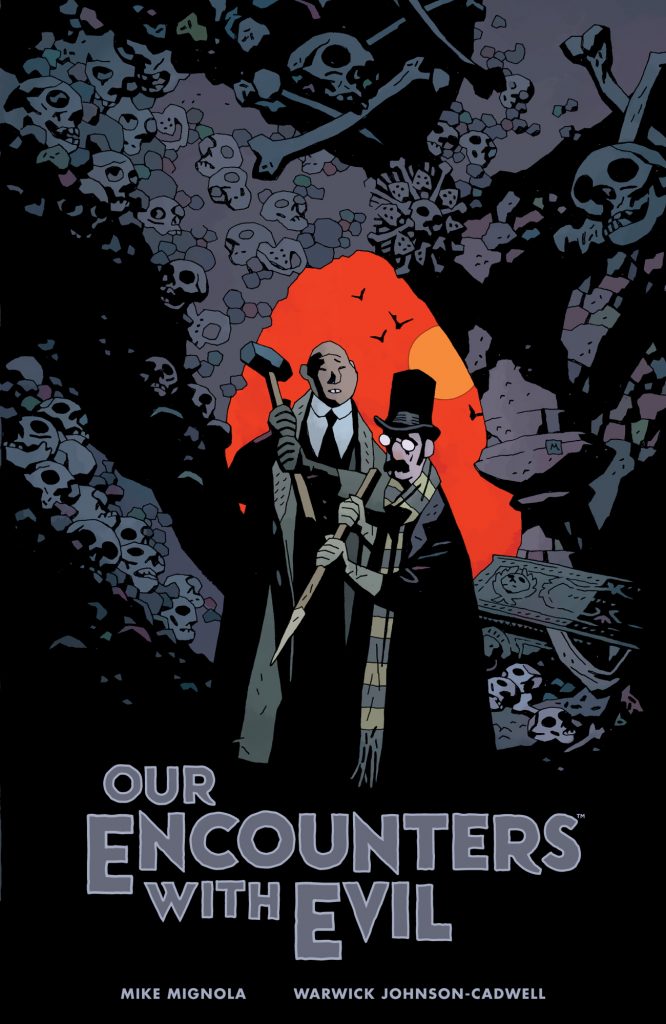 (November 12, 2019) Ahead of its publication, Dark Horse Comics is previewing the original graphic novel OUR ENCOUNTERS WITH EVIL: ADVENTURES OF PROFESSOR J.T. MEINHARDT AND HIS ASSISTANT MR. KNOX. The highly anticipated book is the sequel to the acclaimed graphic novel MR. HIGGINS COMES HOME created by legendary Hellboy creator Mike Mignola and Warwick Johnson-Cadwell. In this all new installment, Professor J.T. Meinhardt and Mr. Knox continue their pursuit of ne’er-do-well creatures of the night. Now, backed by the dauntless vampire hunter Ms. Mary Van Sloan, the heroes pursue vampires, werewolves, and other horrors that even they are hard-put to name or explain. The only thing that’s for certain? The strange truths these adventurers uncover are seldom what they seem. Dark Horse will publish the hardcover graphic novel―created by Mike Mignola and Warwick Johnson-Cadwell, with story and art by Warwick Johnson-Cadwell, lettering by Clem Robins and a cover by Mike Mignola with Eisner Award-winning colorist Dave Stewart―in comic shops on Wednesday, November 13th and in bookstores on November 26, 2019.

Like MR. HIGGINS COMES HOME, the new graphic novel is set outside the Hellboy Universe. “OUR ENCOUNTERS WITH EVIL recounts three adventures of our intrepid hunters as they battle evil in various supernatural forms, said Johnson-Cadwell. “The first of these, “The Lost Duke Kurtz,” is the possible discovery of a long-forgotten vampire menace and a tale of vampire vengeance. A typical not-so-typical night in the careers of Professor J. T. Meinhardt, Mr. Knox, and Ms. Mary Van Sloan.”

“Warwick brought an insane amount to energy and invention to MR.HIGGINS COMES home—more ideas than could ever fit into that one book, “ said Mignola , who scripted MR. HIGGINS COMES HOME which he created with Johnson-Cadwell. “So I was thrilled when he told me he wanted to continue the adventures of Meinhardt and Knox. You can look forward to a whole world of vampires and related monstrosities like nothing you’ve ever seen before.” 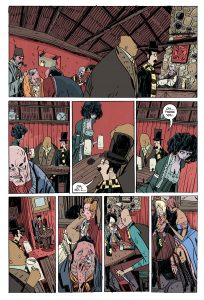 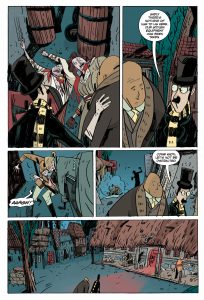 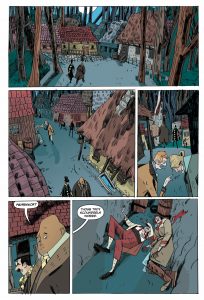 Here’s what the critics are saying about the book:

“OUR ENCOUNTERS WITH EVIL draws it inspiration from a wide range of influences, namely Arthur Conan Doyle, Bram Stocker, Hammer Studios fifties and early sixties heyday and The Fearless Vampire Killers, but even though it affectionately wears all of its forbears on its blood soaked sleeves, it’s also an incredibly original, vibrant, whimsical and at times, comedic take on a much loved horror staple.”—MASS MOVEMENT

“A grand new graphic novel…. with a triple treat of supernatural stories.”—COMICON.COM

“An endlessly clever and surprisingly hilarious horror graphic novel. Mignola and Johnson-Cadwell have created a story that derives influence from literature and mythic monsters of old, and still stands on its own as a unique creation. Any fan of Gothic horror, classic monsters or even just witty humor are in for a definite treat.”—MONSTERS FIGHTING ROBOTS