SOMETHING IS KILLING THE CHILDREN 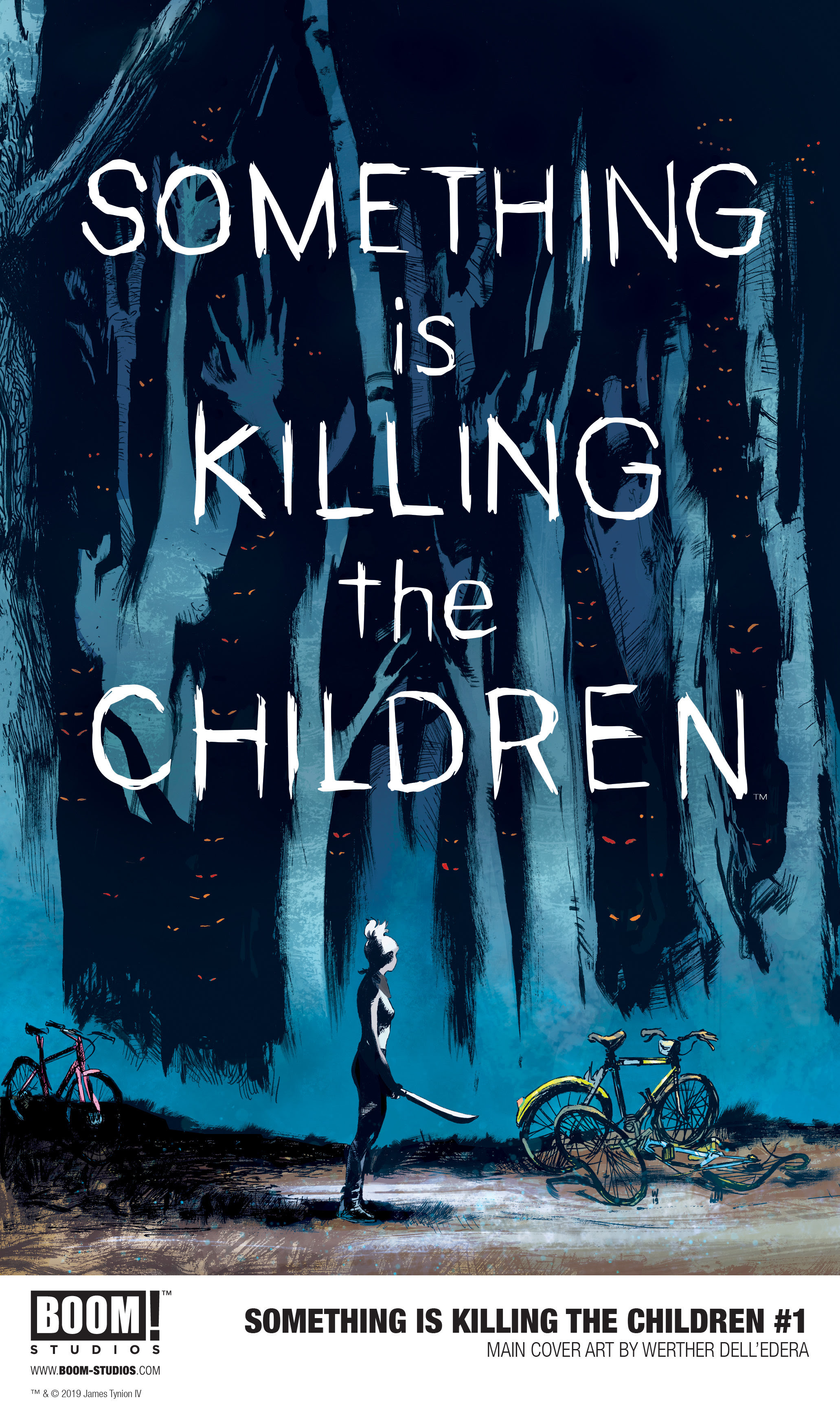 In a sleepy town in the heart of America, children have started to die in horrific ways. The local police are mystified by the brutal murders, and frantic to catch the killer. But they refuse to believe reports of impossible creatures that lurk in the shadows snatching children and tearing them to pieces, especially since the only people who claim to have seen these so-called monsters are other children. Enter Erica Slaughter, a mysterious stranger who rides into town and claims she can solve their “monster” problem. But can the townspeople trust this dangerous outsider with their children’s lives? And more importantly, can the children trust this strange adult with their secrets?

James Tynion IV is a comic book writer, best known for his work on the Batmanfranchise for DC Comics. His comics career began with co-writing the back-up stories on Scott Snyder and Greg Capullo’s character-defining run on Batman, which would lead to him making his own name on a number of Bat-centric series. This work would culminate in James serving as the showrunner of two consecutive weekly comic series, Batman Eternal and Batman & Robin Eternal, followed by writing the massive crossover project Batman / Teenage Mutant Ninja Turtles and subsequently taking the reins of one of DC’s crown jewels, Detective Comics. In addition to the 2017 GLAAD Media Award-winning series The Woods with Michael Dialynas, James has also penned the critical successes Memetic, Cognetic, andEugenic with Eryk Donovan, The Backstagers with Rian Sygh, and Ufology with Noah J. Yuenkel and Matthew Fox. An alumni of Sarah Lawrence College, Tynion now lives and works in New York, NY.

“SOMETHING IS KILLING THE CHILDREN is a project that has been living in my head for a long, long time. It’s shifted and changed in different ways at different moments, but ultimately I think this was the form it was always MEANT to take. There are horrifying things in the world that are only really visible to the young—unique societal pressures and terrors, monsters, unshaped creatures of fear and horror that prey on children—and much as we try to protect them, we fail, over and over again.” said writer, James Tynion IV. “This is a very grounded human story about very grounded human fears that take a more literal, horrifying shape. And then there’s Erica Slaughter. She kills the monsters the other adults can’t see. I am very excited for all of you to enter the world Werther and I have created, so you can meet her.”

Werther Dell’Edera is an Italian artist, born in the south of Italy. He has worked for the biggest publishers in both Italy and the U.S., with his works ranging fromLoveless with Vertigo to the graphic novel Spider-man: Family Business with Marvel Entertainment. He has also worked for publishers such as Image Comics, IDW, Dynamite, and Dark Horse. In Italy, he has drawn Sergio Bonelli’s Dylan Dog andThe Crow: Memento Mori, from IDW and Edizioni BD, for which he has won awards for Best Cover Artist, Best Series, and Best Artist.

“I was very excited when BOOM! Studios got in touch with me regarding this project with James Tynion IV. This is my first creator-owned project, and everything so far has been amazing.” said artist, Werther Dell’Edera. “To draw a character like Erica Slaughter has been an absolute pleasure.”

“SOMETHING IS KILLING THE CHILDREN takes a deep dive into humanity’s darkest moments and primal fears, while introducing us to an intriguing new breed of monster hunter,” said Eric Harburn, Senior Editor, BOOM! Studios. “This series is unlike anything else on the shelves — an atmospheric, subversive, and mature exploration of trauma that is a bold next step for both James and Werther.”

Print copies of SOMETHING IS KILLING THE CHILDREN will be available for sale September 4, 2019 exclusively at local comic book shops (usecomicshoplocator.com to find the nearest one) or at the BOOM! Studios webstore. Digital copies can be purchased from content providers, including comiXology, iBooks, Google Play, and the BOOM! Studios app.

For more on SOMETHING IS KILLING THE CHILDREN and other projects fromBOOM! Studios, stay tuned to www.boom-studios.com and follow @boomstudios on Twitter. 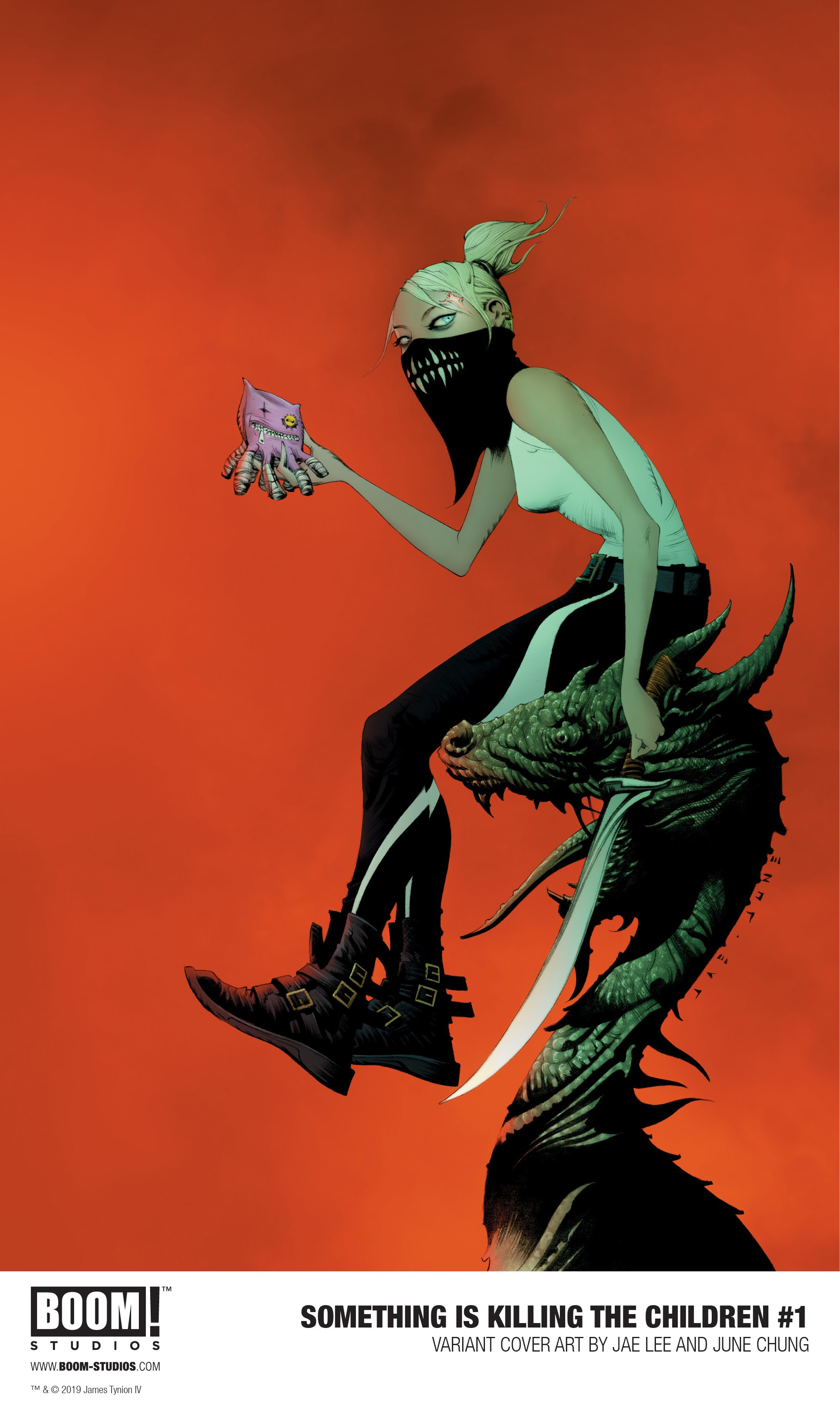 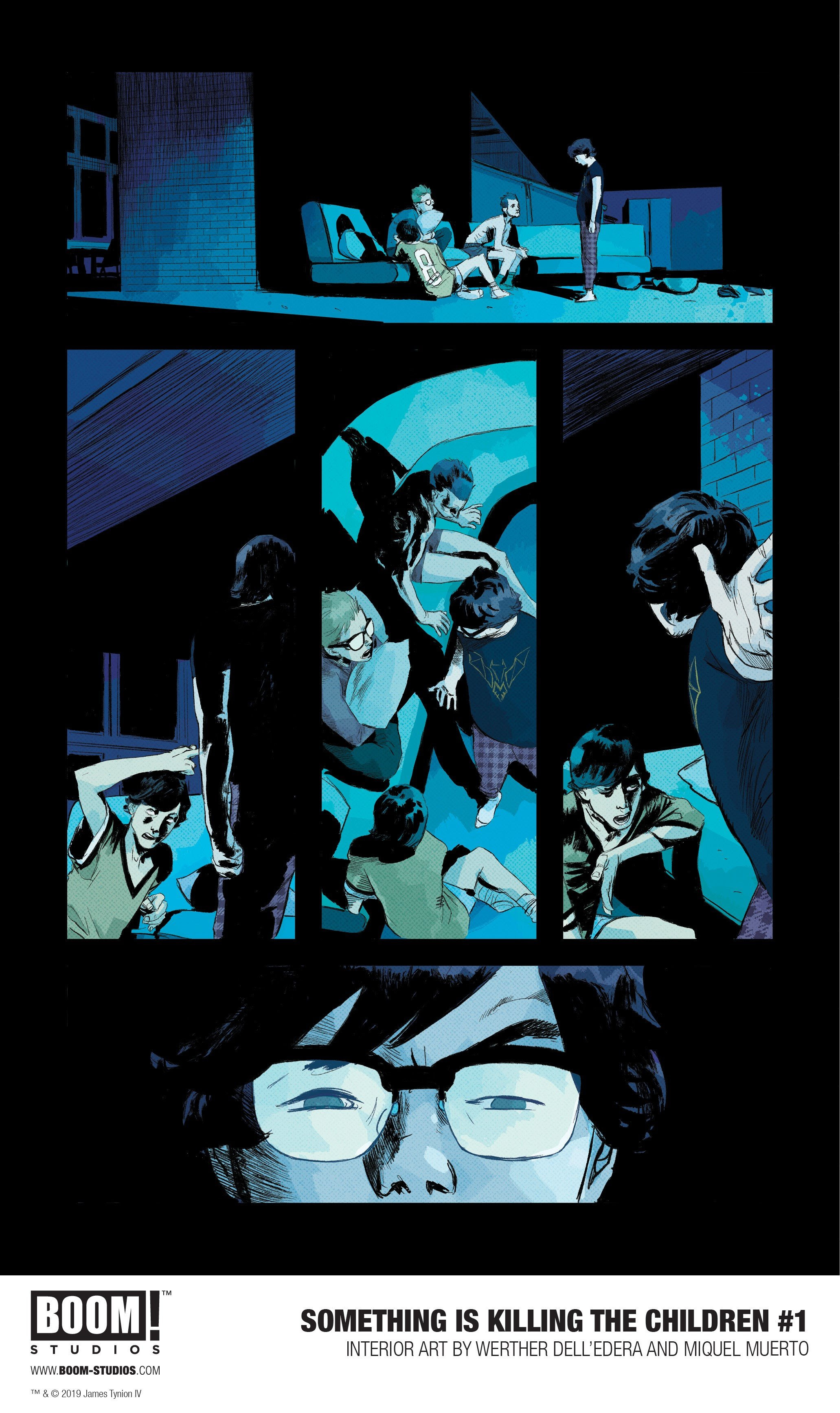 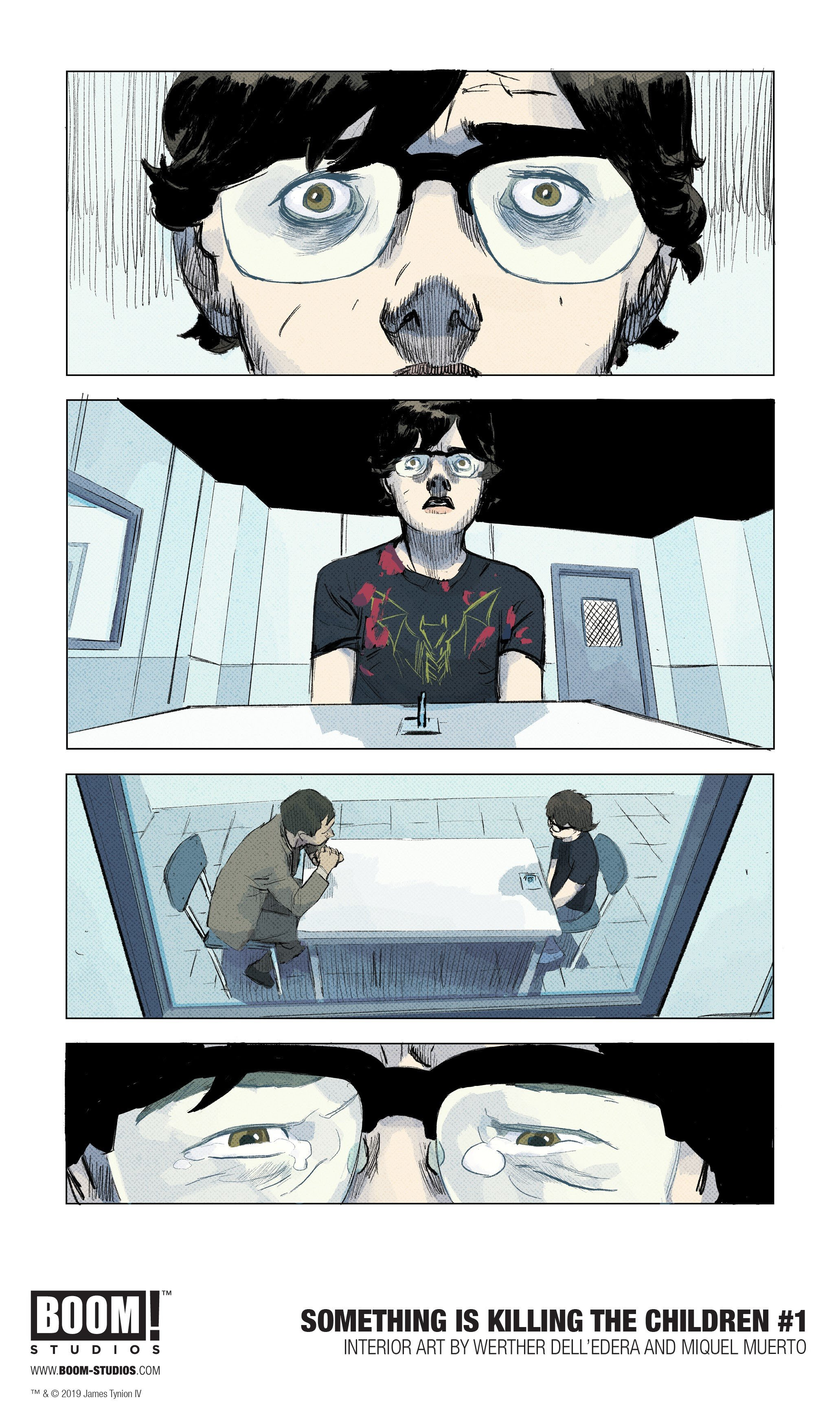 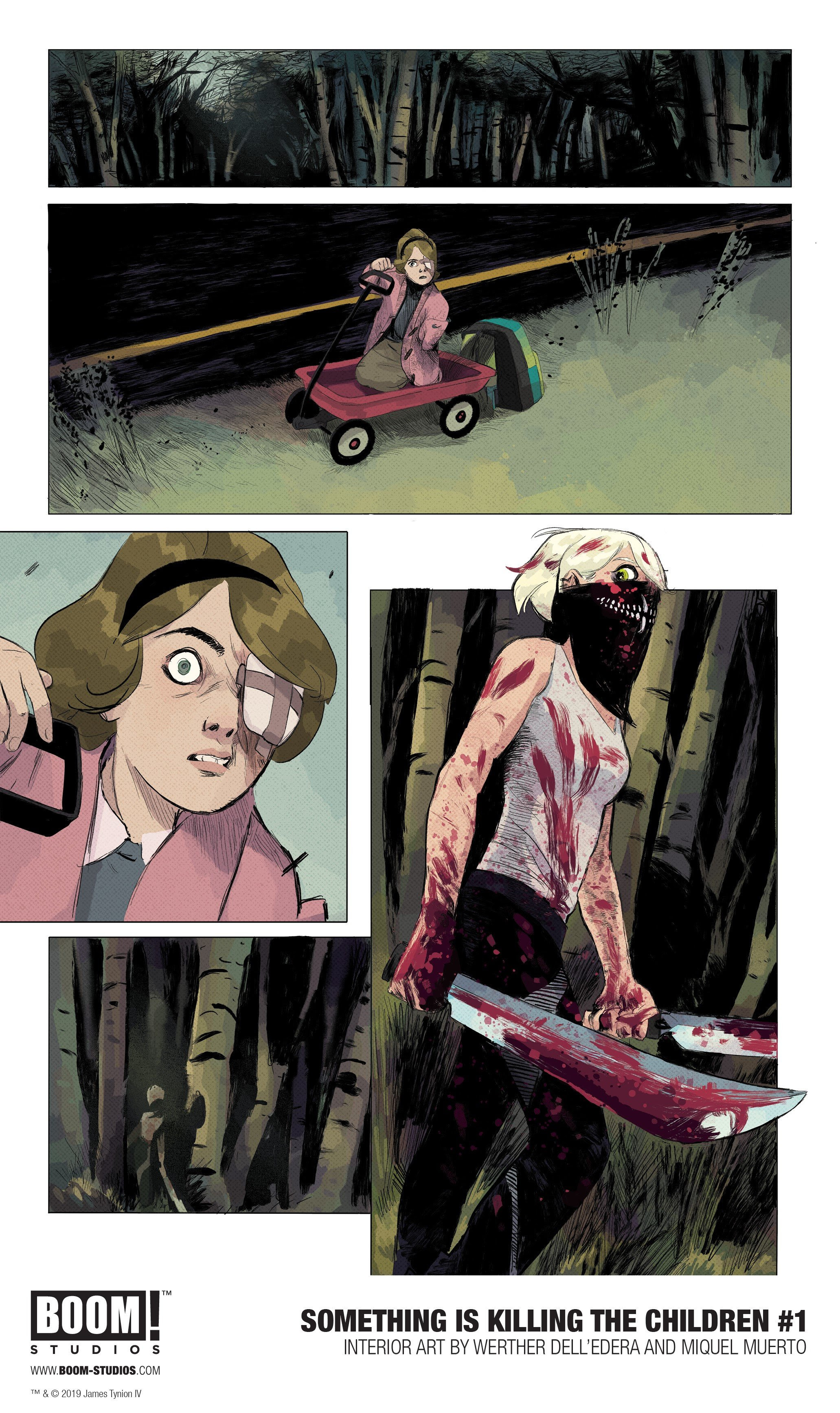