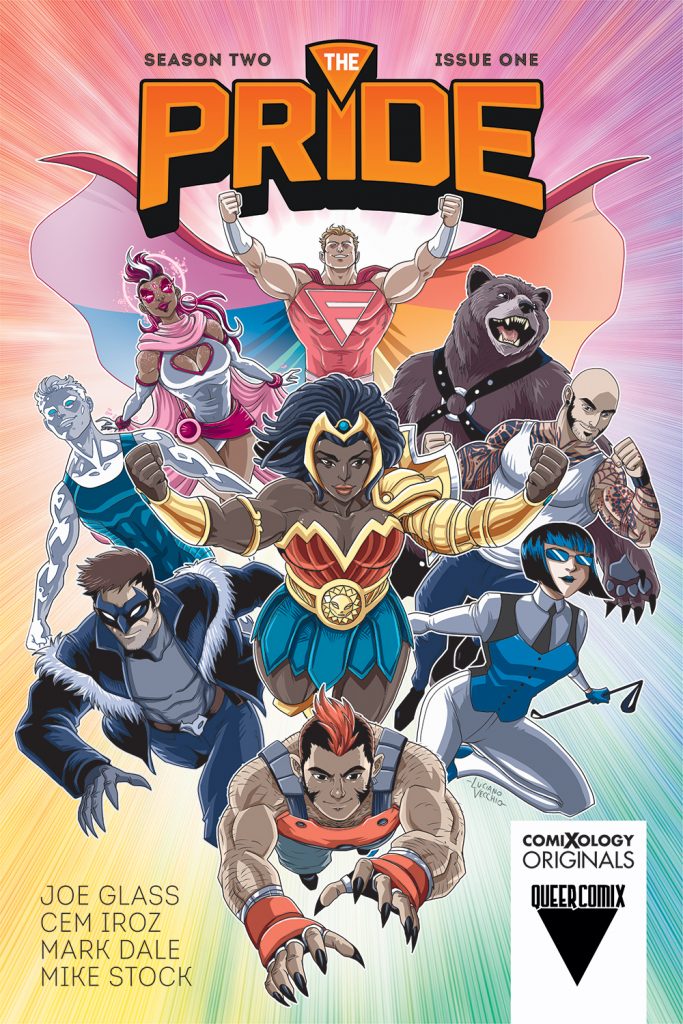 All of The Pride will be available in print via Amazon.com upon release of The Pride Season Two collected edition

In The Pride Season Two you’ll join an amazing cast of heroes who united to form a team comprised entirely of LGBTQ+ crime fighters in bright and fun action-packed adventures that any super hero fan can enjoy. The team returns with exciting new adventures where they must stop a nuclear meltdown, welcome new heroes, and investigate a spate of mysterious attacks on the world’s biggest pop star.

“I began The Pride because I want to tell stories where queer characters and stories are not only told through metaphor, analogy and subtext, but are open, accessible and show a diversity of life not usually seen in the medium,” says writer Joe Glass.

“We’ve been big fans of The Pride since it debuted through comiXology Submit in 2014,” said Chip Mosher, comiXology’s Head of Content. “We are excited about the future of The Pride and so have taken steps to invest in it and have it continue as a comiXology Originals title. It’s fantastic to be able to pick up a series that debuted on Submit and help extend its reach to a broader worldwide audience.”

In a world populated by people with superpowers, FabMan (Tomorrow’s Fabulous Man, Today) feels a deep schism in the representation of his community and his own heroic exploits, which are often presented as fluff pieces in the news. Wanting to fight for change, he forms The Pride, the world’s premier LGBTQ+ supergroup – featuring a diverse range of characters representative of the broad LGBTQ+ spectrum, from gay, lesbian, bi and trans superheroes to non-binary, drag queen, HIV+, children of gay parents, and more. Together they fight to protect the world from prejudice, misrepresentation, and injustice, not to mention a pesky supervillain or two!

The Pride was one of the best-selling comiXology Submit releases of 2014, garnering acclaim from noted comic book writers:

“I highly recommend this smart, charming, wonderful book to anyone who likes good comics. It’s absolutely a pleasure to read and a clear labor of love.” – Gail Simone, Batgirl, Leaving Megalopolis, Clean Room

Joe Glass is a comics writer and creator of LGBTQ+ superhero series, The Pride. Joe has been a critic and reporter on comics and the industry, while making his own comics and fighting for accessibility and representation for the LGBTQ+ community in comics. Joe lives in the valleys of South Wales, UK.

ComiXology, an Amazon.com, Inc. subsidiary (NASDAQ:AMZN), is a revolutionary, cloud-based digital comics service. With content from over 125 publishers as well as thousands of independent creators from around the world, comiXology provides an unrivaled library of comic books, graphic novels, manga and bandes dessinées. The company’s first-in-class innovations include the exclusive Guided View technology which provides an immersive and cinematic reading experience and a new monthly subscription service. ComiXology is based in New York City, with operations in Seattle and Los Angeles. For more information, visit comixology.com and follow the company on Twitter, Facebook and Tumblr.