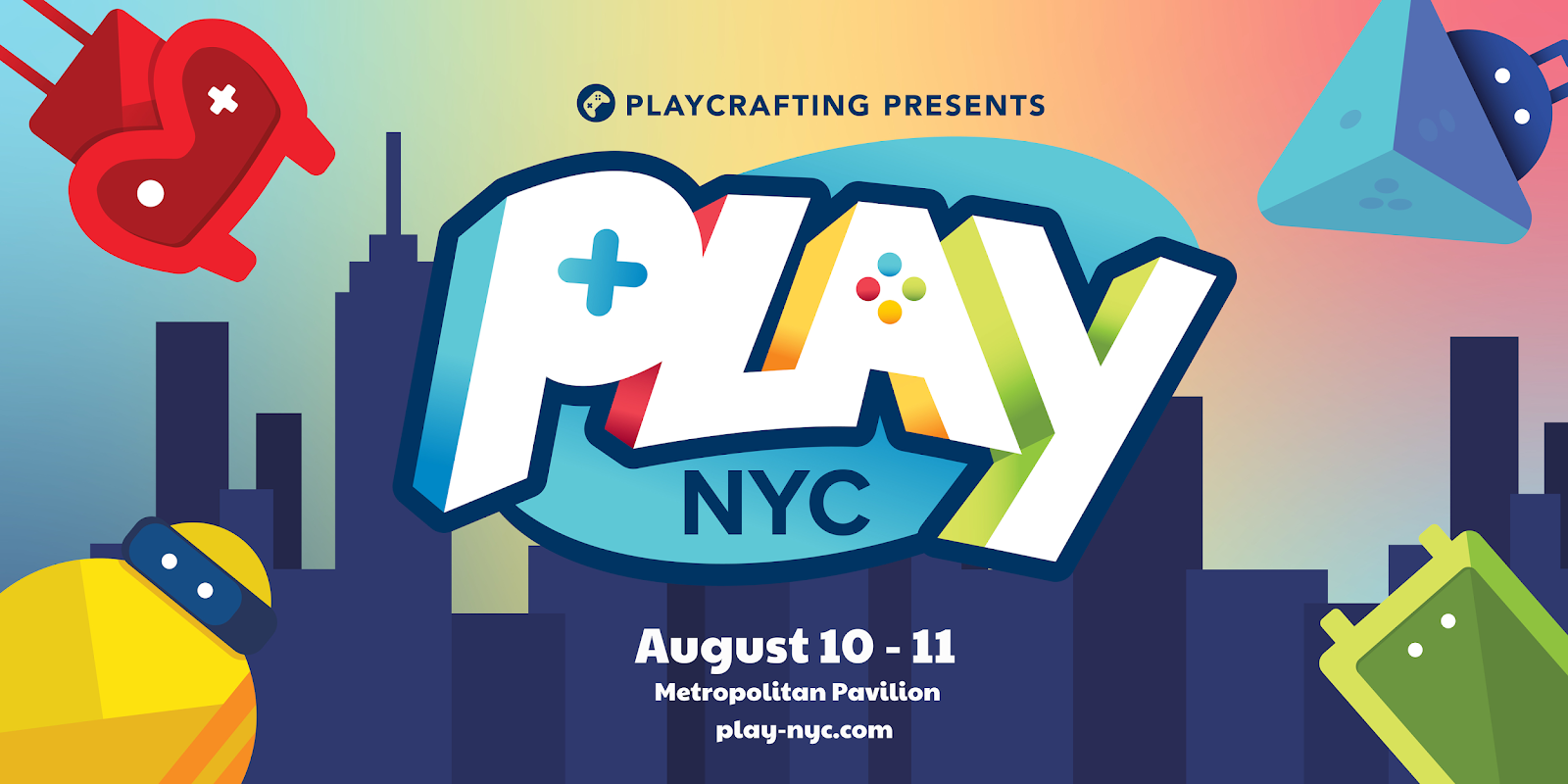 NEW YORK,  (May 7, 2019) – Playcrafting announced today it’s bringing the 3rd annual Play NYC  – the biggest, two-day game convention in New York – back to the Big Apple in a new home – the Metropolitan Pavilion (125 W 18th Street) – designed to harness, elevate and celebrate the true essence and impact of the U.S. gaming community on August 10th and 11th. Visit play-nyc.com for more detials. Tickets are now on sale here. Apply here to become an exhibitor. Click here to request press passes.

“In 2017, we gave NYC its first dedicated game convention. In year two, we took everything to the next level, doubling the number of exhibitors and games, expanding our live stream with the biggest names in the industry, and more,” said Dan Butchko, Founder and CEO of Playcrafting and the convention organizer. “Gaming keeps growing in the U.S. because of its talented community of creators and fans. This year, we’re going back to our roots, ensuring everything about Play NYC – from the look of the show to its hundreds of playable booths – reflects, celebrates and creates opportunities for creators and fans to unite through the power of games.”

This year, gamers and enthusiasts of all ages, backgrounds and interests will experience a weekend-long event that will pack Metropolitan Pavilion with games of all kinds, interactive installations created just for Play NYC, game debuts from some of the most established and rising studios, and much more.

Among this year’s many features will be the exclusive, traveling Bose AR-cade, which will reveal the latest set of games created by select, New York-based developers during the second “Bose AR Game Jam” that will take place June 28-30, 2019. The heads up, hands free audio AR games will be built on the Bose AR platform. The Bose AR-cade is part of a year-long alliance between Bose and Playcrafting to give developers from across the U.S. access to the latest Bose AR-enabled wearables and developer tools so they can bring innovative experiences to thousands of game players and Bose AR users.

“Playcrafting grew from 10 developers who got together to show each other their games in 2009 to one of the largest game communities in the U.S. that look forward to our 200+ conventions and classes for chances to show and fine-tune their work,” said Butchko. “Part of the way we create opportunities for the community to grow and thrive is by teaming up with other organizations committed to the same cause. Bose is a tremendous ally, and we’re excited to work with them and others to bring even more unique experiences to NYC developers and gamers alike.”

Play NYC will run on Saturday, August 10th and Sunday, August 11th from 10 a.m. – 6 p.m. ET. Tickets start at $25.00 per person. Visit play-nyc.com and follow us on Twitter @Playcrafting and #PlayNYC for more updates.

Playcrafting is the largest network of game developers in New York. Started as a small Meetup group in 2009, the organization has grown to 30,000 strong across the U.S. From design and programming to business and beyond, developers come to Playcrafting to sharpen their skills and partner with companies that help them succeed. The organization’s hands-on classes lower the barrier for entry for anyone to get started making games and to empower pros to level up their skills. Playcrafting hosts everything from local gatherings like Expos and Demo and Plays to industry-recognized annual events like Play NYC and the largest Global Game Jam site in the U.S. The organization offers over 100 courses and events annually. Partnerships like Bose unlock the power of game creators and generate brand new games that weren’t otherwise possible. Previous partners include Facebook, Verizon, IBM and more. Visit here to sign up and join us.