Today (April 23) is the day according to records that Shakespeare passed away, it is also St. George’s Day, opening day of Wrigley Field, the debut of New Coke, the birthdate of Shirley Temple Black, Lee Majors, Sandra Dee, Roy Orbison, John Cena, John Olliver, Kal Penn (the last three the same year). It is also recognized as World Book Day.

To that, it is also the date that Quirk Books has chosen in 2019 to release its new Shakespeare Pop! Series by the noted author of the publisher’s previous William Shakespeare’s Star Wars series, Ian Doescher.

To start this series, Ian tackled two of this writer’s most beloved films. One a perfect comedy from modern comedy legend Tina Fey, the other a very flawed yet brilliant comedic drama from the combined minds of directors and screenwriters Bob Gale and Robert Zemekis. In both adaptations Doescher worked very hard to maintain the language and style of Shakespeare while not losing the pivotal moments, lines, and references of the modern films. 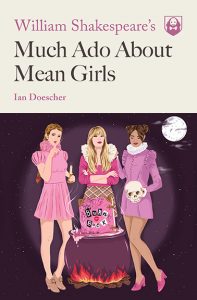 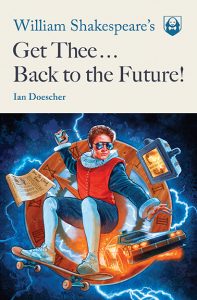 Much Ado About Mean Girls doesn’t forget that on Wednesdays we wear pink. Nor does it forget that Cady narrates much of the film and that transitions in it are mid scene at times. Ian finds his ways around that using the same tricks Shakespeare would have had to use himself and does this masterfully. Mean Girls came out originally at a time where I was at a period shortly out of college, but close to true adulthood to truly relate to both Cady’s story of finding herself and Mrs. Norbury’s travails as being a newly single adult still young and trying to enjoy life.

My favorite scene in Mean Girls is truly the trust falls and Ian staying true to style still captures this many layered character scene perfectly evoking the fantastic film while also dutifully educating a reader on Shakespeare’s style.

Get Thee…Back to the Future tackles a much more deft subject and has to rely on much more adaptation to translate the complicated film into something that would work as a Shakespeare stage play. Luckily Ian is a truly capable writer. While some purists on the all ends would find flaws with this, they are no worse than the flaws one finds in the original film. There are certain flourishes Mr. Doescher does that really make me smile. Such as translating Einstein’s woofs, or a couple of Marty’s monologues being exactly 88 lines long.

One of my personal biggest issues with Back to the Future has always been the consequences of time travel and how if one changed something in the past that changed the future, then possibly they never went back in time to begin with because the future changed in such a way to not have them go back, and therefore… what? Ian Doescher doesn’t go AS FAR into the complication as I always will, but a short bit of dialogue between two policemen never in the film questions a portent of this in a meta way that I think would satisfy any viewer of a play of this ilk had it existed in Shakepeare’s time.

Be a fan of Shakespeare, either of these films, Ian’s previous Star Wars books or completely unfamiliar to all of it and seeking something new an interesting I highly recommend both these QUIRK productions. They are also both wonderfully designed by Doogie Howser and have illustrations by Kent Barton throughout.

They are available NOW, (April 23, 2019) in paperbook and e-book in all the places you get books.