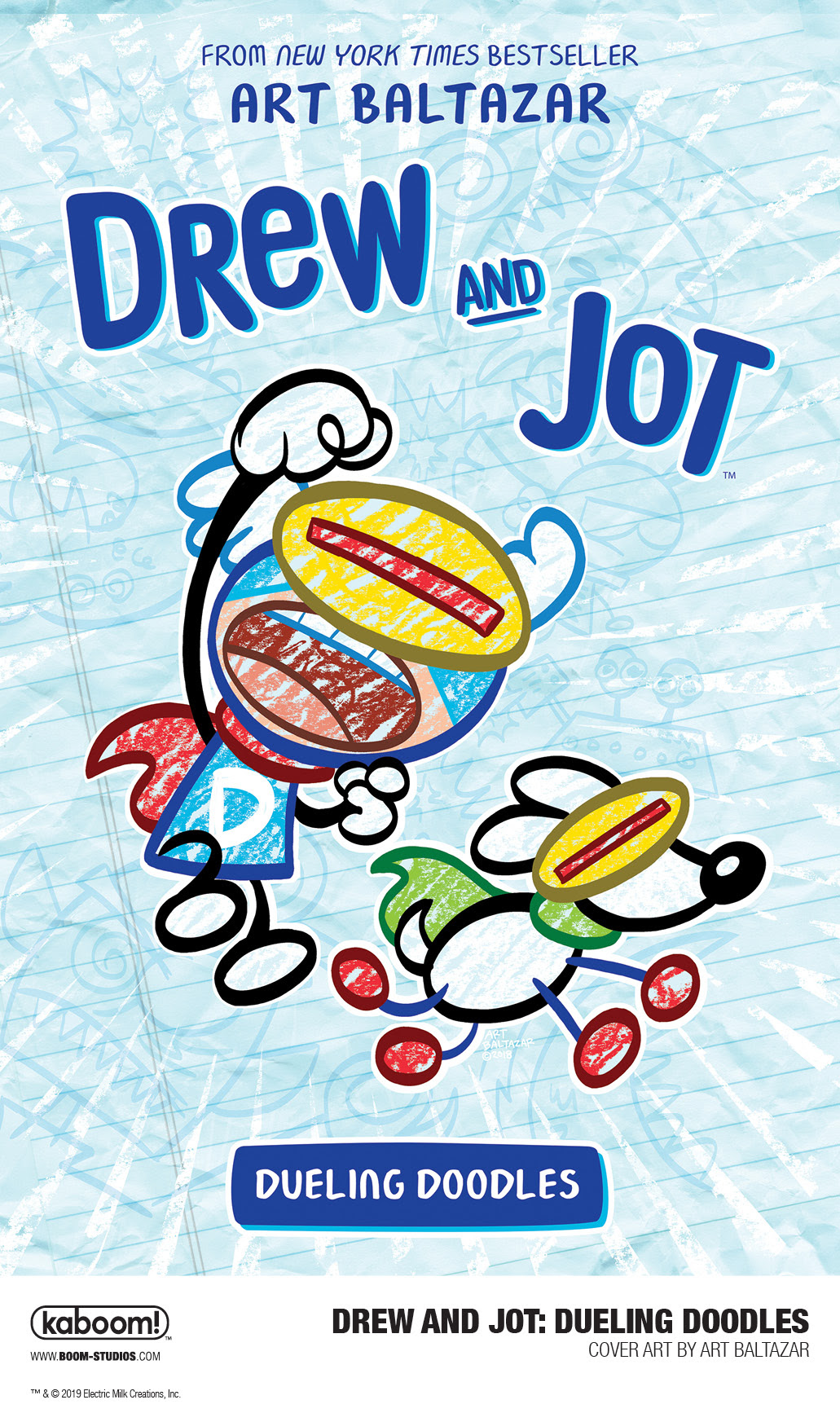 In DREW AND JOT: DUELING DOODLES, Andrew and Foz become best friends on the first day of fifth grade through their mutual love of drawing fun characters and crazy action. Their sketches practically come to life in their notebooks where they draw the amazing adventures of the flying superhero Drew, his canine sidekick Jot, and the diabolical villain Doctor Danger. It’s a world of two best friends using their art to go on fun adventures and save the day – that is, until Andrew’s little sister gets her hands on his notebook and scribbles a brand new threat that could ruin everything!

Art Baltazar is an award-winning cartoonist from Chicago, IL. He has been creating comics ever since he can recall, self-publishing in 1994 with titles such as The Cray-Baby Adventures and the famous Patrick the Wolf Boy. Baltazar is a creative force behind the New York Times bestselling and Eisner Award and Harvey Award-winning Tiny Titans, as well as the artist of the beloved DC Super-Pets children’s book series! He co-wrote DC Comics’ Billy Batson and the Magic of Shazam, Young Justice, Green Lantern Animated(comic) and is the artist and co-writer for Superman Family Adventures, Super Powers, and the new Superman of Smallville graphic novel from DC Comics, as well as the Itty Bitty Hellboy series. Baltazar is co-founder of the AW YEAH COMICS comic shop and co-creator of the AW YEAH COMICS comic book series starring Action Cat and Adventure Bug.

“The looseness and fast energy of crayon sketches gone wild! DREW AND JOT are characters I had in my sketchbook since the year 2002!” said writer and artist, Art Baltazar. “This is an EVENT come true for me and it feels excellent to FINALLY bring these guys to the masses! AW YEAH BOOM! Let the dueling of doodles begin! Enjoy the awesome!”

DREW AND JOT: DUELING DOODLES is the latest release from BOOM! Studios’ award-winning KaBOOM! imprint, home to comics for middle grade and younger readers including licensed series such as Adventure Time, Steven Universe, Regular Show, Ben 10, and Over The Garden Wall, along with original series like Just Beyond: The Scare School by R.L. Stine and Kelly & Nichole Matthews, Hex Vet by Sam Davies, RuinWorldby Derek Laufman, and Pandora’s Legacy by Kara Leopard, Kelly & Nichole Matthews.

“This book is for every kid, from ages nine to ninety, who ever dressed up in a superhero cape or spent a week stapling together copies of their own hand-drawn comic book adventure,” said Chris Rosa, Editor, BOOM! Studios. “Art Baltazar brings all his trademark humor, fun, and zany action to this superhero caper that’s bound to please comic book fans of all ages, and maybe even convince some of them to start drawing their own.”

Print copies of DREW AND JOT: DUELING DOODLES will be available for sale in November 2019 at local comic book shops  (use comicshoplocator.com to find the nearest one), bookstores and the BOOM! Studios webstore. Digital copies can be purchased from content providers, including comiXology, iBooks, Google Play, and the BOOM! Studios app.

For continuing news on DREW AND JOT original graphic novels and more from BOOM! Studios, stay tuned to to www.boom-studios.com and follow @boomstudios on Twitter. 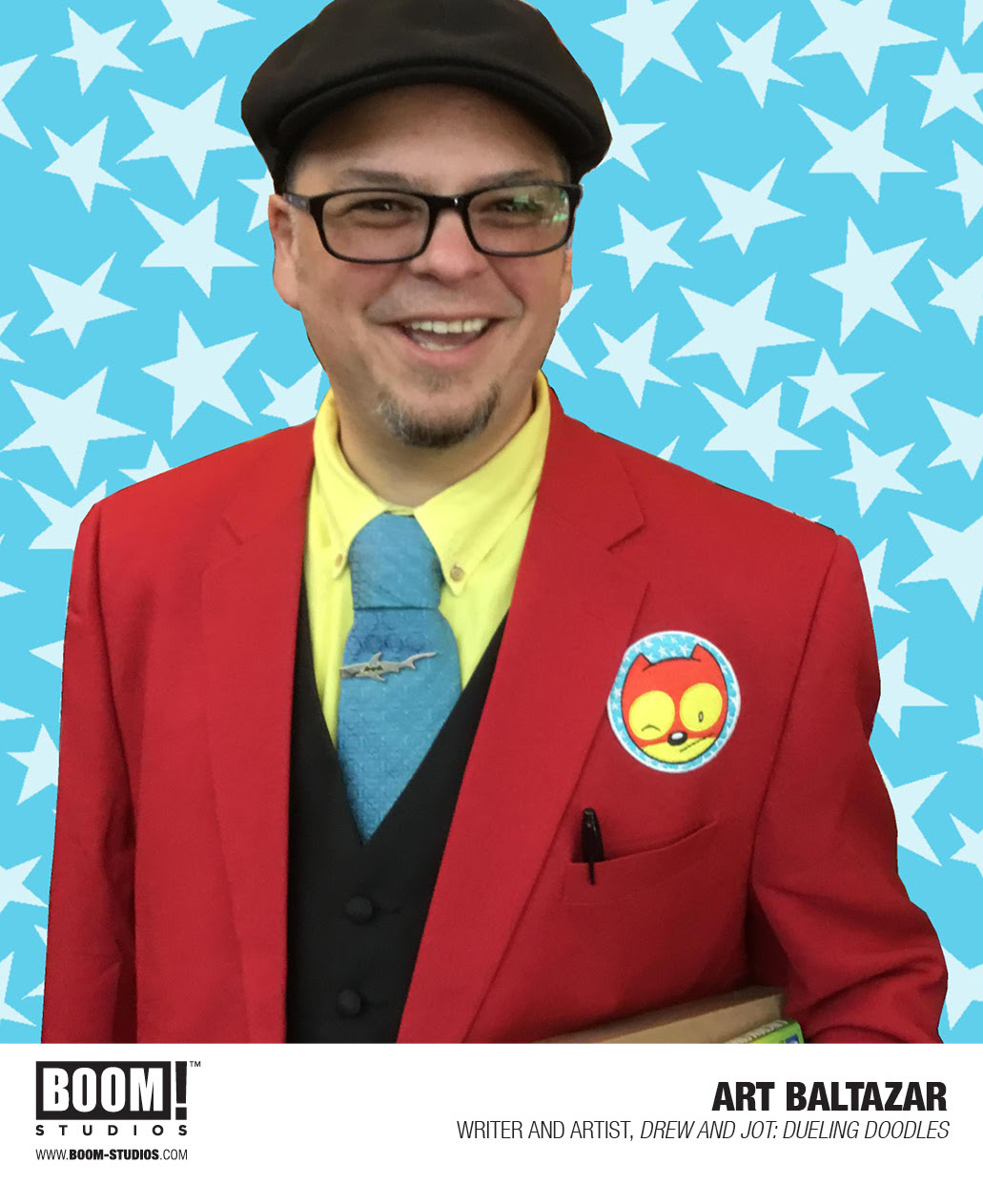 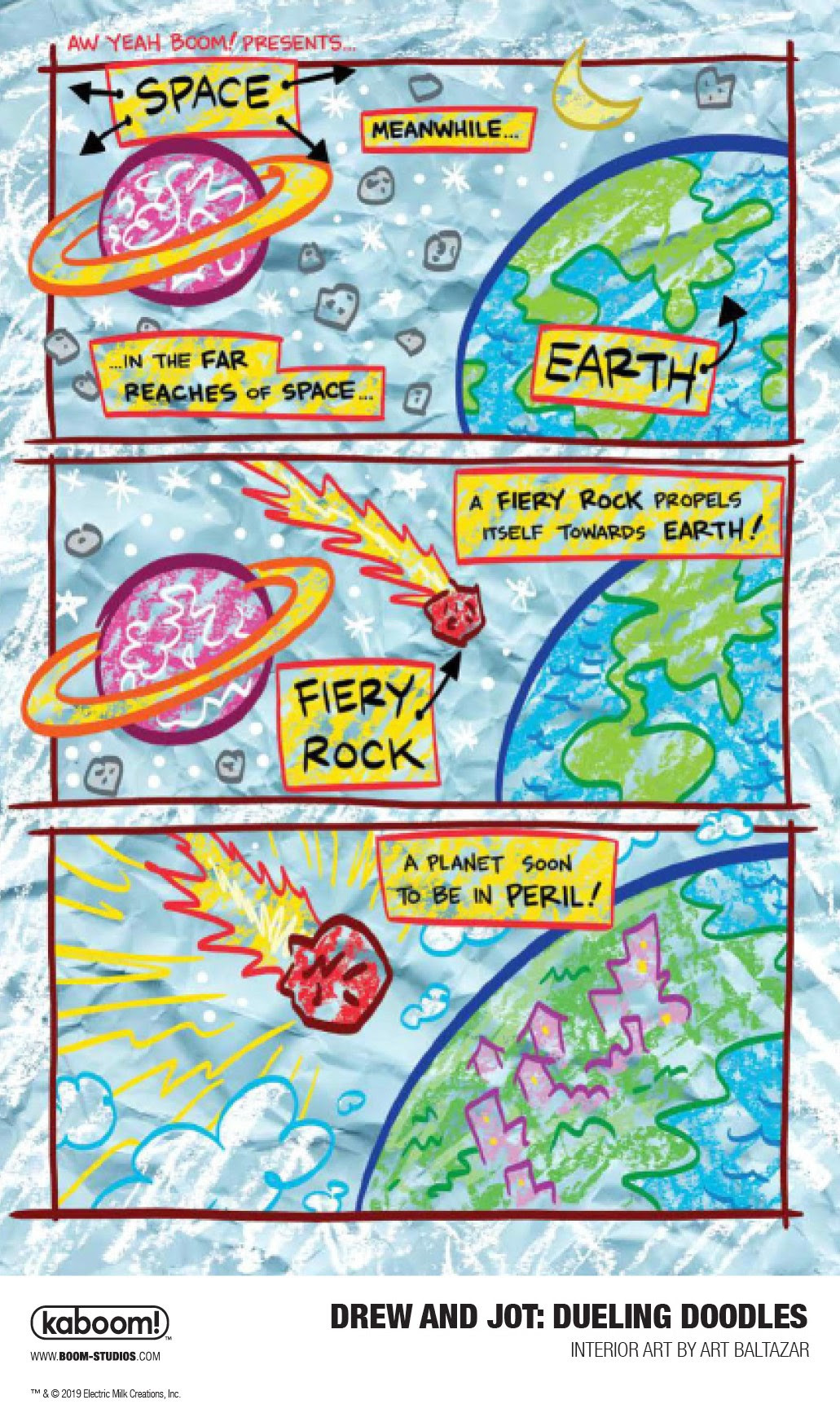 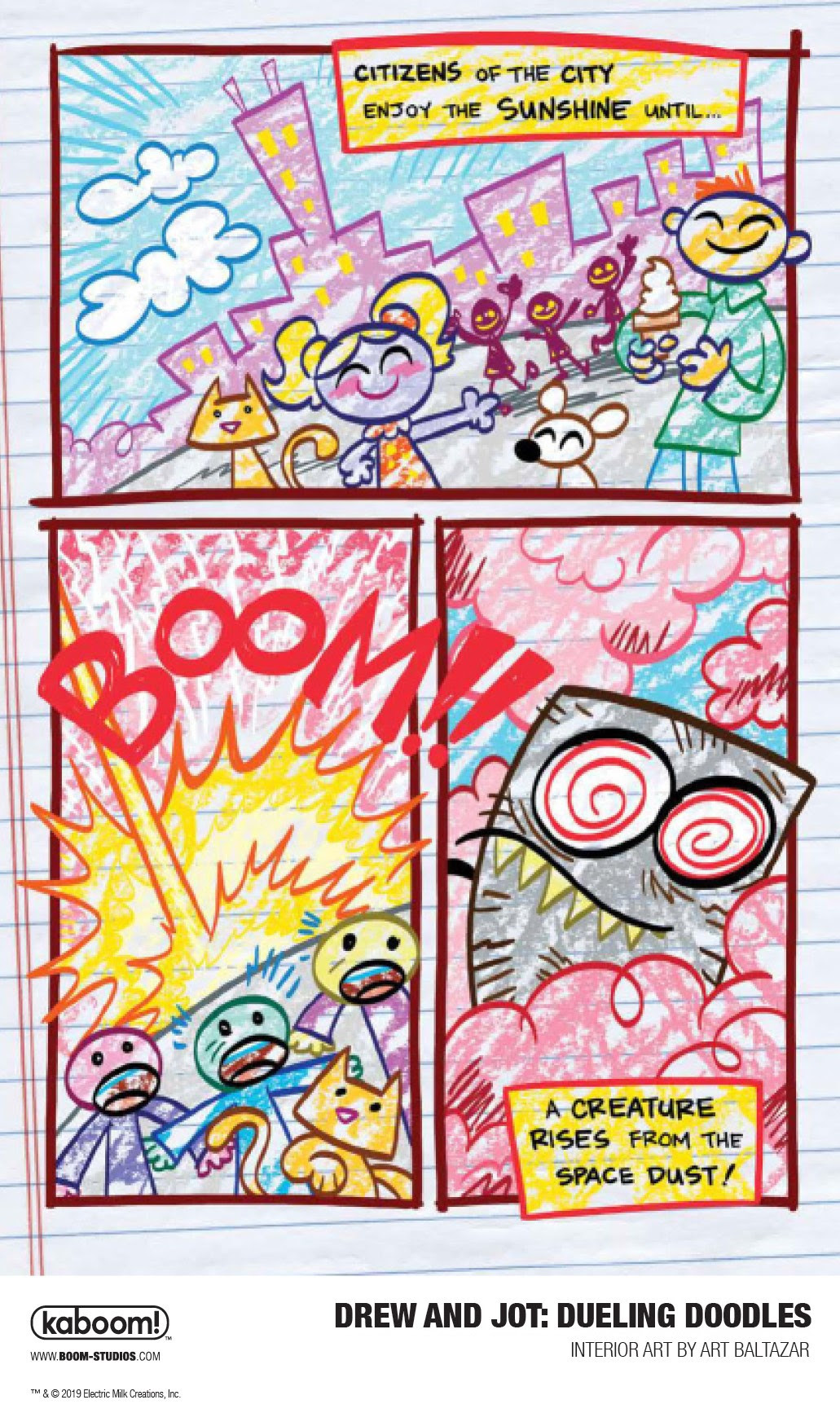 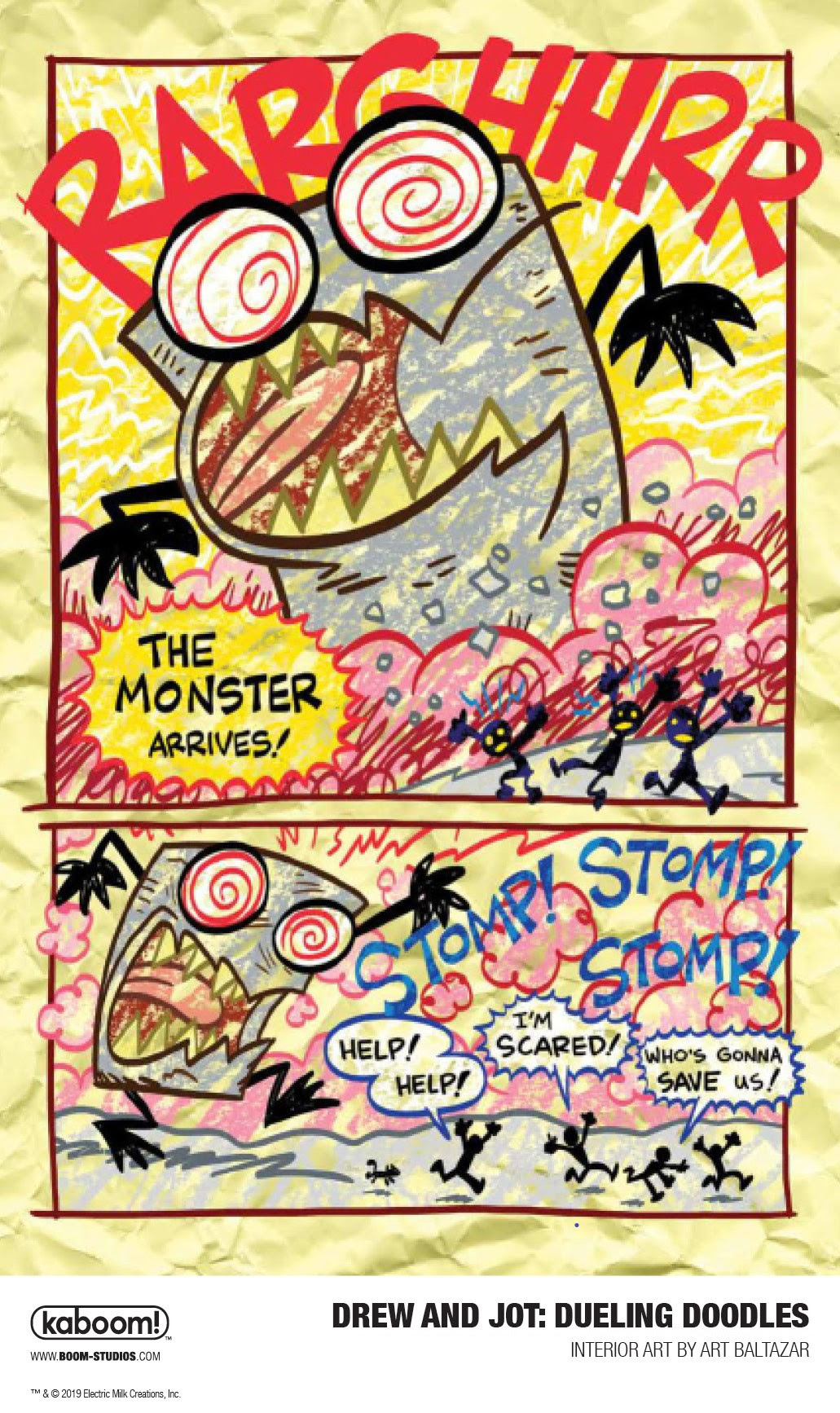 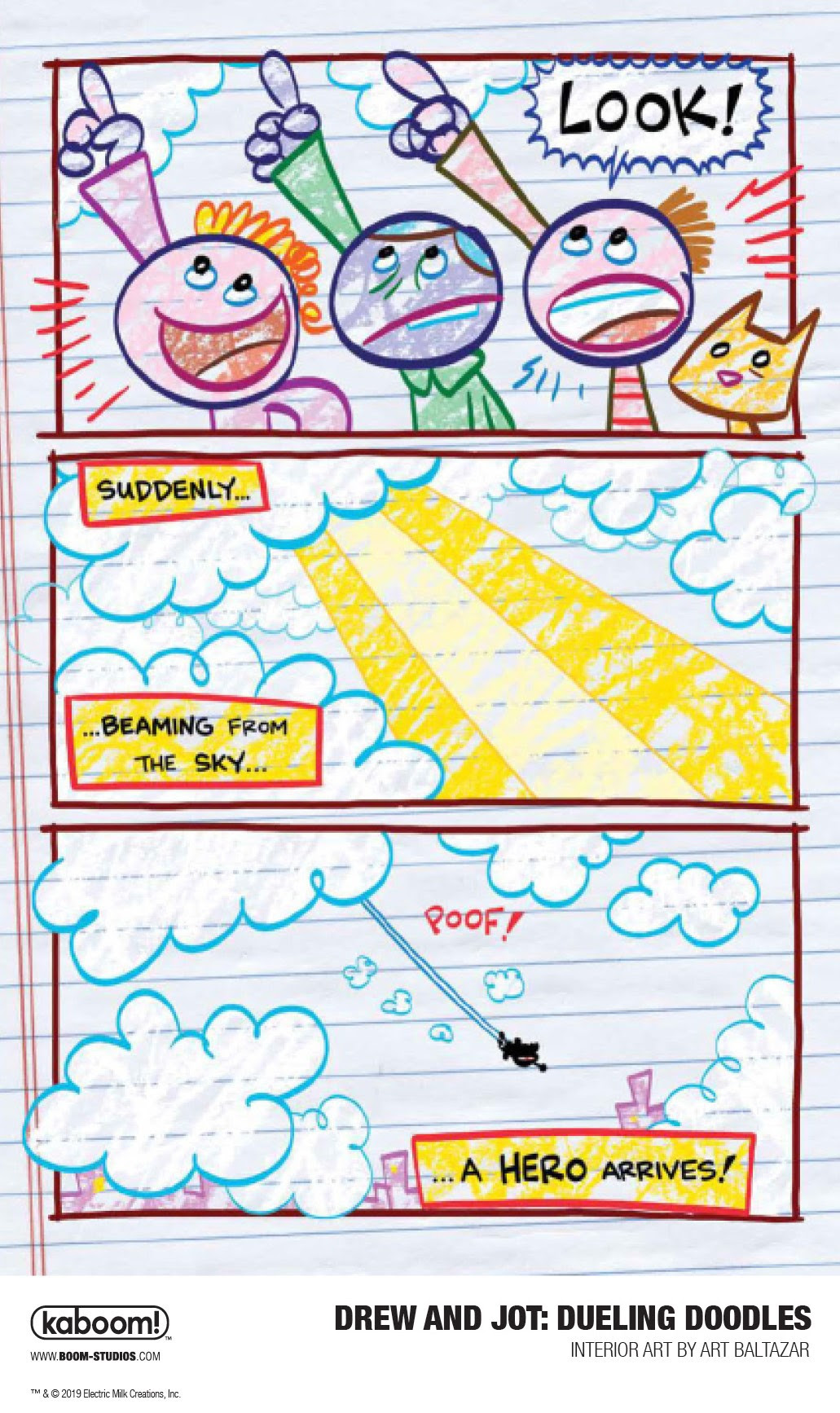 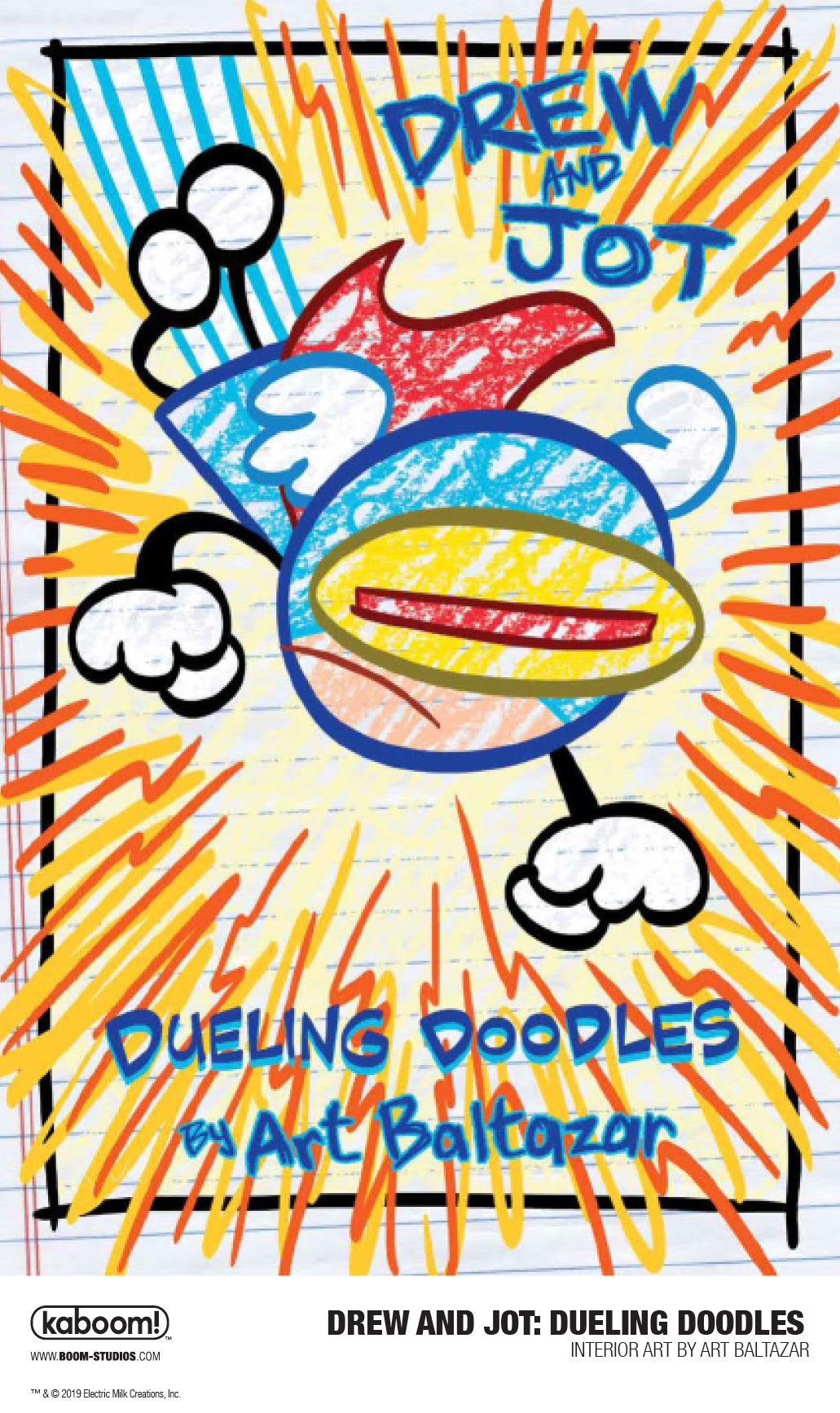 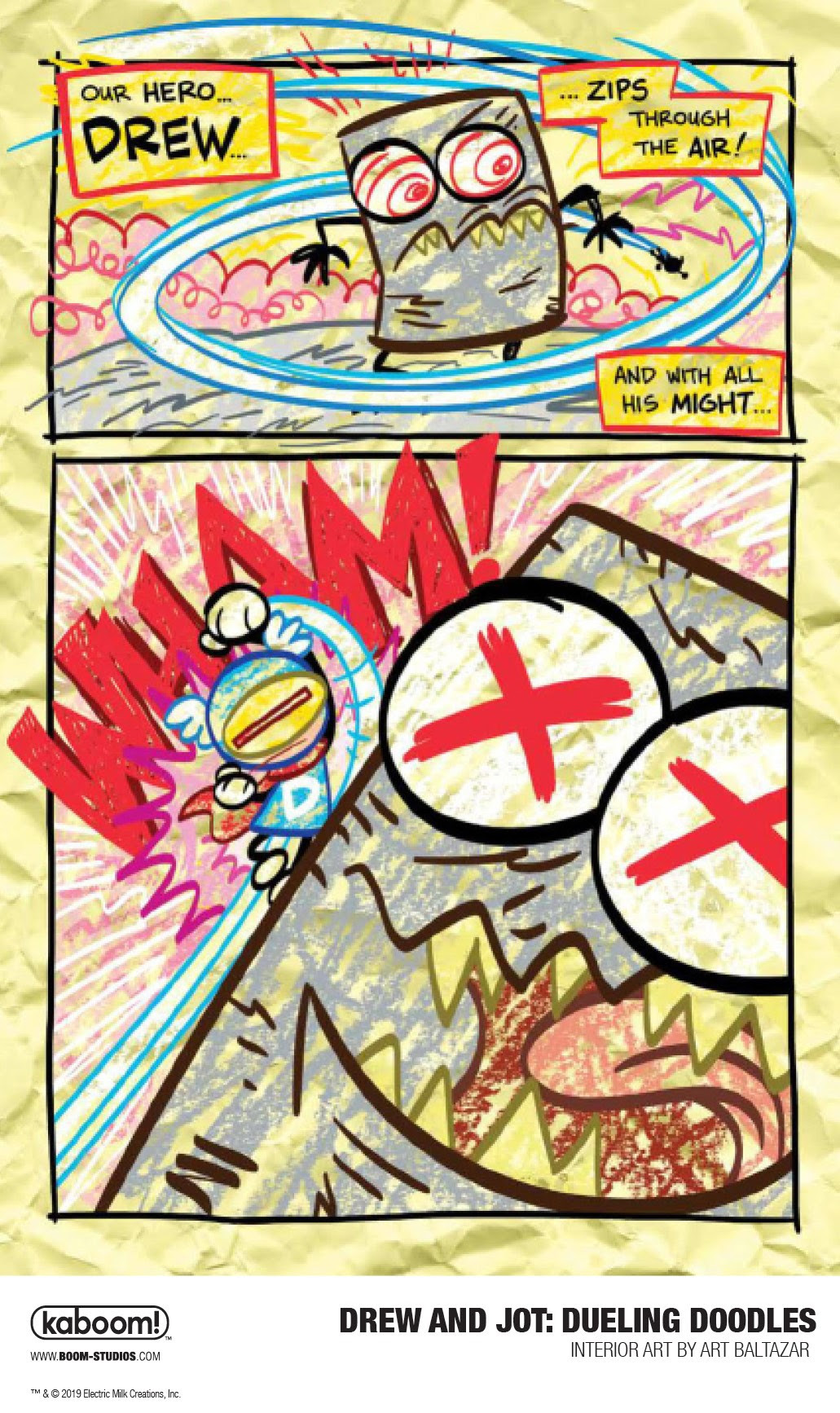 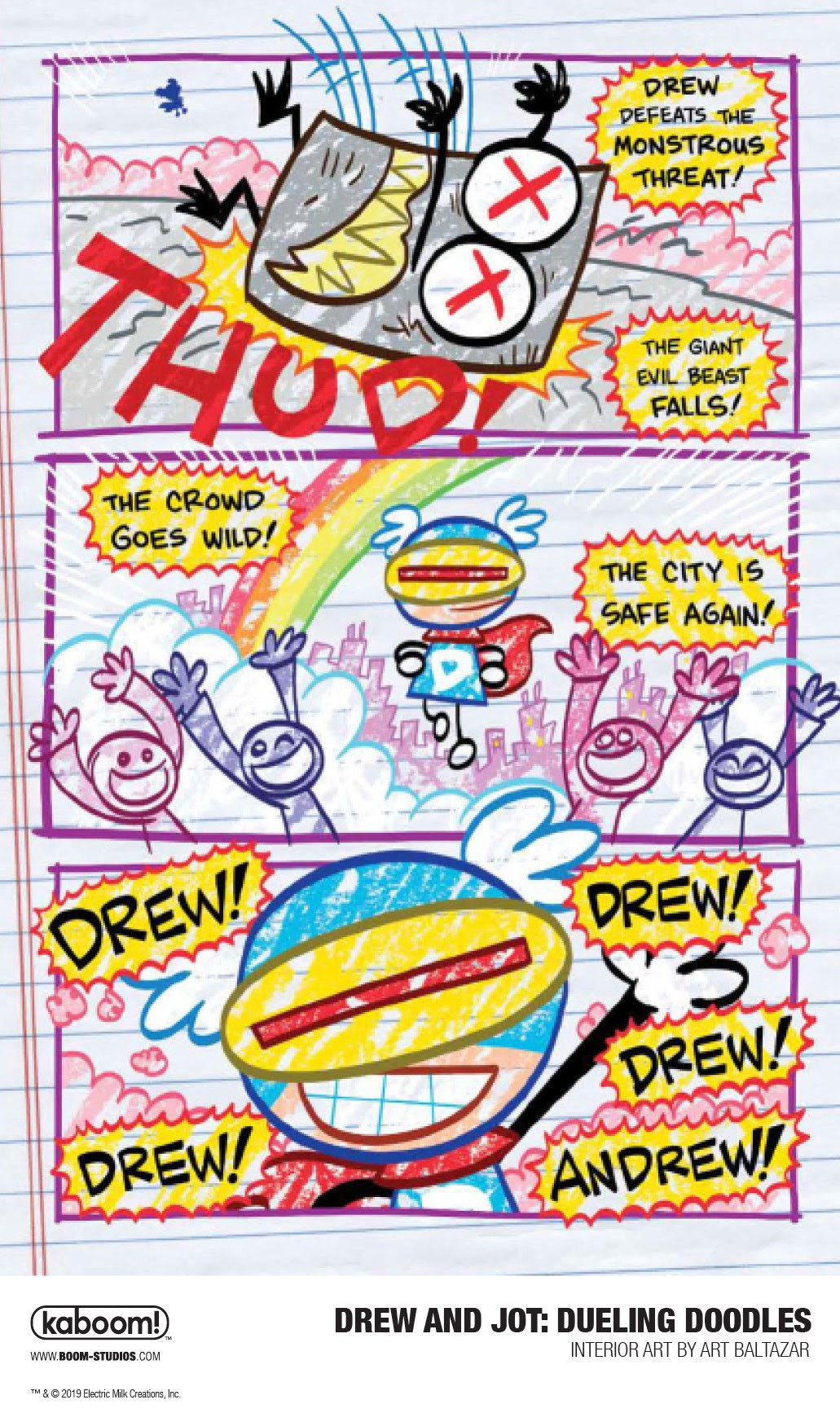 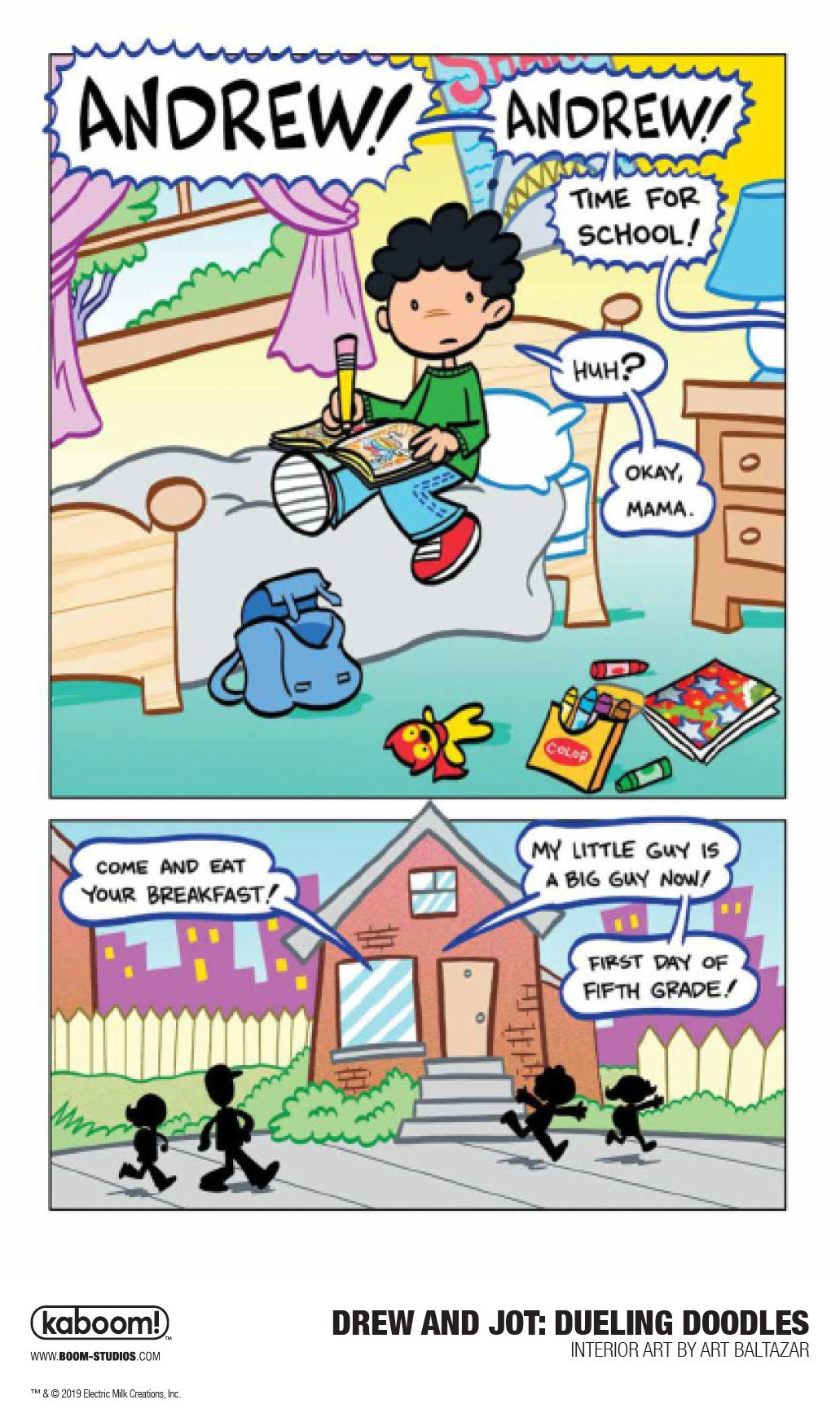 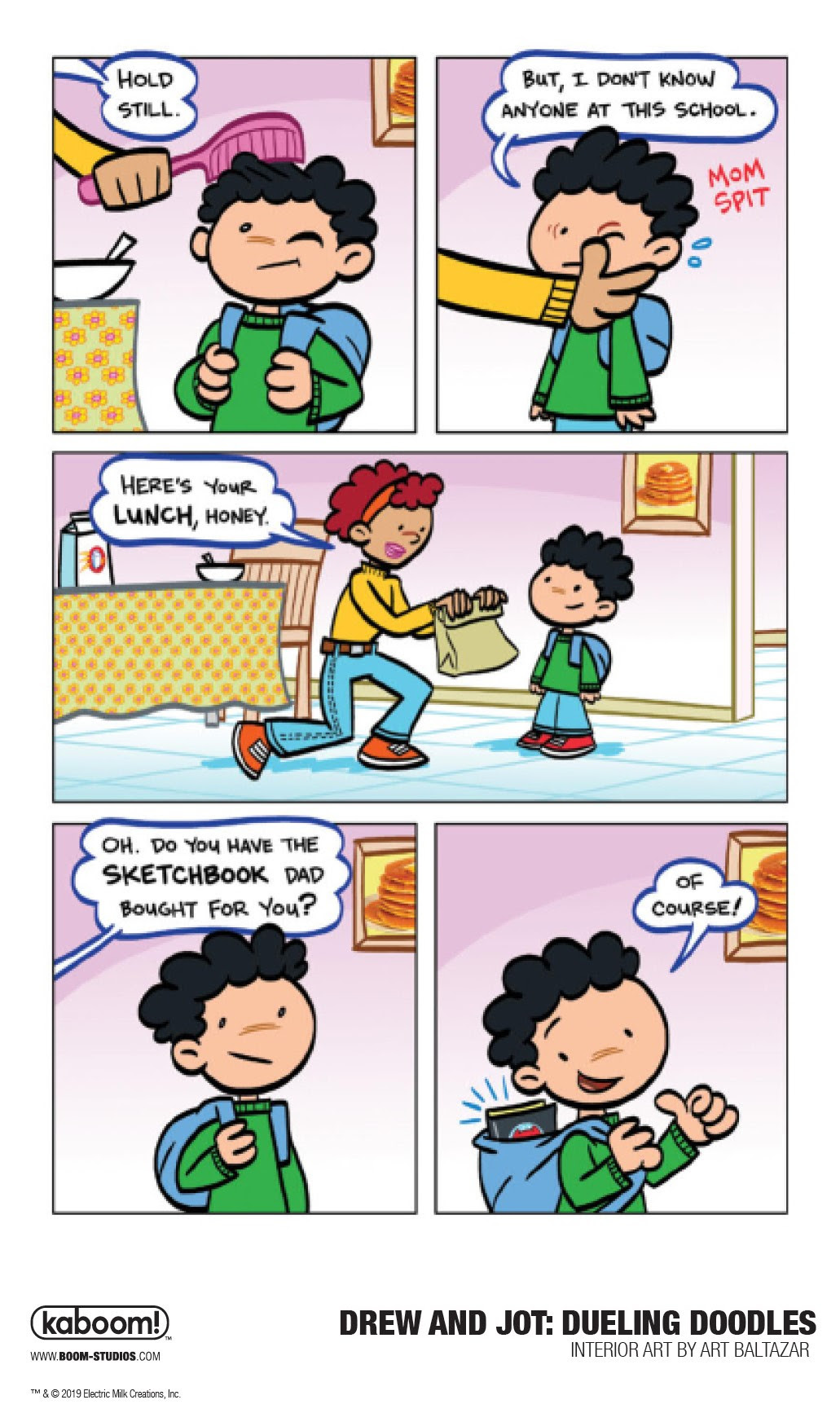 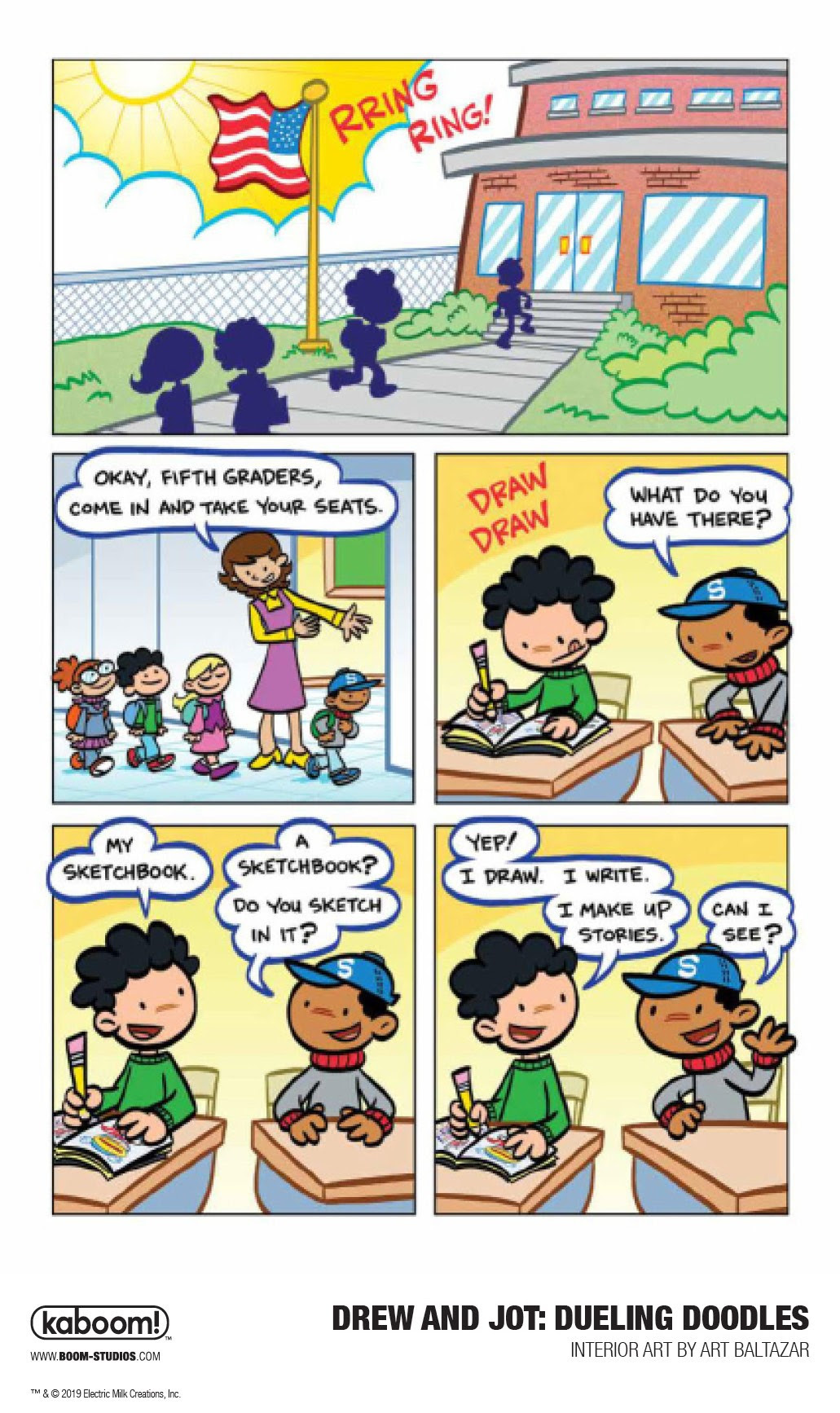