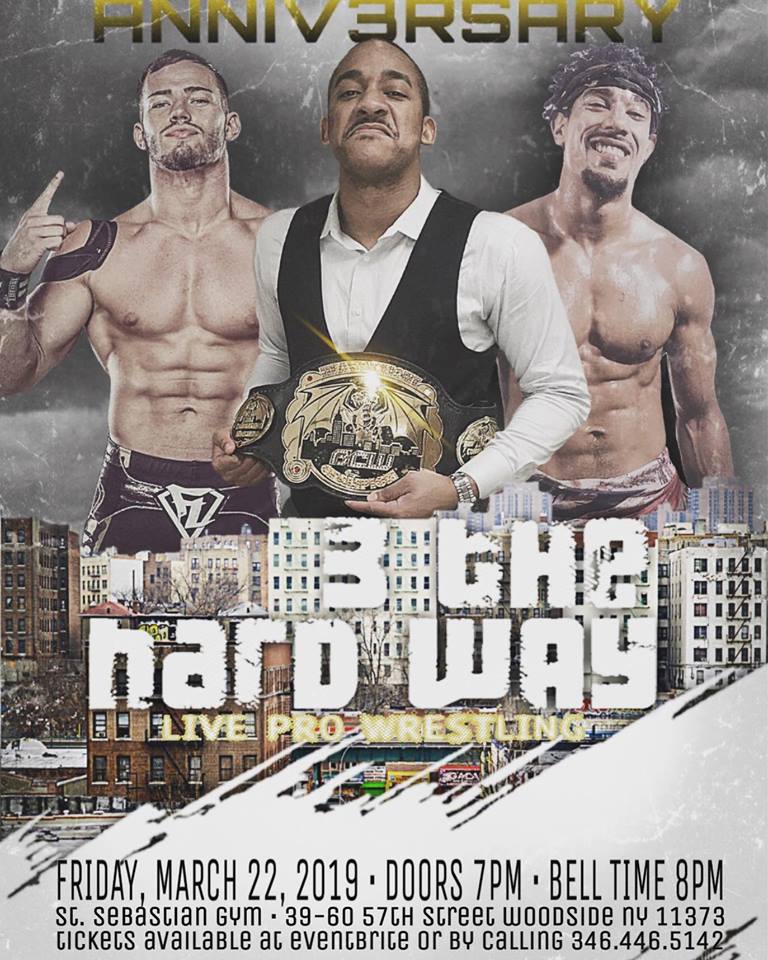 On March 22nd, 2019 (A Friday) my “home” wrestling company Brii Combination Wrestling will be celebrating their third anniversary in a show called 3 The Hard Way. The card lined up for this is absolutely amazing. Taking place a week before the huge Mania week in NYC where many companies from all over the US and even Japan will be putting on their biggest show BCW has been hard working to make sure this show will be as much a Brii-Mania (as it were). I am very proud of the work I’ve done at BCW over the last year in promoting before and after, running production at the shows and helping to make the entire show flows alongside our great staff; and I look forward to doing so again on this date.

With all that said let’s take in depth look at this amazing card.
(Sprinkled through out the post will be photos from over the year at BCW that I shot personally)

In a exhibition tag team bout from the company Pro Wrestling Magic the American Murder Society of Steve Off and Aaron Bradley will face “King of Drivers” Everett Cross and TJ Crawford. PWM and BCW are working on future collaborations, so this is a perfect chance for the audience to discover talent they may not be familiar with from other areas of the North East.

In a match in which two young talents make their BCW debut, Gabriel Skye will face off against Tristan Thai. These two are not just tag team partners, but also stable and training mates with the East Coast Syndicate of the Deady Saiyan Squad. Here in BCW though no free rides for the young and hungry. They’re going to have to prove themselves by fighting each other.

At our last show Riley Shepard was robbed of her chance to compete in the Queen of the North tournament and become the first BCW woman’s champion. Now she gets her chance to possibly rectify that in a #1 contender’s match against the woman Faye Jackson defeated to win that title in Tasha Steelz. These two ladies both have tons to fight for and will leave nothing in the ring.

The FEST Wrestling (out of Central Florida) Champion Saieve Al Sabah, ho made an amazing first time match in NYC at BCW is coming back and was granted permission to defend the title at 3 The Hard Way. He put out an open challenge and instead of one opponent though he ended up with three. Ace Andrews and Absolute Alvin Alvarez have been Brii Combination regulars who have shown what they can bring to the table every day. Joining this four way is member of The Skulk, Leon Ruff. AR Foxx has turned his crew in some of the toughest individuals around and with Ruff, Ace, Alvarez and champion Saieve in the mix this is going to be quite the contest.

Making their return to BCW are long time favorites Lance Lude, Rob Killjoy with their guidance, Coach Mikey collectively The Ugly Ducklings. Every appearance they have made in BCW has made them feel like true roster and family and it is really exciting to have them be back for our third anniversary. They won’t have an easy time of things though as they face rising stars and members of AR Foxx’s The Skulk, Leon Grey and Adrian Alanis. Every match on this show has the possibility of show stealer and this is no different.

In a rematch almost six years to date, former Brii Combination Wrestling champion Azrieal shall face the superstar A.R. Fox. These men are both very different men then they were six years ago. Fox is defending his prestige and his name, along with making sure his students The Skulk seem him do well while Azrieal feels he has something to prove especially after recent failings. Azrieal has all the skills and has become a much better talent since the last time these two met, but so has AR Fox, which just means, this will be a battle for the ages.

While we have tag matches, women’s matches, singles, four ways and more, there’s something for those fans who like a little more violence. The culmination of the war between The Deadly Saiyan Squad (Eric Jayden, Rick Rekon, Chris Barton and Dominic Denaro) and Frankie Flow’s Legendary Action Wrestling has reached a fever pitched through LAW and Brii Combination. It comes to an end as all four members of DSS team up against Flow and whoever he brings in a

Tables, Ladders and Chairs match. People will be smashed, crashed, and destroyed in this brutal contest with no rules and plenty weapons. Deady Sayians scream of “Change Through Violence” and we shall see it cause LAW won’t go down without a fight.

The two titles of Brii Combination will both be in the line and the champions have their work cut of for them in these major defenses.

In her first match as champion, Faye Jackson will have the formidable opponent of someone she knows very well in the living legend Sumie Sakai. The two were once tag team partners and amazingly have never faced each other one on one. This has been building for three years, as Faye is having the best 2019 and one of the best years of her career she comes head to head with someone who can stop all her momentum because the now former Women of Honor champion is going to one some gold for herself and that Brii Combination Women’s Title is beautiful.

BCW World Champion Darius Carter won’t get to rest on his laurels in what will also be a first time match as he has to beat Austin Theory to keep his reign intact. Austin has had an impressive run, but also has had some pitfalls along the way. While still EVOLVE champion, he failed to capture more gold recently and has more and more opponents gunning for that EVOLVE title. Darius Carter might even be one of those people in the future, but first he must defend his BCW title successfully.

On top of all this great action there will also the regular love and camaraderie of an amazing audience but also an Anniversary wouldn’t be one without a party, so we shall be having one. An Afterparty that is, a Karaoke party hosted by the house podcast of Brii Combination, A Shot of Wrestling located just around the corner from the venue.

This is truly a not miss event. The chances of tickets at the door are very low so I suggest getting them now and them come Friday night, March 22nd prepare for the time of your life.

Tickets available on Eventbrite, Groupon, and direct from Brii Combination.