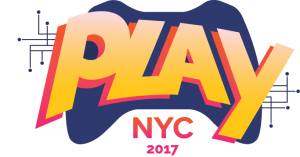 On August 19-20, 2017 NYC game creation and education group Playcrafting hosts the first major video game convention in NYC combining PAX and GDC as best they can.  While New York has hosted game conferences and major panel talks and New York Comic Con has hosted major publishers such as Square Enix and Ubisoft, there has yet to be something for the very powerful indie market that exists not only in NYC but nationwide and at a cost and set-up to be enjoyed by newcomer, experienced player, and developer.  PLAY NYC gears to change all that.

Many websites like Polygon and others have reported or interviewed the organizers of this awesome show.  They’ve focused more on the larger picture though, which is very important, but here at Pop-Culture Spectrum while we do enjoy all facets of entertainment there are still specific parts of the entertainments we enjoy.  That also applies to video games.  So upon that, we shall take a closer look at the talks being conducted on both days that are compelling to us.  A few developers have also done pre-contact of their games being displayed so I shall be give a mini-preview via that of the diversity to expect at the show.

Day one has a lot of amazing panels on the state of the industry, working in the industry and being press in the industry… all truly compelling, but exceptionally exciting are that that Mark Roos, followed by Zac Zinger shall be discussing the importance of music in games.  Both men have interesting pedigrees in the music industry as well as in the video game music industry so hearing from them shall be fascinating.

The Saturday evening panels will end with a performance from Greg Heffernan, who my research states is Cosmo D, developer of The Norwood Suite.

On Sunday the writer of point n click adventure, The Long Road, Leif Oleson-Cormack shall discuss working in game narrative.  Leif is also a playwright and standup so this has the promise of being very entertaining.

Dreamsail Games, a VR developer will have a later after noon talk in which they might be announcing a new project.

On top of these awesome panels which this is just a sample though there’s that show floor.  Here’s just a sample of some games featured on the floor that shows the diversity of the show and gaming itself. 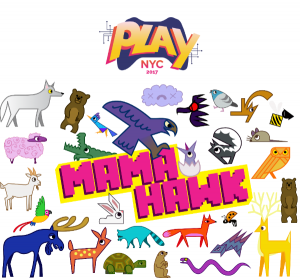 Vidar is a create your own narrative within the old style JRPG graphical style, it’s Steam page is at http://store.steampowered.com/app/355370/Vidar/

Hero’s Crossing is a strategy board game about running an RPG town.  This is an actual table top game but is based in Video game mechanics.  It’s really different, check out the page link in the title.

Mama Hawk is a mobile game developed by Computer Lunch that is also being developed for PC/Mac in which you catch animals to feed your baby birds.  I tried out their Android beta and it’s really cool and super cute.

and of course as the games writer shall have a speak, The Low Road will also be on the floor being presented by XGen Studios.

and there’s your “quick” look.  There’s so much more though.  3 floors of games, and all kinds, VR, FPS, puzzle, tablettop, Alternate Reality, ones that use real humans and even other panels as well.  A not miss show for anyone who loves games.