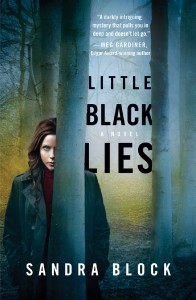 has long be a part of some of my favorite TV shows and sometimes they’ve coincided with murder mysteries. From Private Pr active to more recently Perception, the secrets hidden in the brain that have been studied by the practices of psychology, psychiatry and neurology have fascinated me. Not from a clinical standpoint but strictly from the entertainment standpoint. One of the greatest things I’ve always really enjoyed is how these people in the field of psych either studying normal behavior or in more extreme cases (and on TV that’s always the case) solving a crime are as messed up both psychologically and emotionally as the people they are helping or trying to capture.

With all this in mind knowing what I love, delving into LITTLE BLACK LIES by Sandra Block seemed a no brainer. On the cliched “check system”, it hits pretty much everything I just stated. A psychiatrist (albeit still a resident) who is emotionally messed up as well as a slew of chemical dependencies and a dark past having her on a slew on prescriptions and seeing a psychologist herself suddenly finds herself embroiled in a mysterious crime where the killer is known, but not the motive.

Written in a first person narrative, Sandra Block gives us a very like-able and appealing protagonist in Dr. Zoe Goldman with an intriguing cast of fellow doctors, family, patients, and suitors. Each chapter as structured actually feels like an episode in a mini-series one could see running on USA Network, Lifetime, ION, Oxygen or what have you. Amazingly it also surprised me with each twist and turn. Just as I thought I had it all worked out, I didn’t completely fill the puzzle together. I actually even thought maybe I was losing my mind, but I think that was partially the point and it was a worthwhile feeling to reach the conclusion.

While reading it and then reflecting I am actually brought back to the final line of the story. It isn’t actually a spoiler, it more speaks to the entire tale and every character in it and what it is trying to convey through many actions and occurrences. “We are all a little crazy”. It’s so true… but if we weren’t, I don’t think we could enjoy the stories to begin with.

LITTLE BLACK LIES by Sandra Block is from Grand Central Publishing and available now for $15.