Made for Each Other – Having a monster for a boyfriend 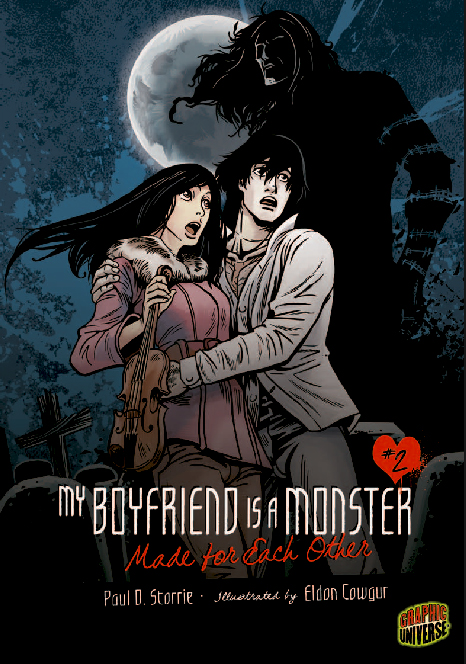 High School romances are a tricky practice. Telling quality stories about Highschool romance are an even trickier practice. They’re set-up to be hokey automatically. Looking at any of the best romantic comedy films movies about people in High School and falling in love, they have a penchant for cheesiness and ridiculous. The best of them seem to have a penchant for staying charming or endearing through their supporting characters and just something inherent.

Imagine if they tried to do that in a graphic novel, but also throw in a supernatural element. That addition could easily bring things over the top in silliness, but delicately balances that edge between sweet and ridiculous.

I was attracted to wanting to look at this after researching the online art of Eldon Cowgur. I was not familiar with him before this, but the cover pulled me in and when I saw his webcomic Astray3 I knew I had to see what he would do with a longer format comic.

While it was Eldon’s art that brought me in, he actually had a variety of flaws in art in such a larger format. Nothing super jarring, but if it wasn’t for Paul D. Storrie‘s script there was no way I’d finish this graphic novel. While the begginning starts off in a little bit too much of “You are joining us in a program that already in progresss” feel, it quickly catches up with itself and is smooth sailing from there. Discovering our female star, our male love interest and then our quirky and fun supporting cast comes with clever dialogue and what I have to assume concepts from Storrie which Eldon bring to life perfectly.

This is by far not the most perfect book. The full page reveal of the MAIN monster of this tale is not as TA-DOW as possible. While it is a great drawing into itself, in context, the dude is just not ugly enough. That’s really not a deal breaker to the enjoyment of this one and I say check it out if you like comics and romance.

I believe it was designed to reach out to kind of reader who doesn’t read and would rather read a comic, but it is pretty heavy in its comic book story-telling devices and it is not something someone who isn’t already reading comics to check it out, but what do I know?

This review was derived from a digital galley from Net Galley.  Special thanks to them and to publisher Capstone Books.

This entry was posted in Books and tagged book, book review, frankenstein. Bookmark the permalink.