Tim Schafer Games: the History of, and my Love of BROKEN AGE 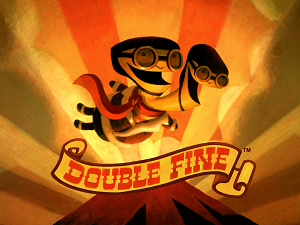 Double Fine Adventure was what turned me into a Kickstarter fiend for a few months. The only thing that ended that fun was a mix of finances and seeing certain projects I funded just take way too long. Still I pledged $100 to DFA with trust in what Tim Schafer and Nathan “Bagel” Stapley coming together and combining their efforts to create a modern point and click adventure based off the strength of Tim’s previous work and where it’d lead had he not had to move on to things such as Psychonauts and Brutal Legend. This is not a commentary on those games, but more to explain my views of what became BROKEN AGE and my feelings towards it versus how certain reviews and opinions have formulated based on preconceived expectations based on misunderstanding and lack of comprehension on the part of the backers.

Being a backer meant that for the last two weeks I have gotten to playtest, look for bugs, analyze the game and prepare for whatever post release onslaught could be coming. The fans on the boards who were negative… and I mean NEGATIVE and I can understand most of their issues. Yet, those issues are mostly based in falsehood expectations that they had. Not one of them have I heard complain about the story or the art. Many of them have complained about length and character, but the second is to each his own. Some people love Natural Born Killers, others hate it, the same with True Blood, My Little Pony, Ben 10, Batman and many many other things. One person will say the character was full of emption and I could really relate and another person of the same exact character can say they had no emotion and could not relate at all. These are things that happen with every creative piece of art ever made and BROKEN AGE truly is a piece of art and it is a game.

It is is not an interactive story, or an animated children’s book which you can press buttons on. It is the perfect example of an adventure game that exists as it would’ve had if when Double Fine was created did nothing but point n click games. This is how they would evolve. They wouldn’t just be retreads of Day of the Tentacle or Full Throttle or even Grim Fandango, but the next step, following the path that gaming has taken from going casual, back to hardcore, a return to casual and then reaching a happy medium that isn’t exactly a perfect balance and definitely won’t please all, but would allow for something fun, creative, purposeful, enjoyable, engaging and for some challenging, while others truly easy. For those who find it too easy though they would be getting something that no other game possessed. A special kind of charm, a witty humor, a sense of logic and story building that only Tim Schafer and a team he helped hand select could create.

My personal largest issue is people saying this is not what they expected and yet their expectations are all based on their own personal nostalgia and conception of what a Tim Schafer game is instead of the reality of it or at least to sound less biased, that there is another view of that and that the most important one is Tim Schafer’s. I will leave this argument and focus more now on the game itself and a couple of facts on the history of Tim Schafer games and Double Fine.

I feel to look properly at BROKEN AGE we must skip Monkey Island, as those were mostly Ron Gilbert games in which Tim got input but did not show us what type of game he would make. Day of the Tentacle is the first place when one sees the type of game Tim would make. Something that would take the genre to the next place. While multiple characters had been used in Maniac Mansion, finding a way to have those characters work together was new. DOTT was not as hard as people seem to remember though. Dave Grossman co-directed it and lots of his work which would be seen later on Moop & Dreadly and the Telltale Games catalog was definitely in place here… and they were equally Tim’s. Simplifying things to extract humor and thoughts but not making things so hard. The same can be said with Full Throttle, a game that was much more about fun, humor and story then trying to make things hard or complicated. It was short and balanced and even combined a difficult but not impossible action sequences, the first hint that Tim felt the best way to expand the genre was to simplify puzzles and add different types of gameplay. Full Throttle also showed Tim’s great and intriguing choices in voice casting and focusing on getting performances that would really show off his hilarious quips and really thought out storytelling. Mark Hamill, Maurce LaMarche, Tress Macneille, all inspired choices who at the time were established actors known to animation and genre fans worldwide. Then with Grim Fandango he flipped EVERYTHING upside down and made a 3D game with difficult controls, an abstract plot and even more abstract casting with voices everyone knew… Tony Plana, Maria Canals, Alan Blumenfeld and Pamela Segall-Adlon were all established actors with careers. It was an indication that if Tim could he’d really reach as far and as wide to get performances above and beyond that of a normal video game. The kind of performances we have all slowly now gotten used to, but back then… not even close to the norm.

Then… Tim Schafer stopped making point and click adventure games. Psychonauts had puzzles, but it was also an action platformer and one that took that genre into new directions with a heavy emphasis on conversations, visual cues, great storytelling with depth, and amazing acting performances. There was some really interesting casting on it with Armin Shimmerman, Josh Keaton and Tara Strong. He also proved a dedication using a lot of the talent from Throttle and Fandango. Then came Brutal Legend, turning the entire third person action adventure game in new ways and at times trying to do also way too much by adding Real Time Strategy. Yet, inspired casting, dialogue and story really leaped and showed Tim’s true talents as a director. Jack Black, Brian Posehn, Tim Curry, Jennifer Hale, Cree Summer and of course getting those legends of Rock.

After Brutal Legend and how it fared though Double Fine went smaller and Tim became a department head, while other voices in Double Fine showed how equally awesome they were. Costume Quest, Stacking, Iron Brigade, Middle Manager of Justice were all brilliant and definitely Double Fine games which also felt like Tim games even with Tasha Harris, Lee Petty, Brad Muir and Kee Chi as directors.

All this brings us to BROKEN AGE and I’ll start with this. I love it, I understand any negative reviews and complaints but respectfully disgaree with them and I think this is something all gamers who want a new experience that at the same time feels old. Tim’s handprint is all over this thing. The jokes are aplenty and funny. Some are easily missed if you don’t experiment at illogical things, but there comes the real fun of adventure games. This is the linchpin of everything for me. Tim has created something that is funny, heart warming and full of depth. Are the puzzles easy? I guess. I’ve seen plenty of people also stating they were stuck in places and actually turning to a walk-through or asking for a hint, so I think the balance has been hit. A delicate balance that any game of this type will have had trouble juggling. I believe they have done so successfully. We also really get everything we’ve gotten from Tim in the past, innovation, the next step. This is the game he’d of made in 2014 as an adventure game especially if Psychonauts and Brutal Legend were point and clicks if he had complete control without publishers and never turning to Kickstarter in the first place. Turn to Kickstarter he did though and that created a whole different setup. Because this might not be the game he would’ve made under a publisher. A publisher would’ve maybe given him that little amount asked for and then he’d make a game and publishers would complain instead of fans. All this could be wrong, but it’s what I feel and isn’t that what reviews are, feelings?

I think the biggest thing that makes BROKEN AGE special is twofold.

Firstly, taking the evolution of casting to the next level. Tim brought in a ton of old friends along with him, including the folks with him since Day of the Tentacle and even bringing back Jack Black, as well as Cree Summer and even recruiting Wil Wheaton again. It’s the NEW people that are so exciting though. In the leads Elijah Wood (yes, that guy!), Masasa Moyo (best known for Team America: World Police and Young Justice), and David Kaufman (Danny Phantom and animated Jimmy Olsen); joining them in minor roles are major voice actresses like Hynden Welch and Grey Delisle with a final extra special appearance by the creator of Adventure Time & Bravest Warriors (and the voice of Spacy Lump Princess) Pen Ward. It’s like the greatest cast ever in forever for anything.

Secondly is the art style. No game has ever looked like this, because no game has ever tried to look like a painting by Nathan Stapley (well other than the Flash game on Double Fine.com based on his comic book). While he’s been an employee at Double Fine for a long time and was previously at Lucas Arts, his personal work is something special and other worldly. His palette and style has a frenetic energy that has not been seen by many… not even his occasional mate and fellow Double Fine employees Scott Campbell, Levi Ryken or Lee Petty. “Bagel” is a very special artist and that comes through every image in the game. While Peter Chan and the other artists I mentioned had a major part in the concept art, the final look of this thing is still all through the eye of Nathan.  Words really do it no justice, so here’s two screen shots.  One from the “fantasy” world and one from the “space” world.  Both have all the artistic influences in here and really show off how absolutely beautiful this game is. 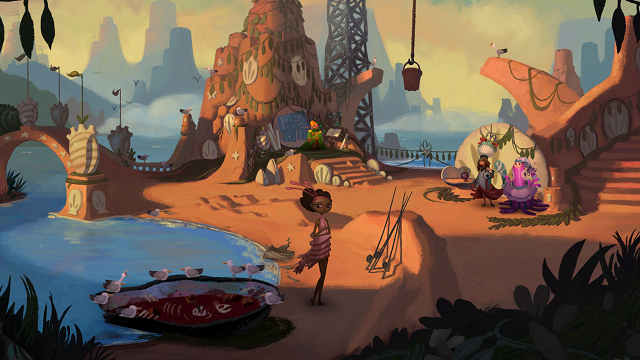 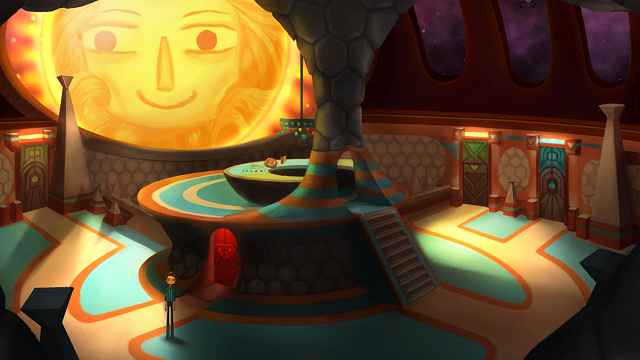 The final word from me is you need to get BROKEN AGE. Be it now (released February 28th, 2014) off STEAM to experience the awesomeness of ACT 1 and marvel at an amazing Part 1 or waiting for the whole game off of Humble and other sources. I say play it now… as you get the entire game. Also grab the soundtrack.