I never thought of Kickstarter as a place to introduce me to awesome comics artists I had previously missed out on as they made their name on the internet mostly, but it did JUST that with Kyle Starks.

The Legend of Ricky Thunder, his oft-praised wrestling meets sci-fiction/fantasy comic is what called me to his project, but as I followed his twitter and read his other comics such as PUNCH CAPITAIN and THIS IS WILD DOG I just became a fan of him period. I became super doubly excited when his stretch goals allowed him to be a in a position to finally put some of that stuff in print. Sure Ricky Thunder is awesomesauce beyond awesomesauce, and Kyle better never give up doing wrestling inspired stuff (with his Chikara love I doubt he ever will).

It’s really hard to resist Ricky Thunder, even if you absolutely utterly hate wrestling. If you hate comics, then there’s no winning you over, but if you like comics then this is a comic with almost everything. Humor, fisticuffs, drama, Presidential ghosts, aliens, robots, electricity and even Chuck Norris. For those who missed the Kickstarter, SLG Publishing is currently handling distribution. Kyle will as well soon, but for now, why wait?

The Ricky Thunder Kickstarter had stretch goals as I mentioned. One of the first being a special short follow-up to Ricky Thunder which also had an awesome pledge level of being the wrestler that Ricky faced in this followup. This opportunity got snatched up quick, which made Kyle open a new special pledge of becoming a member of the Thunderverse as part of a special trading card series and receiving the original art for it. That level tier is what I ended up going for since I lost out on the higher one.

These tiers also allowed Kyle to go over the top in his pledging, although I have to think the endorsements from Chris Sims as well as Jill Thompson helped. Reaching those stretch goals as I stated above allowed to publish a collection of some other short stories which he titled I CAN KILL ANYTHING, a line taken from the Frankenstein story in the collection. Also included are two PUNCH CAPTAIN stories (one never seen online), and his much loved WILDDOG story. As far as I know this book is only available from Kyle at conventions for now, but he is now on that circuit so here’s hoping you can see him. I CAN KILL ANYTHING is the true gem of books and shows that while Kyle is one awesome wrestling artist, he can do pretty much anything he wants to and make it fun.

Here’s my persona in the Thunderverse… one “The FEAR” Rob Connor. Those who know me well will know The FEAR name goes back way to college. It has been used as a joke, a curse, a wrestling name, a band name, a performance artist name, a comic name, a fiction name, a prose, a play and more and now it’s a FAKE wrestler too, who looks exactly like me and has a name that is almost like mine. 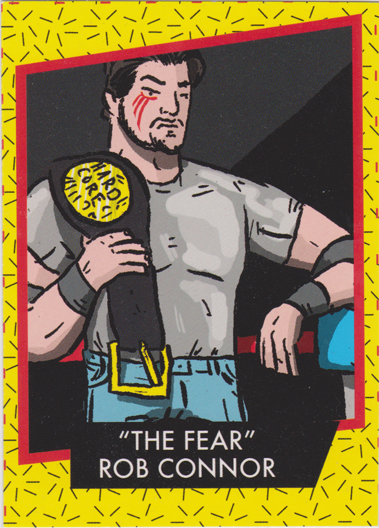 This entry was posted in Kickstarter and tagged kyle starks, ricky thunder. Bookmark the permalink.