My Sunday plans are way up in the air.  They won’t be reconciled completely till Monday at the earliest.  I’m going to the convention, but I don’t know if I’m going with my girls as I had hoped this year or that’s off the table because of scheduling conflicts.  I’m perfectly happy for it to be a day with them and figuring out how to make it fun.  My oldest niece loves comics, but the twins, not sure what they love.  Oh they like pop-culture, but con?  Not sure.  If they can’t make it there are plenty of panels for me to go to and a chance to see what I haven’t seen of the show floor, so it’ll all work out.  Here’s those panels and thoughts on them. 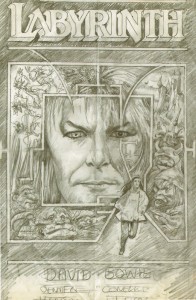 Over 30 Years with Brian & Wendy Froud: Faeries, Goblins and Trolls
10:30 am – 11:00 am
Variant Stage
I’ve loved every single Brian Froud design and art done separately and with his wife Wendy since I was a child. As much as I love Brian because the dude actually designed all the awesomeness in Labyrinth. Wendy is the famous puppet builder of the original Yoda. Together they’re awesome though and with a backlog of tales and stories, this should prove to be a very entertaining half hour talk.

Sesame Street
12:00 pm – 12:30 pm
Variant Stage
Right after the Froud’s talk Elmo hits the stage. It’d be awesome for Wendy and Brian to stick around and this became a big talk with Kevin, Brian and Wendy discussing Jim Henson and what they meant to them, but this is Kid’s Day and so it’ll probably be just a silly half hour of Elmo (with maybe not even Kevin Clash, because I swear it hasn’t sounded like Clash at the recent talk show appearances) and Gordon (in character and probably never breaking it and just being plain old Roscoe and talking about being Gordon). Like I said, Kid’s Day, so no complaints. Gotta entertain the kids on Kid’s Day especially with plenty of stuff for the adults on Sunday still.

Capcom presents DMC: The All-New Devil May Cry
Sunday, October 14, 2012
12:00 pm – 1:00 pm
1A23
Right here is one for the adults, a panel showing off new footage and discussing the very violent, demon filled, time warping reboot of Devil May Cry. Developed by Ninja Theory, the folks behind the very awesome Enslaved, I have high hopes for this and I can’t believe there are two Capcom published games at a Comic Con that actually have me excited. But they do.

MAN OF ACTION Charts the Course from Comic Books to International Animation Success!
12:00 pm – 1:00 pm
1A06
Joe Casey, Joe Kelly, Duncan Rouleau and Steven T. Seagle in conversation will probably talk about how Generator ReX started as a comic and then became an awesome show, the current version of the Ben10 series and its development and probably all of Joe Casey’s awesome comics and stuff like that. It’s a shame this at the same time as DMC, but if you think it’s bad that this is as the same time as DMC, the next panel really is a headache.

NAMCO BANDAI Games and CyberConnect2 on Creating Japanese Games for the Western World
12:00 pm – 1:00 pm
1A14
I have to think the same game players into Capcom’s DMC games are the same people who enjoy games like Tales of or Naruto. What’s especially weird is that Namco were the publishers of Ninja Theory’s Enslaved. You;d think there would be some communication here. This is one of those cases maybe once again of too many fans, schedule panels at the same time and separate them for crowd control. Hideo Baba and Hiroshi Matsuyama will be on the panel discussing the development of making games based in Japan’s style and concept that American audiences would equally enjoy and be able to pick up.

The Following Pilot Screening and Q&A
12:00 pm – 1:00 pm
1E07
This mid-season replacement/hiatus temp airing on FOX in 2013 was created by Kevin Williamson and stars Kevin Bacon, James Purefoy, Annie Parisse, Natalie Zea, Shawn Ashmore and more, the creator and named actors will be in attendance. As stated they’ll be airing that first episode scheduled sometime in January then taking questions from fans. Here’s the trailer, the show looks pretty damn great. The timing of this panel being against three other panels is very frustrating. Not just to me, but I’m sure everyone.

Sleeping Dogs – From Cancellation To Comeback and New Content
1:15 pm – 2:15 pm
1A23
I absolutely loved Sleeping Dogs. While parts were a bit too cliché, everything was borrowed & inspired by films, but not actually seen in games yet. There are things done here not even seen in games like Shenmue or Yakuza, the closest brethern to Sleeping Dogs (more so than say True Crime as it was originally intended or Grant Theft Auto). Unlike GTA, the story never suddenly loses focus. While there are side missions, you aren’t suddenly feeling like you’ve abandoned the initial plotline to follow another one (at least I always felt that way in GTA games). Anyways, the developers will be talking about creating the game as an original IP, then being picked up for publishing as a True Crime game, being dropped by the publisher after hype, trailers and even gameplay showings, then continuing development and finding a new publisher allowing the game to become an original IP again. They’ll also be revealing the details on the games first story driven DLC, Nightmare at North Point.

Disney XD – New Animated Series Screening
4:00 pm – 5:00 pm
1A21
I get a feeling this might just be a screening of Randy Cunningham: 9th Grade Ninja and their other new show Slugterra instead of an actual panel, but one can never really know. The two cartoons will still only be 44 minutes, so unless they end before schedule there could be more here.

NYCC Team Q&A
4:00 pm – 5:00 pm
1A04
This is your best chance to properly/probably thank the ReedPoppers, Lance, Peter, Kristin, Roger, Jackie, Kim, Jenny, MK… who knows. I’m making a guess of which Team Members actually make themselves available here. Best guess Lance as the man behind e-mails and Kristin as the public face of the con definitely will be. The entire team has been so good to me that in the long run of everything, this is where I’ll be to show support to what I expect to be an incredible show of excitement, craziness and surprises.

Coming next a post of stuff on the show floor to not miss, autographing opportunities I think are fab (but I might be low key on these to try and decrease crowds, as if my writing increases them) and some closing thoughts and a little look back on 2011 as perspective.