The 2012 New York Comic Con is about 2 weeks away and while tickets are sold out, that doesn’t mean people going are clear cut on what to do or what they should attend. The panel listing are a maze to explore. Finding out what’s cool and worthwhile. Figuring out what’s a miss event, exclusive, giveaway or signing on the floor is even harder. As a proud press member for the last four years of the convention (year 1 and 2 I went as a consumer, years 3 and 4 I was with an exhibitor, different one, while 5 and 6 and now 7 I’ve been as a journalist but no booth) I feel it is partially my job to not only cover the conevntion but promote specific things that excite me in my own language that explains it and might sell it even more than it’s press releases or write ups.

This is the first of these. I’ll be breaking things down into Panels and since Friday & Saturday are super long days breaking them into Part 1 & 2 for reading ease. Here we go with the special Thursday night Preview though, open to Press, Pros, Ultimate Access, Special Access, and 4 Day Ticket Holders. (All those sold out so there’s actually A LOT of them).

THURSDAY
Comics Studies Conference: The Origins of Leaping Tall Buildings: Finding New Ways to Document the Creators Behind the Comics
4:00 pm – 5:00 pm
1A07
One of the smartest comics scholars I know, Hannah Means-Shannon, college professor and contributor to Sequart, The Beat, Trip City and other places will be moderating this discussion with writer/journalist Christopher Irving, photographer/journalist Seth Kushner and designer Eric Skillman to discuss the history and making of their comics profiles book, Leaping Tall Buildings, in probably one of the more in depth, intellectual conversations of the show. Especially since it’s on the “education” tract in the Thursday sessions during Preview Night. It should be compelling and exciting AND there’s a flyer! 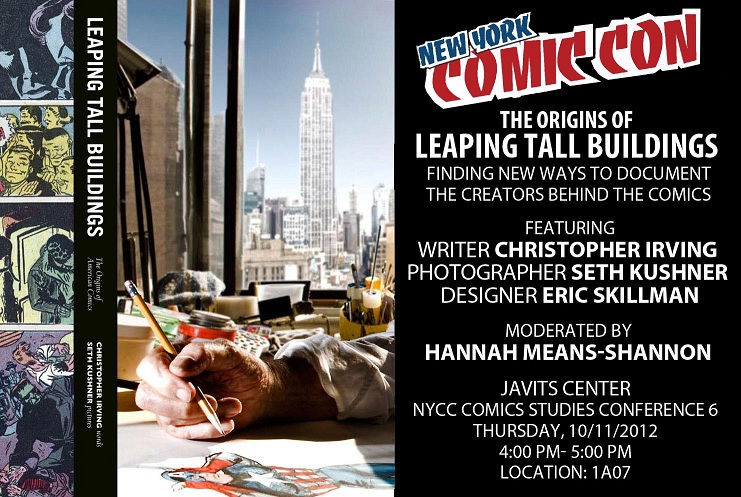 Justice Is Served
5:00 pm – 6:00 pm
1A14
Amber Benson and Thomas Sniegoski are both on this panel about novelists who write books which are essentially crime novels with some kind of supernatural twist. I’ve read a lot more of Tom than Amber and I kind of just like looking at Amber. Can you blame me? Look at her. But I have read her books and she’s a really good writer. 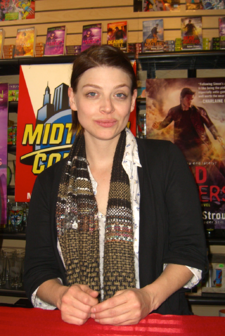 My Little Pony
6:15 pm – 7:15 pm
1A06
I’m not a Brony, but I do like Friendship is Magic. Hasbro’s toy line is part of this as well. I wish I knew who the guests/speakers were and a bit more about what this was about, but the fact that exists piques my interest.

The Image Revolution Documentary
6:30 pm – 7:30 pm
1A04
Sequart were able to successfully fund this much larger project than their more singular focused productions through Kickstarter. I’ve been following its progress and I’m interested in seeing where they are at in production. I know they just finished new interviews, so it’s becoming a great documentary hopefully. Curious to see what special Image guest they have show up as well. Could be anyone from While to Larsen to even Jim Lee (doubtful).

NYCC Kick-Off Concert with Ben Folds Five
Thursday, October 11, 2012
8:00 pm – 10:00 pm
IGN Theater
I am all about this concert. You have no freaking clue how much I am into this concert. I don’t even want to get into it. It’s an entire article. I just hope they find a way to have the Fraggles on stage or draw some dicks on the wall. That is if they do just the new album. I wouldn’t mind hearing “Magic” or “Where’s Summer B.?”… Seriously though, if Chris Hardwick and Rob Corrdry aren’t on stage for a performance of “Do It Anyway” since it IS New York Comic Con I might actually call fail!