You’re Nicked (A review of The Sweeney)

When I first heard about THE SWEENEY the only thing I knew was that it starred Ray Winstone and he’d be a tough as nails, grizzled, rough & tumble cop. That sold me on wanting to see it. I knew nothing about the fact that it was an extremely popular television series in the 1970s. Nor that it was based upon an actual elite police squad that was taken down for truly working on the gray side of the law, using corruption and illegal tactics to take down bigger bad guys, but in the end being thrown in jail themselves.

In 2012’s THE SWEENEY, the elite police squad is just as gray. They’re the law, but they work outside the law and this isn’t sitting pretty with IID or Internal Affairs as we know them here. In many ways because of the fact that the story itself in over 30 years old and is just adapted for modern audiences with current technology, film style and such it can at times come off as cliché. I personally have NO issues with this, the best crime stories are not about the plot points, but the way they are delivered. THE SWEENEY delivers with bombastic, exhilarating action and intense, very natural acting.

The film as a whole had only one flaw. For the American audience or at least my own ears, I had to actually put the subtitles on. These are some of the thickest, most roughest United Kingdom accents I have ever heard in my life. Ray being the harshest of all, pulling in all his cockney to be a right bastard. That’s isn’t a detriment though, since I’m reviewing a Blu-Ray so subtitles? Just put them up there. Sure for someone who’s blind or can’t read this will be a problem, but do blind people watch action films? And do people without enough education to know how to read bother with films that have complicated plots with twists and turns and tons of character development? Maybe they do… but they can still enjoy this film, because well, if they can do that, then this film will have something for them.

The gun fights are crazy, the car chases are awesome, the cinematography is brilliant. Hell, just for the robbery, shooting and foot chase through Trafalgar Square which is covered extensively on the extras makes this film a must see. 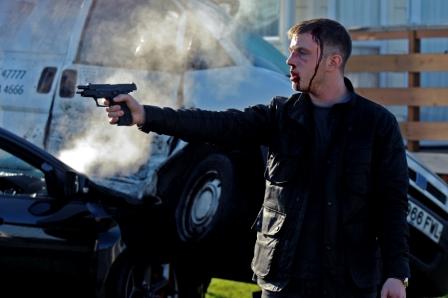 Yet that isn’t the only greatness. There are two co-stars that bring a lot of notable excitement to the film on top of Winstone’s insanity. Hayley Battle, whom American audiences learned to love in Captain America is almost more dangerous and obviously way sexier than Ray (unless you’re thing is old, grizzled, beat up men) and turned in amazing performance. Between Falcon and this she’s quickly becoming a favorite of mine. This was also the first true star turn for musician Plan B also known as Ben Drew. His George Carter is just as important if not more important than Winstone’s Regan and he delivers a fantastic performance that really carries the film for at least 1/3rd.