The Convention Season Looms in Spring

As March roles around in 2013 it’s a time of lots and lots of action and adventure on all my favorite pop-culture fronts.

I don’t get to enjoy all of them, being conflicts, financial issues, whatever, but they’re there for the taking.

For the video game lover you have PAXEast which is quickly followed by the Game Developer’s Conference/Independent Games Festival and there’s also E3 (yet that is an industry only event).

For the wrestling fan, the weekend of April 5-7 is big for anyone willing to travel to NYC/NJ for some super craziness. It’s not just Wrestlemania weekend. That show brings with it a sold out Ring of Honor PPV and TV taping the next day, the Hall of Fame at Madison Square Garden, after parties to the Hall of Fame such as Shenanigans and MVP at Caroline’s and then there’s Wrestlecon at Meadowlands Colliseum where Chikara, Shimmer, Dragongate, Evolve, etc. are all together along with tons of legends and even Hulk Hogan to throw the best alternative to WWE ever. Although crazy rich people find a way to do everything!

I didn’t make it to PAX or GDC, I will not be at any of the wrestling stuff. I’ll be focusing on another major love of mine, comics. A lot of comics shows are going on as well.

This Saturday is the Asbury Comic Con, equally is Wondercon. The weekend after is both FLUKE and MoCCAFest. I’ll be at Asbury and volunteering at MoCCA so the bulk of this article will be focusing on those, BUT before we get to them, some quick things.

The big deal at PAX and GDC for me were DoubleFine’s first official reveal of BROKEN AGE, the game that has been in development as DFA/REDS from their big Kickstarter project which I am a major backer. I’ll probably write a ton about it eventually, but for now? Here’s the official trailer revealed to the “world” at GDC Awards and uploaded to Youtube directly after.

If I could go to Wrestlecon I’d be all over that Chikara part of it. I really want to see who Mike Quackenbush brings as his mystery partner against Shard & Jigsaw. The ROH show when SCUM should basically decimate a bunch of ROH guys should be fun too, but I can’t go… I made commitments and I’m excited for them.

If you make it out to FLUKE make a point of checking out whatever Kyle Starks has going on at his table, I’m sure whatever it is will be freaking awesome.

So coming this Saturday is the Asbury ComicCon. I have missed it when it started as just a small gathering at a bowling alley. That always sounded quite awesome, but I just never made it out there. Now it’s moved to the convention center, but is still trying to keep the just a comics con feel in a place like the boardwalk of Asbury. There’s a couple of highlights at the show and some of them share an appearance at next weekend’s MoCCaFest as well.

At Asbury there’s the official book release party/debut of the collected DEADHORSE.

As well the only east coast appearance of Box Brown for now that I know of, as he’ll be at SPOKE next weekend. Oh wait, Toronto is the East Coast. 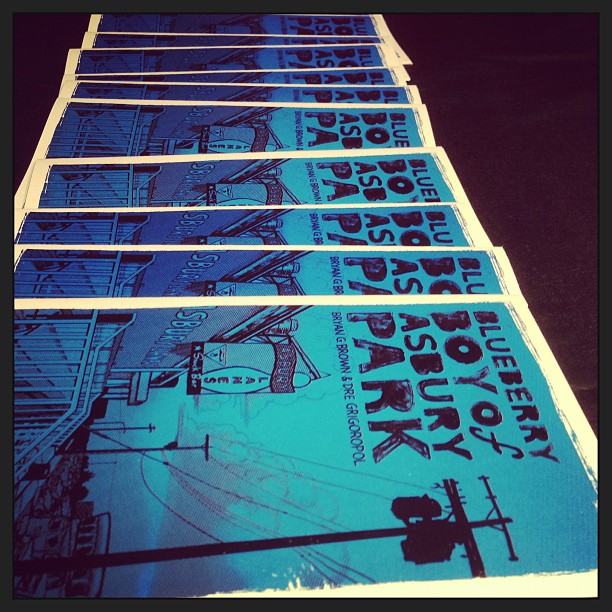 Asbury also has some amazing panels. In particular Brian O’Halloran (best known to most as Dante Hicks from the Clerks films will be sitting with Mike and Ming of Comic Book Men. Also, John Holmstrom will have a discussion with Asbury Comiccon co-promoter Cliff Galbraith. Both these panels make the entire show worth it. Yet the fact that Danny Fingeroth also has sit down sessions with Al Jaffe and Bob Camp in talk with Craig Yoe just add to it as well. Throw in a ton of creators who actually will not be appearing at any other convention anytime soon and you have what is an awesome pre-Easter (if you do Easter) event.

Head over to the Asbury Comic Con website (the link is in the words or click on that banner to your right) and get your tickets now and enjoy your Saturday, March 30, 2013, in New Jersey… of all places).

As said prior the weekend of April 6-7th, 2013 I’ll be at MoCCaFest 2013. I attempted to find out all the major debuts and such by hunting through Twitter and Google Blog search and didn’t find tons of info, but what I did shall be below. MoCCa is amazing show. This will be my 11th year attending including the one year I almost didn’t go, but went anyways. Crazy to even think that. Here’s some highlights I could find.

Peter Kuper will debuting and signing a limited edition version of his new book. 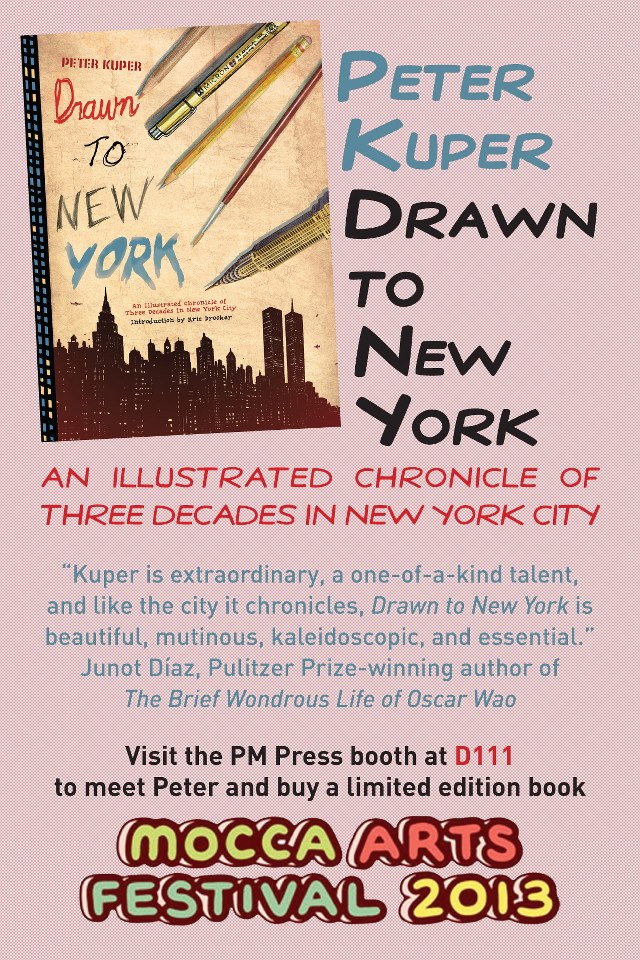 Matt Miner who recently had the successful Kickstarter campaign for his comic LIBERATOR will be around with exclusives.

Angela Rizza will be tabled with Chase Stone right where there will also be a MoCCa Art Exhibit. They made a pretty cool banner. 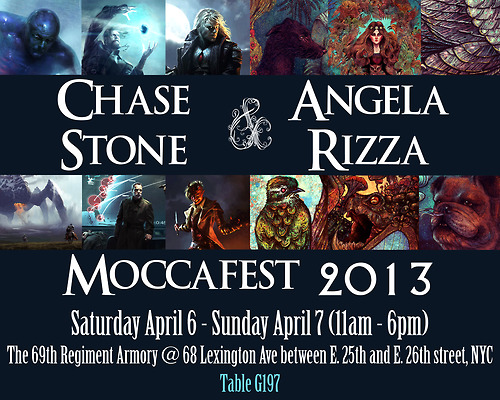 Rachel Dukes will have a brand new Cat mini comic 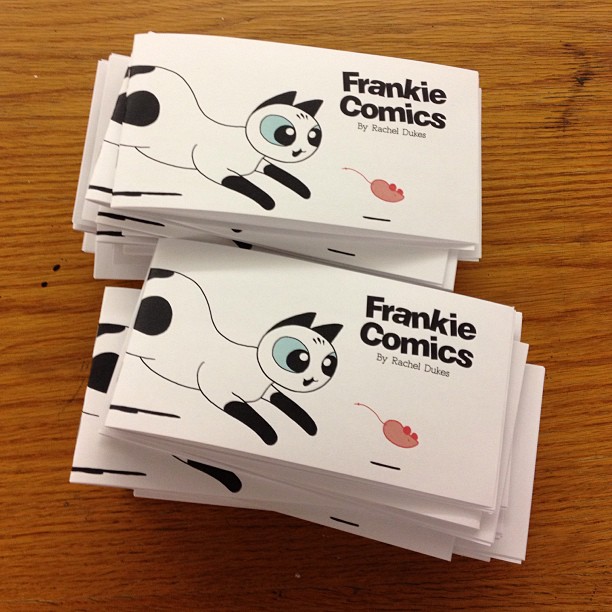 Will Laren will be premiering Slurricane #5

Jenna Trost will have a super super limited (I bet I don’t get one) handmade book of Unraveling Traveling “Never Books”.

Nate Bear and Laura G are working on some new stuff for the show. 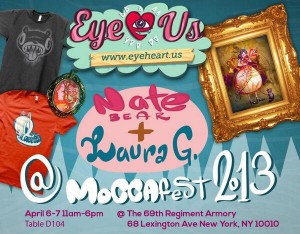 Kat Fajardo along with the rest of Cartoon Allies of SVA will be at MoCCA with new stuff. They’re also going to be at Asbury Comic Con so, you have less of an excuse to miss them.

The same goes for Mike Dawson. Not that he’ll have anything new, but he’ll have great stuff that if you missed, get it, and also you know, tell him how great Ink Panthers is.

Oh and Claire Connelly will be at Asbury and MoCCa as well with some awesome comics.

Now I have to get myself together for the volunteer Meet & Greet for MoCCaFest at the Society of Illustrators. I’m probably more excited than I should be.

This entry was posted in Comics and tagged asbury comic con, Comics, moccafest. Bookmark the permalink.