Double Fine Games came into super extra megaton popularity earlier this year with their monumental Kickstarter that launched the  excellent Double Fine Adventure game now codenamed REDS along with the so far six episode documentary Doublefine Adventure from 2 Player Productions.  If you aren’t already a backer on that and getting to enjoy the awesoment development, art, production and stories on this future old school inspired modern adventure point n click adventure game from the mind of Tim Schaefer and as of now featuring the art design of Peter Chan, Scott Campbell and most specifically Nathan “Bagel” Stapely, there’s still time with their Slacker Backer program.  That isn’t what this is about though.

In the continued interests of opening of their doors to all, Double Fine decided to take their annual two week new idea/prototype development session a public event.  Titled Amnesia Fortnight, previous years have brought forth prototypes that gave us games such as Costume Quest, Stacking, Trenched and Once Upon A Monster.   Now this year we’ll be seeing five new prototypes, but for the first time these prototypes will be shared with the public.  Well that is if they buy into the Humble Bundle for the program.   Not only will one get these 5 new prototypes though, they’ll also get three old prototypes if they give at least the minimum top price suggested on the bundle.  Humble Bundle gives to charity as much as it does itself and the developers, you get to choose how much you give for how much you get and how it gets allocated.  The three prototypes available are Happy Song (which became Once Upon A Monster), the original Costume Quest and a game called Brazen which was made in last years Fortnight and is now being prepared for further development.  Along with the prototypes you’ll also get documentary episodes of the daily progress on the development produced by 2 Player.  On top of all that there is also a live stream from twitch, running from 10 AM-6 PM PST.  It has been running since last week and shall continue along till the games are ready to be shared in the two week process. Each of the five games being developed were actually whittled down from 23 pitches from various Double Fine employees which were voted upon by fans who discovered the Humble Bundle project on day one and wanted to be right on the ground floor.  It could be said the five best choices were selected, but some of the games not being worked on this Fortnight definitely deserve exploring at some point and I believe this is honest being considered.  Of the five games I personally am excited for the two artistically envisioned games, but from the work shown on all them they should all be awesome.  Here’s a list of the five, short descriptions based on my personal understanding, and a cool progress image that shows what I think is exciting.  More images can be seen on the Doublefine Tumblr and the Doublefine forums. The White Birch: A plat-former with exploration, there won’t be foes, but the protagonist must continue climbing and exploring to reach the top of a strange tower where an actual White Birch tree sits with a prize and I assume the only way home.  I believe the prizes and exploration will change in repeated playthroughs as there will be multiple paths to the top, but not ways to actually go back and explore the other paths once you choose one.  Here’s some early concept art from Derek Brand. 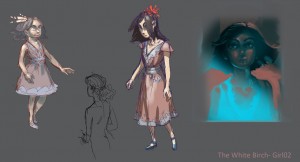 Black Lake: From the mind of Levi Ryken, this looks like it’ll be a 3rd person top down perspective.  You’ll be playing a mythical animal hunter who doesn’t actually hunt, but uses some type of dream control mechanic to capture these supernatural beasts in a combination of action/adventure and another mechanic not fully explored.  Levi’s art concepts are what really attracted me on this one.  Here’s a final version of the lead protagonist he designed.

Autonomous: The brainchild of Lee Petty, the same man who gave us the ingenious STACKING, this is set to be a first person game (the first 1st person game from Double Fine they keep saying, although I thought that the cancelled SPECS was first person).  In it your character programs, but does not control Automotons… also known as robots.  Through basic input these bots will help the character explore and survive the world he has found himself in.  The team is hard at work on robots and especially making really awesome looking arms that would be the main inputting.  Here’s Lee’s early arms design that 3d modeller Ray Crook has been building furiously. 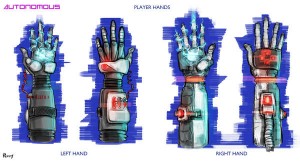 Spacebase DF-9:  A simesque game that being pitched/promoted as Dwarf Fortress in Space with graphics (and I assume simpler mechanics).  You’ll be building a spacebase, hiring employees, setting up shop, and placing characters in situations and then watch what happens, with each playthrough creating a virtual fiction/story that I assume can be easily shared.  I have to admit I am still not sold completely on where the fun is here.  I understand some people find this fun and once upon a time I actually thought the idea of games like this sounded like the most fun ever, but I’ve changed.  What I feel shall be one of the saving graces of this game is the creative minds of DF  instilling their humorous creative juices and also that Nathan Stapely is working on the character designs that will if anything make the game fun to look at.  I know I keep using the word game, instead of demo and/or prototype… as none of these will be full games, but a game is still something someone can play and hopefully have fun with, so… game.  Spacebase doesn’t really have any mockup graphics to show off that make me go “Oooh…” but the twitch.tv stream showed Bagel working on the characters and they look great.

Hack n Slash:  A NES/SNES Zelda-esque game in which instead of slashing away at stuff, you actually try to hack the game using codes, glitches and various secrets to find your way around monsters, walls, and more.  Team leader, head programmer Brandon Dillon really seems to have most of the game figured out mentally, so it all comes down to the programming itself.   Mark Hamer has come up with a great character design and Raz has conceptualized an awesome background, so visually this game is looking awesome.  I actually at first really couldn’t even see how this game would work, but I really do look forward to it. 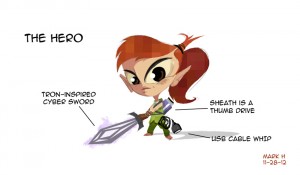 So get in on the ground floor now for what could be the next best great Double Fine game to come after the upcoming The Cave from the mind of Ron Gilbert, the iOS superhero management sim Middle Manager of Justice, the sequel to Double Fine Action Theater known as Kinect Party, Double Fine Adventure and who knows what else they have up their sleeves.  If the 2012  Amnesia Fortnight is any hint to some of the ideas running around, expect awesomeness.