With almost a week and a half of work done, over nine days days of streaming footage, six documents of daily work edited by the team at 2 Player Productions and many many Double Fine forum and tumblr posts with concept art, music, programming and development discussion I felt I’d do my own quick personal viewcap on the Double Fine Amnesia Fortnight. This is for myself, the Double Fine team, the people already as invested as much as I am in the progress and those who have not yet joined in and can still do so within the next two days or possibly longer.

The breakdown will be by games and my own insights and reflections.

AUTONOMOUS: Not long into the game I came up with calling the production team of this prototype PETTY CROOK. This being a what I thought a clever combination of Project Lead Lee Petty, and Lead 3D Modeler/Artist Ray Crook. While equally the team could also be called “MOO-AR PETTY CROOK IS SOULLESS” to add some more team members in to the name, that leaves out the awesome music guy Camden Stoddard, programmer Oliver Frankze and all the rest of the excellent team working on this, so…
AUTONOMOUS is A Petty Crook production…

That music by Camden btw is amazing, but is also the only music that can’t be heard outside of the twitch.tv or downloadable 2PP eps as of yet. That’s okay though as added to the Humble Bundle has been a soundtrack and as each prototype has been given it’s own cues and original music this soundtrack itself will be worth being in the bundle grip.

Brad Muir has truly been the star personality wise of this whole deal, between his recording of the Jersey bot for voices and jokingly, but not completely stating the game sucked (as it exists at the time, because the bots were just being dumb, so it became some fun to mess with, but not fun to actually play). Still I understand why so many want to to play. I personally kind of just want to mess around with it, and feel it’ll need to prove itself to me in knowing my final goal.

BLACK LAKE: Levi Ryken’s sketches and concept art are still the most top notch part of this game. Of all the games this is the one I’d want a collected concept art book 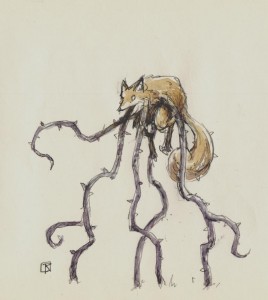 (speaking of concept art book… Double Fine actually will finally have one soon. That will be the BRUTAL LEGEND art book. It is in the current PREVIEWS Catalog in a full page spread from UDON, and comes out in February.)

I’m also really enjoying how this game is coming together, the idea of scanning for smells and sounds and then following clues to your next spot in the tracking of an animal while also trying to avoid enemies really sound intriguing for a game that from a gameplay standpoint was the weakest at first and now seems conceptually the best.

In terms of music we know that Dax Tran-Caffee has recorded accordion parts for a mechanism of gameplay which I can only assume shall also come into the actual soundtrack as well and that makes me assume that the Doublefine employee who brought him in Brent Andrew Shinn is also recording some original guitar pieces.

HACK N SLASH: While the concept art for Black Lake blows me over, especially the early sketches, it’s the final look of Hack n Slash that is really calling me. Mark Hammer’s final version of the protagonist is awesome, but even better is the work Razmig Mavlian has put in. While inspired by Zelda he’s created his own awesome background that would work well as prints, wallpapers, or whatever. Raz also did the utterly awesome logo.

I’m still unsure completely n what the game playing will be like. I’m intrigued by the ideas originally presented and seeing how they finally find their way into the prototype and how easy or difficult they’ll be to understand.

On the music end, Paul O’Rourke has outdone himself creating as of now three amazing sketches that invoke an old school feel yet at the same time being completely modern. They really should be heard and along with Camden’s tracks will make a seriously awesome soundtrack.

SPACEBASE DF-9: This actually coming together in a way that I’m actually interested in seeing the final product. While many were excited by the concept alone it has taken seeing how much work has gone into it to make me want this as much as everyone. From the choosing jobs for your individuals to the fact that Bagel is doing sitting and eating animations to the Facebook style status updates it all looks really nice.

I get a vibe of them really trying to find a way to make this gameplay that for a sim that allows even the biggest sim hater to appreciate. I really hope they pull it off, because I always had issues keeping my excitement with things of the ilk.

In terms of music, I’m really impressed by what Chris Remo has put together. It’s very atmospheric, it has the most feel of being something you’d hear in a TV show instead of a game actually. 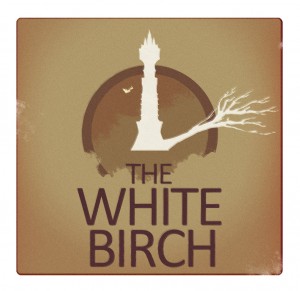 THE WHITE BIRCH: The platformer is coming together really nicely. We’ve seen her leaps on ledges, run across a bridge, climb ropes, and all in an almost finished 3d character. Over these last two days they should be able to accomplish a lot and make something that feels like a really complete minigame that if expanded could be even crazier and wild.

The only thing I don’t think we’ve seen yet is how the original idea of different prizes from climbing the tree and different pathways causing multiple playthrough has been implemented or if possibly scrapped for this prototype, only trying to prove Double Fine could make a working 3D platformer that was fun and innovative.

In terms of music, long time adventure game video game design Brian Min is really outdoing himself. On stream we saw/heard him recording live. Of all the music folks at Double Fine he’s the one I’d want to interview most. His sound career goes back to the days of Sierra at its limelight till today at Double Fine and I’m sure he has great stories. Even if he told them in instrumental musical pieces. Btw, listen to some White Birch suite.

In conclusion, as I finished writing this the Monday Standups have begun on the Stream, which is fun stuff to listen to if you’re fascinated with production like I am.

We’re heading to the end of the Fortnight here, but these next two days will be long and exciting, so hop on board while you can!