I have no memory of it unfortunately, but according to my mom I definitely had a clear cut imaginary friend when I was younger. There’s no way of knowing if he was a simple kind, the kind you’d see in Fosters for Imaginary Friends or maybe like the Family Circus. I am sure he was nothing like Budo in Matthew Dick‘s absolutely fascinating and captivating “memoirs of an imaginary friend” though. 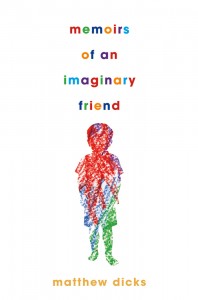 If I had to guess at my imaginary friend I’d assume he was just as human as Budo though, probably taller than me and more athletic, someone to discuss cartoons with in the morning, because ya know… who wants to talk to themselves? Still I am sure he was nothing like Budo, but whose to know. There is a chance that Matthew Dicks has delved into something we’ll never be able to prove with this novel. Maybe they aren’t as imaginary as we think… maybe they just live in a different realm.

While Budo is the voice and perspective of “memoirs”, he is not the lead character , that would be Max, a very special boy, whose actual diagnosis is never completely disclosed. He shows signs of autism, and possibly Asperger’s. I am not fully aware of either disease. I have a friend who is a very low spectrum of the autistic bend and  my father used to work with special needs children, but my own real experience is minimal other than having an immense respect for any child or adult who doesn’t let it stop them achieving a regular life full of work, love, fun and friends.

We know Max doesn’t like to be touched, he doesn’t like people or at least most people, he is very stringent in his ways and he has trouble expressing emotions. When he faces something new or different he gets stuck, like an empty wall. I saw it in my mind sort of like Tommy staring at a pinball machine, the entire world shut out and focus almost seems non-existent and in Max’s case, it being actually completely non focus. He’s very smart when it comes to traditional learning, likes to read, playing with toys, military strategy, building things with LEGOs and of all things pop culture, Star Wars.

As Budo describes both his own life as an Imaginary friend who instead Imaginary as one would think and Max’s difficult life with his parents, teachers, school bullies and more the book grows and turns in very unexpected ways. We meet the teachers, fellow students, other imaginary friends and some of the local residents, all through Budo’s very interesting and eye opening viewpoint.

There are plot twists later into the book that take what was seeming like it a sweet and simple, but written with depth story about caring, love, understanding and growing up into a tense, suspenseful, adventure thriller. That may seem like a huge leap but in context it all comes together brilliantly and in the end you feel like you’ve truly walked away with a higher understanding of growing up as a whole. Dicks also doesn’t leave one hanging on certain conceptual threads, they aren’t clear cut final thesis into the reality (per se) of imagination, death, afterlife and more, but boy does he try and I commend him for it.

I must say I truly like the original ARC cover then the one used in the UK where the book is credited to Matthew Green or the final American cover. That is why it’s the image I chose for this review.

“memoirs of an imaginary friend” came out in the U.S. In August 2012, this review was based on a complimentary Advanced Reader’s Edition.