RESONANCE: Epic Retro Sci-Fi Mystery Does Much Good (some bad)

The best Science Fiction tends to have dubious characters of gray personalities, a terse semblance of what is truly right and wrong, awkward scientific concepts which aren’t exactly plausible and usually, but not always an ending which makes one think “Well, was it all worth it?”. Mysteries seem to have this is as well and then there’s science fiction mysteries who really play into this such as Total Recall, Blade Runner, Minority Report, Twelve Monkeys, etc. Although science fiction may be the wrong term, possibly speculative fiction is the better genre use. They seem interchangeable and in many ways lots of these books do too. The characters, plots, etc. are all different, but they all speculate the possibility of worlds with excessive control, characters who want to escape that control, twists that possibly change your entire view of the story and an ending in which you feel satisfied, but not happy, questioning your own moral code and the future of our world as a whole. 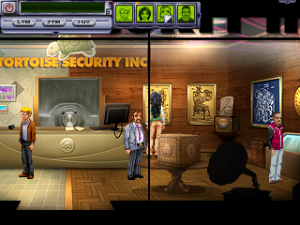 All this preamble is leading to a look at the just released speculative fiction point ‘n’ click adventure game epic by Vince Twelve/XII Studios, RESONANCE. A deeply satisfying, yet as it seems with ALL video games, no matter what, slightly flawed production, but none that detract from enjoyment. Yet, designer/writer Vince has stated that he expects to be hear these complaints and he’s already had bug detractors from the demo that has been available for a week, so nothing I say here should be too blaring compared to much more delicate video game players who either expect golden platters or never really explore enough to find some of their statements to be completely untrue.

A perfect example of this is in a review I read earlier today which stated that the four playable characters were shallow, the only one with real depth being Anna. This is very untrue. While Anna’s background is fleshed out through nightmarish maze levels which open up flashbacks, the other characters are more than fully developed with back story, sense of being and more through dialogue trees which are not essential to finishing the game and may only be discovered through full discovery are careful attention. I particularly enjoyed Inspector Bennett’s personal monologue that kind of explains about why he is the way he is.

The mechanics of the game are as important as characters and story and in most ways. RESONANCE hits it out of the ballpark with a few fouls. I absolutely loved using all four characters to figure out different puzzles, the clues and development of the long term and short term memory, the variants in puzzle style and design that kept things interesting and yet never stopped one from being able to continue on. In at least each of the more complicated logic/math/mechanic puzzles there always another solution and in the ones where there wasn’t, it was way less complicated than one thought. I think of one puzzle involving a magnet where I was frustrated forever and then one simple solution and it was really easy. I mean super easy, I just had to think. Actually I asked for help, but I would’ve eventually gotten it and I smacked myself for not realizing it sooner, although one could also blame Vince for not making it as intuitive as possible and I do feel that was an issue. It was actually an issue in various other places in terms of design. A lack of intuitiveness or the system reacting the way one would expect. Having to switch a character because he/she was standing in front of a hotspot another character need to access seemed quite retarded. The short term memory system also had issues in which it could remember items multiple times, wasting slots because of the way the system woke up in certain situations. These were the biggest of the flaws though. 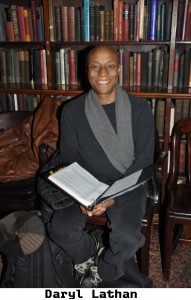 With that out of the way I’ll focus on my personal positives although with still a few negatives for a balanced review. I found all the voice acting to be superb except in some minor spots. It’s like a great movie though where so much money, time and energy has been spent on the main cast that the minor character is played by whoever could show up that day. It reminds me of that scene in Wayne’s World 2 when Wayne goes to the gas station and complains about a very minor role being handled by a “bad actor” and the actor is then replaced by Charlton Heston of all people. Unfortunately here Al Hansen kept his role and we were stuck with the “bad actor”, which more is to say that the performance wasn’t as strong as one would hope on the minor characters when the leads were so fun and quality. Most folks would praise Logan Cunningham, but for me it was Darryl Lathon’s Ray, who in many ways is the most important character, who was awesome. A kind of everyman as the outsider pulled into something that had nothing to do with him, yet becomes as involved and as important as anyone else.

The puzzles be they context based, environmental, logic, visual, etc. were all really well thought out. Even the more complicated ones or the maze like ones, they all seemed to fit. They never once made me go “Oh screw this”. Some may have taken me walking away for a day or two, but THAT is the sign of a well done adventure game. There are no steadfast rules on this though. Some folks love puzzles that are easy and allow a game to be an interactive story as much asd it is a game, while others appreciate games that really force you to think while also balancing story elements. Many of those elements may even become hidden to certain players as they worry more about the next puzzle than asking about every last thing which might extrapolate a line of dialogue that could create further character development. It’s a double edged sword, people complain about everything being fed to them, or people complain that it isn’t fed to them, there seems to be no happy in between. RESONANCE tries it best to find that, but I don’t expect that of any game developer ever. People will see a game the way they want to see it, it doesn’t matter what the game actually is.

As a hard sci-fi near future story with moral gray areas, difficult puzzles, amazing pixel graphics, sensational plotting and writing (that might actually be too gray as a story or movie, but workbrilliantly as an interactive software), concepts that make you think and more, RESONANCE is completely worth your time, attention and money.  I should also mention that unlike most films or books there is one option to see things end up.  There are only a few options available and they are all as gray as the rest of the game and its moral ground, but they definitely add to the entire sensation of the game.  There are also achievements which give the game a bit of replayability not seen in adventure games usually other than to experience the story again.  The alternate endings and achievements are just really nice extra touches that show Vince Twelve has a bit of forward thinking, although equally they may suggest a bit of stretching too thin and trying to do too much as some of the puzzles had shown.  Once again, that double edged sword.

For those weary there is a demo available which gives you a true feel for the production and should either compel you to have to continue on or know if it isn’t your cup of tea.

This review was based on a review copy courtesy of Wadjet Eye Games.  Screenshot courtesy of XII Games/Wadjeteye Games.  Image of Daryl Lathan courtesy of  Genevieve Rafter Keddy of Broadwayworld.com