For the Zero Day of Book Expo America 2012 I got to see and enjoy a couple interesting things and following I shall share them with you. The only place on the Expo floor was the gifts and remainders, but there are definitely booths there that are worth seeing. 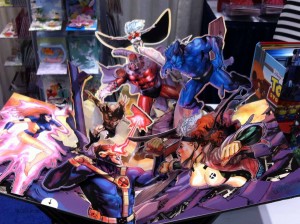 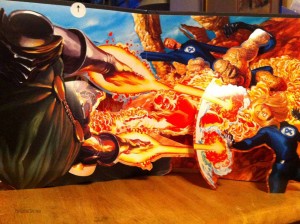 I discovered an AMAZING pop-up book that features original art pieces made specifically for this book by Alex Ross, Joe Jusko, Leinil Francis Yu and more. The most amazing piece actually has to be Amanda Conner’s Thor vs. Loki. INSANE! The book is published by Jumping Jack Press, a division of Up With Paper and will be in comic stores in July and everywhere else after Labor Day.

Being a gift section the main focus was products and I discovered an awesome optics/eye frame company. I always felt trying to get cool frames at a reasonable price was impossible, but with Scojo it wouldn’t be. Scojo Gels are designed to be reading glasses, but the way they’re made is not like regular reading glasses, so one can pop out the glass and put their prescription in. This isn’t what they recommend, but one can do it. 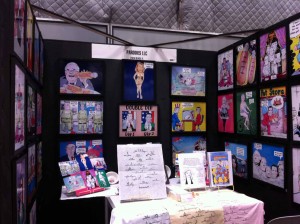 Next up the Parodies LLC booth caught my eye. Mostly it was for the art which happened to be by one of my favorite back in the day of independent comics rise, George Komninos who self-published the comics, Portrait of a Young Man as a Cartoonist & KIP. He’s focused more on single panel and pop art and working with the writer of Parodies to create funny images.

The final thing on the show floor to catch my eye was the Buddha Board. It’s a fun little art/play technology that I even made a little video of.

There was one panel in the Monday selection that I thought I’d find interesting, amongst mostly panels focused on booksellers, as I couldn’t afford to do BEA Bloggers and that was on Russian Children’s Literature. At the panel they mentioned and showed off one series/book that really caught my attention and that was MASHA AND THE BEAR. The book I saw was a puzzle book, but it totally sold me on wanting more of this, the cartoon, the book, whatever, translated or at least subbed. Here’s one episode to whet your appetite, which is all in Russian.

The final main event was the BEA Editor’s Buzz. I was only able to get three of the six books discussed as people are carnvourois at BEA, but I was happy to at least get PANORAMA CITY by Antoine Wilson, which I already started reading and am loving.

Super excited for the Expo to officially begin and really losing my mind.