Walking Dead: The Game, Survival DRAMA! (instead of horror… get it?) 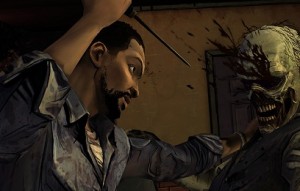 (the following review is dedicated to my friend, “Rhiannon” Miller)

Life is full of choices. Which shirt do I wear? What should I have for lunch? What movie should I go to? Who should I save from the attacking zombies?

That last decision isn’t really easy, it can change your entire life or at least in the case of Telltale Game’s The Walking Dead your entire experience over a five episode monthly season. At first it may seem not completely apparent how much your experience will truly change and in terms of major beats I’m not sure it will or if puzzle solutions will change as much as just dialogue and plot sequences, but it still makes for a fully replayable (sic) adventure. Doubly so because even without the chance to have portions of the story play out with different dialogue choices and segments, Telltale has put together an interactive graphic novel that one could see re-reading, just as one reads The Walking Dead comic again or owns the Walking Dead TV show on DVD to watch it again, good storytelling with quality acting.

For fans of the TV show the service is bit less, but they will get to see Glenn before he went to Atlanta and Shawn and Hershel Greene before Shawn became a Walker. Comic books fans get a minor character who did major things, as Lilly’s life before the apocalypse gets fleshed out. Everyone else we’ve been introduced to are original characters and while some reviews have stated these characters to be one dimensional, I feel that means they went for really super quick playthroughs (sic) to get their reviews out and never really took any time to listen to all the various conversations in which they are, including Doug, who was based completely on an actual real person. Of course none of them are as fleshed out as much as the lead character the player controls in Lee Everett. A character just as engaging, intriguing and with a variable personality even because of player choice. It seems like a small thing right now that you can decide if Lee is totally loyal, valiant, kind and all that jazz or mostly single-minded and only looking out for himself with a truly jerky attitude or something in between. 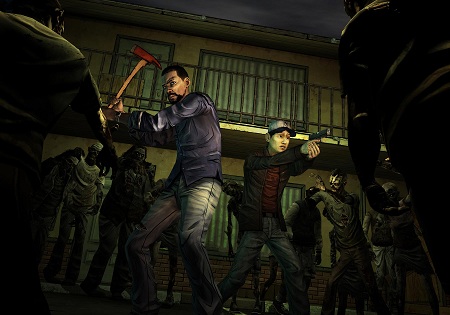 At many times the feel of the game is much for like a very interactive and controllable graphic novel. While there are actually puzzles which can take some common sense and in other times a good eye and understanding of logic as well as even the occasional very easy what has been known to be called QTE, which essentially translates to mashing a button and then mashing another button just at the right moment. There’s also some very minor targeting situations, but they are handled much more like a point n click adventure as Telltale has handled in the past. To my trained eye there doesn’t seem to be much change to the game design that differs from earlier Telltale Games such as Back To The Future, Sam & Max and Wallace & Gromit, and I’m one of those people who actually found those games to have a perfect balance of being easy to pick up for a complete non-gamer and only too easy for the strictest of puerile game players who want to feel like they’re taking a lawyer’s bar exam while playing a game or just find flaws to find flaws

I love most of all the art style which finds a way to combine what has become now known as Telltale’s signature art style with a very comic book feel with a line style that evokes both Walking Dead’s original artist Tony Moore and current artist Charlie Adlard. The animation does have various glitches that are easy to ignore, but can be jarring. In certain environments if you try to walk to the edge of the screen that isn’t actually passable, I noticed the animation would fall to a crawl. There was some texture parsing and floaters in cinemas that is distracting, but again not so much to ruin the game and make one scream bloody hell. Unless you you’re someone who demands absolute perfection and I mean ABSOLUTE perfection, which means, you’ll never ever be happy or satisfied and you better hope there’s a zombie apocalypse soon and that you become a zombie quick so that your brain becomes one process of eat, eat, eat. Which you know, could be interesting, but since I see myself as someone like Rick Grimes and possibly Lee Everett (who knows, it’s only one episode so far), you’ll end up being smashed to bits by me. 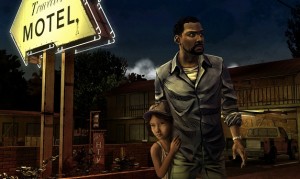 I actually highly recommend The Walking Dead game. It’s available on Xbox 360, Playstation 3, PC/Windows and Mac , so your options to play are very high. You can also choose to try out things with just purchasing one episode for $5 or getting the entire season. On the Telltale site there are even better deals that get you the whole season and other games as well if you’re new to Telltale and want to explore stories such as Back To The Future Part Four or Jurassic Park 1.5.

2 Responses to Walking Dead: The Game, Survival DRAMA! (instead of horror… get it?)