might be public knowledge that I am a Canadaphile, but that doesn’t mean it doesn’t ever bear repeating. I’m not just talking about liking certain bands or television shows that have gained release in America or Internationally though, a lot of people like the music of Neil Young, the acting of Michael J. Fox and David Cronenberg films. My love goes as far as not just Degrassi, but all Canadian teenage shows that have appeared on Disney, Teen Nick, The N, ABC Family, etc and more so the ones that only aired on Canadian Family, CBC and other Canadian Networks (and in cases the UK and Australia), but never made it to the US airwaves.

All this is to preface my excitement when I heard about the new iPhone/iPad app Totally Amp’d, a Canadian produced “web series” with similarities to shows such as Instant Star and 2Gether, both Canadian produced shows about discovering and promoting young talent. Produced by Smokebomb Entertainment, a Division of Shaftesbury, the show was created with Smokebomb’s three creative heads Jarrett Sherman, Daniel Dales and Jay Bennett who all have quality resumes. The program and app features music written by C.E.O. of Jingle Punks Music, Jared Gutstadt and features all kinds of genres, giving it a something for everyone feel in the sound department. On the writing team is Karen McCellan, previously of Being Erica and on three out of 10 episodes, Christin Simms who was a major part of Jimmy Two-Shoes, Clone High and Dino Dan. 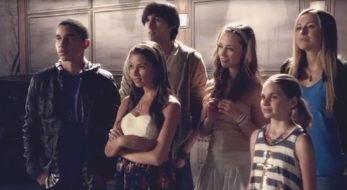 What is most exciting about Totally Amp’d though is the amazing cast. The big pull on the series in terms of who they are marketing to mostly would be Cristine Prosperi. Cristine is currently a

major player on Degrassi, coming in on season 11 as a new foil character attracted to the very popular Eli played the extremely popular Munro Chambers. Cristine gained a following immediately like most Degrassi cast members, but it is a deserving one as she is both gorgeous and talented. For the slightly older fan though there’s a major draw too in Ashley Leggat who became famous on “Life With Derek” which ran from 2005-2009, there she garnered a fan base in Canada and America and has made appearances in popular Shaftesbury shows such as Murdoch Mysteries and Aaron Stone, including an appearance on Cartoon Network’s Unnatural History. The third known commodity on the show is Demetrius Joyette, best known from the Canadian Teencom “Wingin’ It” which has unfortunately never aired in the U.S. Rounding out the cast are newcomers to television Amanda Thomson and Brock Morgan, as well the very experienced yet youngest member of the cast Camden Angelis (who has even done an episode of Scare Tactics). The show also features the talents of James A. Woods (no relation to the other actor of the same name) who has a expansive resume.

There are two other talents not in the initial marketing of the show to make note of.  Shemar Williams, a very popular and talented dancer who actually had a dancing training segment for kids on TV and Dewshane Williams who had major roles in Baxter and Being Erica.

All the promotional hype out of the way, how is the actual final product? Excellent. The songs are fantastic, actually the main shining light more than anything. The characters are awesome too. It should be noted that while there are 10 appisodes, each appisode isn’t more than 6 minutes each, creating an about one hour short film. It’s a perfect length for the iPhone though where this show is made to live. Although it also fits the new professionally made web series format.

What makes the app part special are the unlockable karaoke format songs, the editable music videos and the highly entertaining dress em up. There are seven songs that you can record your own vocals for and then input them into a remix which you can pick and choose the elements including original vocals, drums, guitars, bass and percussion. There are five videos which you can choose the angle shots to create your own version. Both the kraoke and video edtiors are simplistic in nature and would be exciting to have a more fleshed out ability, but this isn’t a music app or video app, it’s an all around concept in which on top of a full length professionally created show exclusive to the iPhone you get some really fun extras. Then there’s the design studio which is the bread and butter of the app segment, something app developer XMG has truly excelled at. It’s truly a total package at $5 for the full season (free to try and test with the first episode) and truly worth it.

I’m hoping for a second season and that with it hopefully a longer story and more expanded applications, but this first part of Totally Amp’d is highly recommended for anyone with an iOS device running 4.3 and above. For those without an iPhone, the album is also available on iTunes and the Youtube channel has a lot of great stuff.