Keeping an eye on Wadjeteye

I first discovered the writing and programing talent of Dave Gilbert through the AGS website and specifically the first games he tackled based on the Reality-On-The-Norm universe and then his first AGS game, the uncomplicated as it existed, but still essentially continued (by Blackwell) Bestowers of Eternity. I was happy to see him continue on as a writer with the AGS award winning Two of A Kind and his first major project The Shivah. This game was eventually expanded into a commercial game which allowed him to begin his independent studio Wadjeteye Games which has not only become home to his excellent and inspired Blackwell series, but as a publisher/distributor for games written by.

The latest game from Wadjeteye was The Blackwell Deception, a very well crafted chapter full of interesting dialogue, clever puzzles and exciting plot enhancement and direction which delivered on all fronts for fans of adventure games. While the pixel bit graphics are obviously a desired taste, a true adventure game fan and a person who appreciates great writing as well as the painstaking effort to create recognizable quality pixelart will absolutely love it.

At this years New York Comic Con I had the pleasure to sit down with Dave on a relaxing Sunday after much chaos and have a passionate and exciting 25 minute conversation about his history getting into programming and developing as such.

I found it quite interesting that prior to AGS and Reality-On-The-Norm he had minimal background in programming and had not been published professionally as a writer. It was 10 years ago after going to school for broadcasting and being laid off from a job at CNN, that over a weekend after the Twin Towers/September 11th situation happened he discovered AGS and the RON games and decided he could do this, as the software was fairly easy for one with some basic programming skill and RON already had an established shared universe and graphic assets.

Following that came the aforementioned Bestowers of Eternity, followed by a collaborative project Two Of A Kind, which won lots of merit and awards. Dave laments that the two other people he worked with no longer seem to be involved in the gaming world.

I asked Dave a lot about the writing process behind the entire Blackwell saga, curious to how much he had locked down in terms of where the story is going. He told me that he knows exactly his ending, but it isn’t exactly fully structured out with notes like a set screenplay or novel, there’s no “bible”… just what sits in his head, except some major structures are “written” down, like Joey’s origin. Which I find quite fascinating, cause that’s a lot to keep jumbled up there, but at the same time it allows him to work more freely and let random ideas pop in or change his focus on the sage as it exists. He had done a job where he was paid to defraud a phony psychic and he knew that at some point he wanted to use that as the plot for a game and he worked around that for a Blackwell game, building from the basic plot. The puzzles and writing come first, followed by dialogue and restructuring before the actual coding. 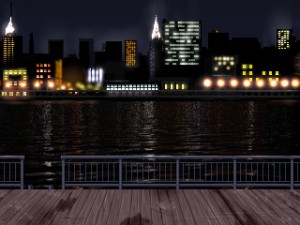 e proceeded talking about puzzle solutions, how people will solve them, how they get decided upon, it was really fascinating, and showed me how passionate Dave is about game creation and adventure games.

One of the final things we spoke of was Dave’s one professional game developed outside of Wadjeteye. Approached by games company Playfirst for a casual adventure game and after several pitches an Emerald City/OZ game was approved. Emerald City Confidential is one of the favorite games in my echelon of ownership. We discussed the conceptions of creating an OZ story and the rights behind creating something in public domain.

I suggested that Dave consider writing his games out as a book as well, we shall see where that goes but in the meantime, grab yourself all the Blackwell games, as well as Gemini Rue, the first published game by another developer from Wadjeteye and do yourself a favor and hunt down other games as well. The AGS scene is awesome and while Dave is one of the tops and deserves the attention, broaden yourself, it’s worth it.