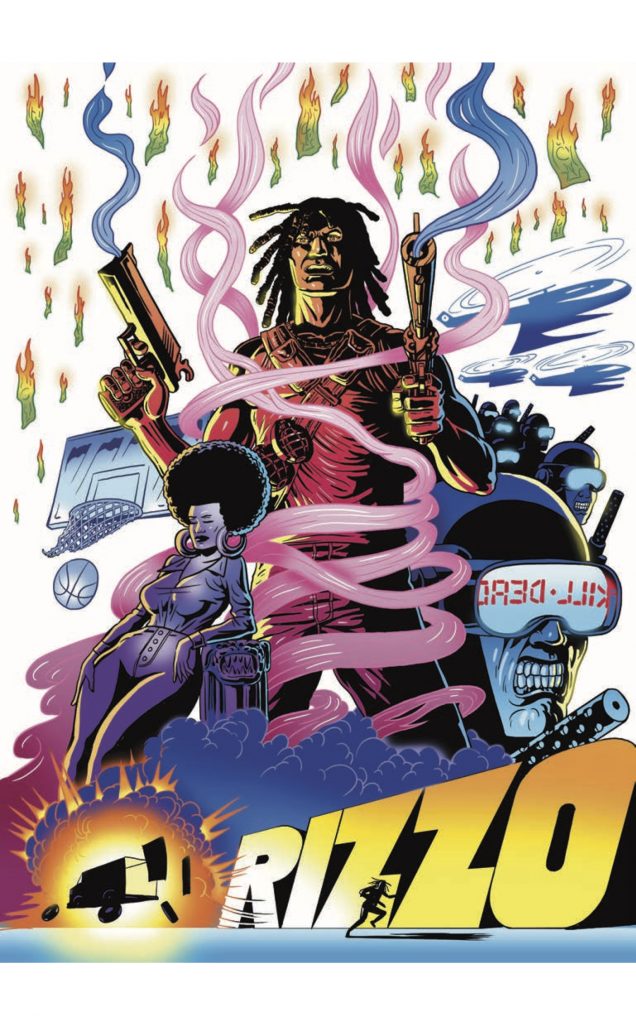 STONE, the first novella in the series, follows Graciela “Stone” O’Leary in an electrifying revenge fantasy set in a near-future dystopia where the brutal Merit Party has cancelled the elections. io9 praised the novella as “a very timely tale… featuring gorgeous illustrations by the author.” RIZZO, the follow-up, introduces us to Stone’s friend Rizzo as he gets his own revenge on the society that’s determined to keep him and his people down.

“Ben and I share the same comics publisher, got seated next to each other randomly at a convention signing a couple years ago, and became friends on the spot,” said Anderson. “I read his book Night Business and immediately started dreaming of collaborating with him. I totally clicked with his graphic novel’s 80s neon-smeared brand of exploitation, a set of sensibilities I hold very dear to my heart. I think Ben’s art reached a new level with his work on Rizzo, and I’m thrilled we got to work on it together, and for people to see what Ben’s got up his sleeve.” 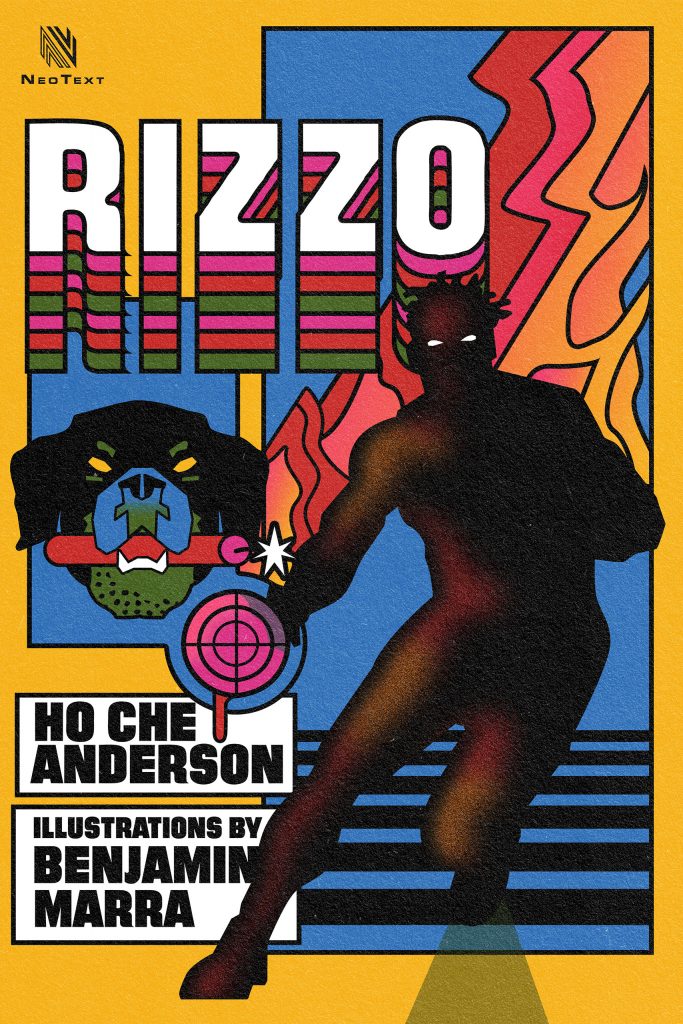 Once Rizzo was a legend in the making, a kid from the flats on the way to achieving the dream of becoming a pro basketball player—until he crossed the Martin family, regional directors of the Merit Party, and wound up on the Chain Gang, facing a slow, cruel death sentence of years of hard labor in service to the very people who stole his life. But in a world where US elections have been suspended, and the poor are taxed at a rate far, far greater than the rich, Rizzo watches the guards drag two men to their execution for a trivial offence and decides now is finally the time to embrace his plan.

Rizzo must return to his hometown, form a crew of the best people he knows—Dennis, the smartest person ever to attend the flats high school and an expert on electronics, security systems, locks, and surveillance equipment; Mo, the sneakiest person alive and a self-appointed spy, always one jump ahead of the authorities; and Rhino, whose impulsive explosiveness with his unparalleled fists is both his weakness and his strength—and lead a revolution to overthrow the Merit Party. He’s already worked out where to start: by hitting them at their most sensitive point—their money—in an outrageous heist that shouldn’t be possible. But first, there’s the matter of escaping the confines of his prison. And Rizzo has a plan for that too…

“Ho Che Anderson is a legend whose comics work I’ve been following for decades,” said Marra, the acclaimed artist of American Blood and JesusFreak. “I have a tremendous amount of respect and admiration for his talents as a writer and artist. It’s been a special honor to get to know him as a friend and an incredible experience to collaborate with him on this project. I hope it’s the first time of many. The story Ho Che wrote is pure pulp crime genre goodness. It’s exactly the kind of thing I love and which inspires me to make art. It was easy to be inspired by his prose to create the illustrations accompanying the narrative, and I hope my images do his words justice.”

“I’m really excited about Stone as a character and as a world,” added Anderson. “Not only is it a fun universe of thrills and chills to play in, but it also has the somewhat unwanted function of being a cautionary tale. When we started this project the idea of an American dictatorship was, we were hoping, a paranoid fantasy. Flash forward two years and suddenly we find ourselves living in a world in which the so-called leader of the free world, of the grandest democracy in history to hear it told, wants to smash that democracy and, what, declare himself dictator for life? The story we’re telling would be relevant in any era—the craven desire for power and its ease of abuse is eternal—but as it’s turned out, the world of Stone has become a sad reflection of where we’re at in 2020 in the real world and where we could be heading. No matter where we as a society go from here, I have a lot of stories I’d like to tell with these characters and I can’t wait to get started on them.”

A politically timely and cathartic thrill-ride, RIZZO will be available digitally on October 20th for $1.99.

Born in London, England, Ho Che Anderson was named after the Vietnamese and Cuban revolutionaries Ho Chi Minh and Che Guevara. Anderson began his career as the author of numerous graphic novels, including KING, a biography of Martin Luther King, the horror thriller, SAND & FURY, and the science-fiction action-adventure, GODHEAD. During this time he also wrote the children’s novel, THE NO-BOYS CLUB. After a two-year stint as a Toronto Star reporter, Anderson embraced a lifelong fascination with filmmaking. He studied film production at the Toronto Film School and Sheridan College, during which he was involved in the production of more than 40 shorts as either DP, camera operator, editor, writer, or director. One of those films, LOTUS EATERS, won best picture at the 2014 TFS Festival of Films and was an official selection at the 2014 ReelWorld Film Festival. Following film school he joined IATSE Local 667 where he worked for several years as a camera assistant on numerous shows including Reign, Taken, and Designated Survivor to further hone his skills. Anderson wrote and directed his first feature in 2018, the supernatural heist thriller, LE CORBEAU, for Canada’s Telefilm, and is currently in development on a second feature with Antigravity Entertainment. He is also hard at work scripting several graphic novels, among them another tale of the supernatural called, THE RESURRECTIONISTS, for Abrams Books.

Benjamin Marra is a Grammy-nominated American illustrator and comic-book artist, as well as the creator of the books Night Business, American Blood, and Terror Assaulter: O.M.W.O.T. (One Man War On Terror). Marra’s illustrations have appeared in Playboy, Rolling Stone, and The New York Times, to name a few, and have been recognized by The Society of Illustrators, The Society of Publication Designers, and American Illustration. He currently resides in Brooklyn, New York, where he draws comics and is a designer for MLB Advanced Media.