Wrestling is not traditionally a primary focus of Pop-Culture Spectrum, but if you head to the art portfolio you’d see it is one of the most primary sources of entertainment for the site’s creator. P-CS’ director also works directly in professional wrestling as a producer, agent and talent relations. During the pandemic it has been very hard to be both a fan and work in the industry but they have been doing so. Yet they have not been to a real show since January of 2020 not counting the invite only event of MV Young’s Polyam Party 1 in an undisclosed location in August.  Their big return to shows will be the three day long The Collective in Indiana. A recovery from an event originally scheduled for Wrestlemania 2020 weekend in Tampa, it was postponed/cancelled like all independent events for that time period. In what was practically a shocking announcement the event is still happening albeit with a different line-up then originally announced.  It still is a crazy event though and PC-S as well as one of their compatriots and hardcore fellow wrestling heads of similar interests have decided to hit the event up in all its glory with front row seats to every event, spending a day before and after, and plenty funds for meals, merch and more.  Other websites have written up the current line up as announced, but P-CS likes to do things their own way, so here is the current card (updated as we come closer), with a few personal words on each announced match from the mind of Reid Harris Cooper, described by some as a wrestling ambassador and others a living, breathing cagematch.net (although I don’t know everyone, but I do know how to look them up).

SIDE NOTE: If you won’t be in Indiana for this all the shows are available on FITE, but your best deal is the complete package with unlimited replay options. 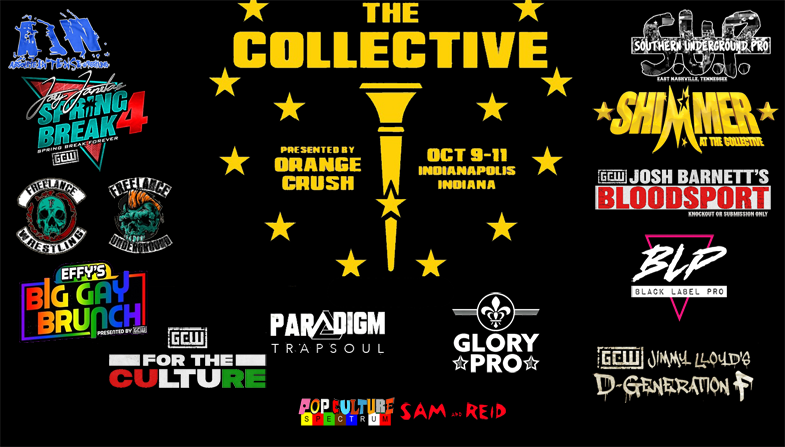 Jordan Oliver vs Ace Austin: This will actually be the second match between these two, the first taking place on September 29th at Synergy Wrestling. This doesn’t take away from the excitement of this match at all though. Different setting, different state, different environment, different time, different prestige, different mindset. Jordan has been making a lot of noise since coming back from Covid with added bulk and focusing his energy of his team with Myron Reed while Ace Austin has been killing it on TV weekly while also branching out, expanding his network and making himself sought out.
DEATH MATCH: Colby Corino vs Atticus Cogar

Blake Christian vs Starboy Charlie
Calvin Tankman vs Cole Radrick
Jimmy Lloyd vs AJ Gray (?): After the two biggest matches of his short but amazing career, Ben Carter was tested Covid Positive. Here is hoping that quarantining till The Collective allows this match to happen as this is a dream for Jimmy and I don’t know who he would choose as Option B. EDIT Update: Unfortunately Carter won’t be cleared by Friday (or doesn’t want to take the risk). I don’t know if AJ Gray was Option B or just another great match that obviously will be very different than the one with Ben would’ve been.
Smoking Budz vs Ellis Taylor & Charlie Tiger (YDNB) vs Steve Sanders & Dyln McKay (Hi-02010) vs Top Flight (Airwolf & Lucha Angel)
1 Called Manders vs Logan Stunt: A true David vs Goliath, even more so than “Wildheart” and Tankman. Manders is the cowboy we all need, but Logan has some of the most educated feet out there.

4PM SUP
Erick Stevens vs Brett Ison
Allie Kat vs Davienne: These two had their first ever encounter last year at Uncharted Territory for Beyond. It’ll be great to see what they do in this showcase
To Infinity and Beyond (Delaney & Cheech) vs Violence is Forever (Ku x Garrini)
Jaden Newman vs Anthony Henry
A.C. Mack vs 1 Called Manders
Jake Something vs O’Shay Edwards: The HOSS wars are all going to be something.
Nolan Edward vs AJ Gray

Daniel Makabe vs Lee Moriarty: Easily could the show stealer, and by that I mean of the entire weekend. Makabe not long ago was called the #2 Best Technical wrestler period. Since that time lots has changed, he automatically became #1 because reasons, but hasn’t had many opportunities to prove that. This match against Taiga Style, who has quickly become one of the best period is that chance.

Danhausen vs Kevin Thorne?: Very evil, very nice, very angelic. This match is just going to be weird. Mordecai isn’t even a wrestler anymore but I know he goes to 11 when its time to and against one of the most interesting, charismatic talents he better.

Danhausen promotional advertisement for Danhausen Vs @TheKevinFertig for @aiwrestling at @collective2020 isn’t that nice. pic.twitter.com/GAPXVnGvJi

I can’t wait to show up a feline and an Amish person
This Friday
Indianapolis, IN
Tickets: https://t.co/tRJs4g4xYr

LIVE on FITE this upcoming Friday, October 9th at 8pm!

Pro Wrestling In Indianapolis, IN: AIW At The Collective!

Dominic Garrini vs. Erick Stevens
AIW Tag Titles-Best Two out of Three Falls: To Infinity and Beyond (c) vs The Philly Marino Experience

MIDNIGHT FTC
This entire card is absolutely insane. While it is specific to its point of being For The Culture it is also legitimately some dream matches and matches one may never seen again anywhere else just because of how the industry is.
2 Cold Scorpio vs AR FOX
Calvin Tankman vs O’Shay Edwards
JTG vs Trey Miguel
AJ Gray vs Dezmond Xavier
ACH vs Lee Moriarty
PAWD Championship: Trish Adora vs Suge D
Faye Jackson vs Devon Moore vs Marti Belle vs Willow Nightingale
Top Flight (Angel Dorado & Airwolf) vs 40 Aces (Tre La’Mar & Pretty Boy Smooth) vs SZN (Tasha Steelz & Christian Casanova)

11 GAY BRUNCH
Effy vs : Kelly had to pull out last minute fior an emergency but I tust EFFY will have a quality opponent.

So I Have now step up my #Crossfit workouts now because @EFFYlives decided to enter me in his #twinkgauntlet for #EffyBigGayBrunch #LGBTQ #Bear pic.twitter.com/hMrmSFoeCa

3 PM GLORY PRO
Topflight (Air Wolf & Lucha Angel) vs Gaytanic Panic (EFFYHausen) vs Dan the Dad & Allie Kat: Honestly not sure which of the Gaytanic matches I’m more excited for, this or the crazy one they have against MAJOR former talents who are still great later in the week.

For the Crown of Glory pic.twitter.com/Etj0Tr1cR4

Who would of thought❓Not me! See you soon my friend. This Saturday! October 10th in Indianapolis Indiana. @fitetv @gamechangerwrestling @thebadboyjoeyjanela

MIDNIGHT Freelance
Commentary by Val Capone and Sterling Richards
There’s a lot of clowns on this show. I mean actual literal clowns.
EFFY vs Robert Anthony /w Frank the Clown

This week for the first time. Ego vs @EFFYlives for @FreelanceWres and the Collective on @FiteTV Effy let’s see what you are truly capable of. pic.twitter.com/dSecVNHoOq

“Filthy” Tom Lawlor & Erick Stevens vs
Through the circumstances of one individual, four of these amazing talents were cancelled out (not by them or the promotion). I feel BLP will make as good on this as possible.
“Walking Weapon” Josh Alexander vs “Legit” Leyla Hirsch: The best of any intergender match announced
JD Drake vs Blake Christian
Killer Kelly vs “Killer” Kylie Rae: This should be a banger
BAD MOTHERFUCKER SCRAMBLE: Big Beef vs Jody Threat vs Matthew Justice vs AJ Gray vs Levi Everett vs Gary Jay vs Air Wolf vs Joshua Bishop
BLP Tag Team Titles: Besties in the World (Davey Vega & Mat Fitchett) (c) vs Violence is Forever (Kevin Ku & Dominic Garrini)
#1 Contender’s Match: Ethan Page vs Calvin Tankman vs Isaias Velazquez vs Alex Zayne
BLP Championship: Jake Something (c) vs WARHORSE

11:30 PM Paradigm
Kevin Ku vs Dominic Garrini: Only their second ever one on one but they as a tag team and as members of Team Filthy wasn’t the big deal it is now. This is going to be a War
UWFI Rules: Hoodfoot vs Erick Stevens 2

"You're Nobody (Till Somebody Kills You)" Part 1.

This is still not a complete and final card. Some wrestlers may be replaced, some matches may change, there are matches still to be announced. This line up as it is now though is solid as all and we at Pop-Culture Spectrum are very very excited for the experience.