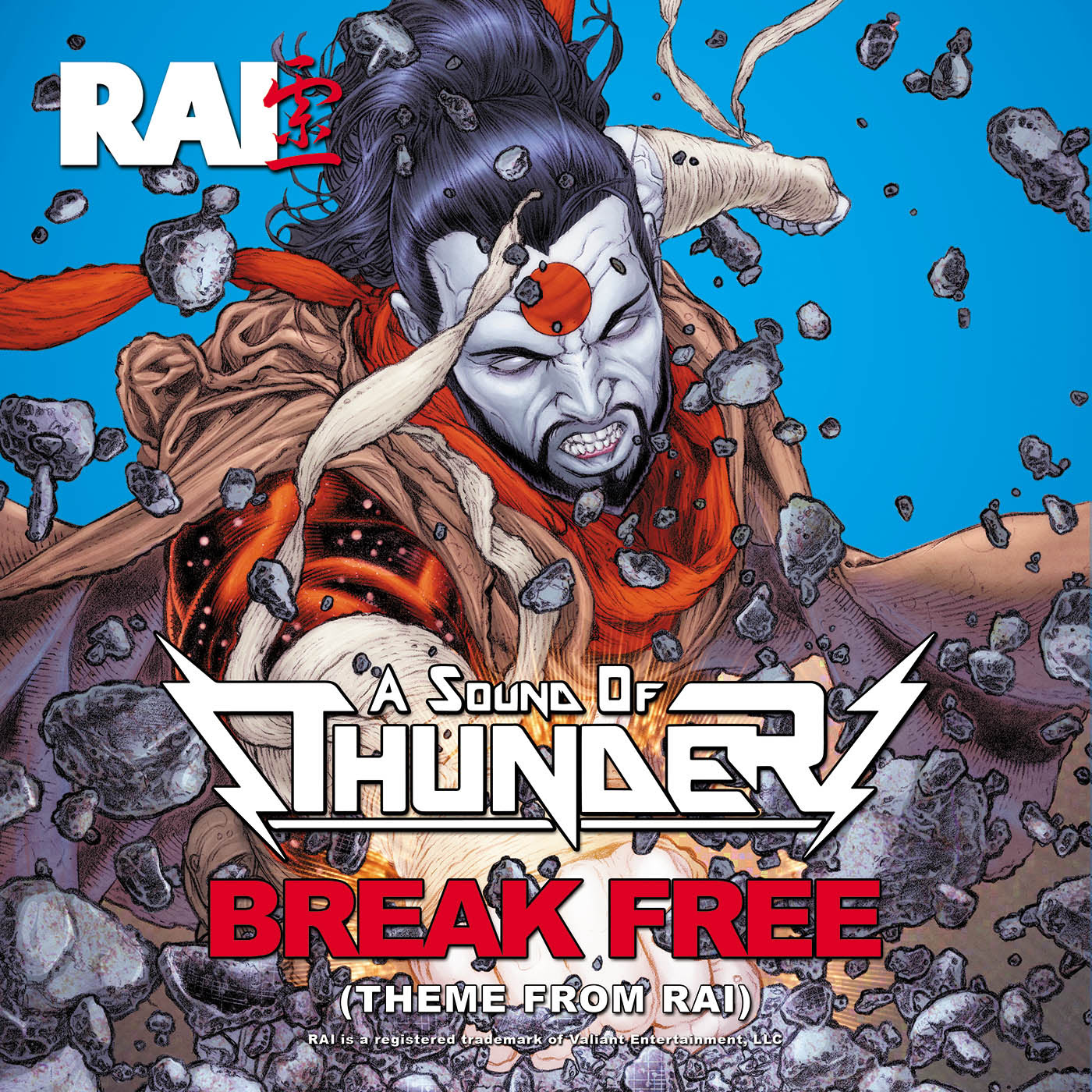 Featuring lyrics by series writer Dan Abnett, “Break Free” is offered exclusively through the band’s Kickstarter as a companion to their new album Parallel Eternity. The catchy single also comes with an exclusive RAI #1 variant cover by Paul Pelletier, which is an homage to Derek Riggs’ cover for Iron Maiden’s album Somewhere in Time. The limited edition variant is available with the modern trade dress (500 copies) and classic trade dress (200 copies). 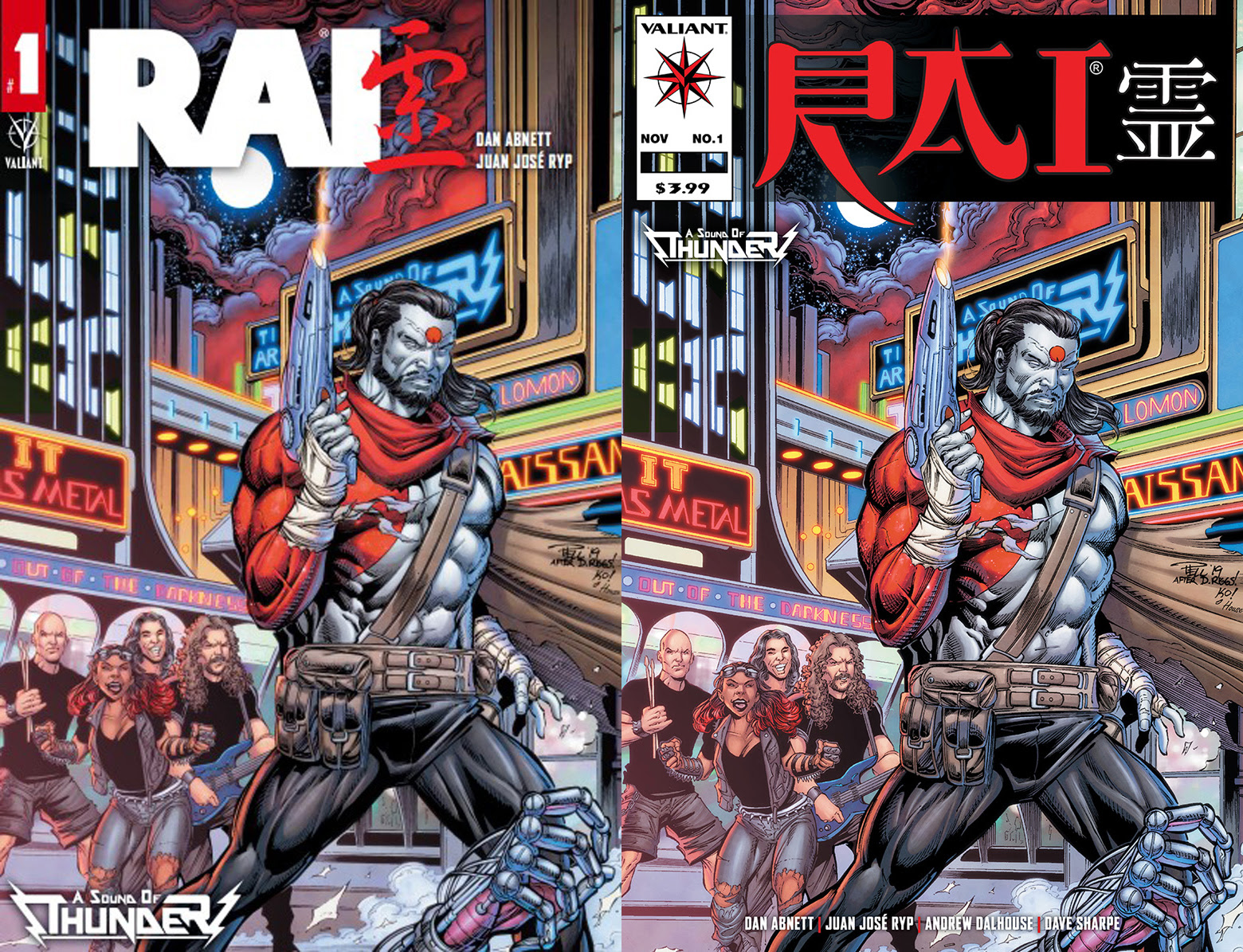 Dan Abnett is a veteran of the comic industry, but this was his first time writing lyrics for a song! Here’s what he has to say about the new experience:

“I’ve never been asked to write lyrics before (though I’ve written a few songs over the years – never published or performed). It was, I guess, quite daunting to get a piece of music sent to me. A Sound of Thunder make a deliciously powerful noise… how could I write something worthy of that soaring music? How could I come up with anything that would work for Nina’s amazing voice?

First, I decided to try something ‘general’. I didn’t think it would be useful to tie the lyrics into anything story-specific with the new comic series, because plot advances all the time. I tried to think more about Rai’s over all situation: his background, his origin, his eternal clash with Father, so the song could be more of an anthem that worked for Rai generally, across his ‘career’. I also didn’t want to be too ‘on the nose’, and make the words too direct or specific.

My musical tastes are broad and eclectic. I listen to music a lot, but when I work it has to be ‘lyric free (soundtracks, ambient etc) so the ‘words’ don’t get in the way. Songs with lyrics tend to get airplay in the car, or when I’m not working. There was something about the track that made me think of old favourites, especially Rush, circa “Grace Under Pressure”…. The pace, the power of the drums, the muscular strength of the music. I thought it would be fun to do (try to do!) what a band like Rush did so well, which is to write a straight-up SF based track, nothing tongue in cheek or knowing, just unashamedly in its own world.

I listened to the file a lot, and wrote lyrics that I thought ‘fitted’…even adding timings. I am a complete amateur. The band’s first reaction was – unsurprisingly – that I’d written ‘too much”… that I’d covered every square inch of sound with words, too literally, filling in everything. To be fair, I always imagined that – at best – anything I wrote would be a simple springboard for their work. I didn’t expect it to be kept intact.

I guess I had a novice’s unwitting luck, because once they got in the studio and started to work on it, they ended up keeping a surprising amount…and even turning sections of the track that had been intended to be lyric-free into lyrical elements. I was delighted that they liked it and were inspired by it. I was even more delighted to hear the end result. It’s epic, and I have to admit I got chills hearing the band play and Nina power into the words. I am flattered that so much of my scrawling made it to the final cut.

I helped make a song, but the band did all the heavy lifting, and I hope I didn’t give them an uphill struggle. The track is better than anything I could have imagined. And in the process, they made me a fan. I’m a little bit in awe, to be honest. When you work with people who really know what they’re doing, and who have proper expertise in an area you know nothing about, its enlightening: to see something happen, to see the skillful ease with which they work a project into shape. It was fun, it was educational, and it was a privilege. We should all leave our creative comfort zones more often, and learn from the way other people do their things.

When can we do it again?”

Listen to a sample of ‘Break Free’ here:https://youtu.be/mMktCwt18a8

This entry was posted in Comics, Music. Bookmark the permalink.