UPGRADE SOUL Will Relaunch Its App in October, Timed to the Release of Alexis Gideon’s Haunting Score on FPE Records

(October 22, 2019) Ezra Claytan Daniels’ mesmerizing graphic novel debut UPGRADE SOUL has received widespread praise and award nominations for the comic book industry’s top honors, including The Dwayne McDuffie Award for Diversity in Comics and the Eisner, Ignatz, Harvey, and ‘Ringo Awards. This fall, the critically acclaimed book is expanding into multimedia with the vinyl release of Alexis Gideon’s UPGRADE SOUL Original Soundtrack and the relaunch of an innovative UPGRADE SOUL app. Both the app and the soundtrack will be available for purchase October 25th, 2019.

UPGRADE SOUL is the dark and surreal story of an elderly couple who volunteer themselves for an experimental scientific procedure intended to rejuvenate their aging bodies. When the procedure goes horribly wrong, creating physically disfigured but intellectually superior clones of the couple, the scientists, the couple, and their clones must grapple with existential questions of morality—with very real consequences. The book is a profound meditation on identity, and the ways society imposes restrictions based on our age, gender, race and perceived disabilities.

Ezra Claytan Daniels spent a decade writing and drawing UPGRADE SOUL before it was published in book form last year by Lion Forge. The book was originally conceived as a digital graphic novel and published as an interactive iOS comic app, launching in 2012, complete with 3D picture-box effects, extra features, and unlockable content. The app was designed by Erik Loyer, a media artist and two-time Webby Awards Official Honoree, whose work has been commissioned by the Whitney Museum of American Art,  the San Francisco Museum of Modern Art, and the Museum of Contemporary Art, Los Angeles.

“Erik Loyer’s interactive web-based science fiction story called Chroma was a game changer for digital storytelling,” said Daniels. “Stylish and thoughtful, it showed a path for digital interactivity to push the boundaries of the comics form even further. I sent Erik a gushing fan letter about Chroma and that led to the UPGRADE SOUL app.”

“The UPGRADE SOUL app release seven years ago was ahead of its time and helped pioneer digital comics tech which is now in use in games, apps, and on the web,” said Loyer. “Now technology has caught up and enabled us to finish the project as we originally intended, with the rich interactive score, 3D picture-box effects, and seamless navigation that makes the experience so immersive. There’s a reason why we put it on the App Store in the ‘Entertainment’ category—it’s not an ‘enhanced’ version of a print graphic novel, it’s its own unique thing.”

The app featured an incredible original score by composer/hip hop producer Alexis Gideon, who is known for his work with the band Princess and his solo Video Musics series of animated operas. Gideon created the music for the UPGRADE SOUL app to seamlessly flow with and complement the interactive app, creating a wholly unique experience that’s a high water mark for digital comics and a standard-setter for the future of the medium.

“I tried to draw out some of the unsettling and cinematic sci-fi/horror undertones of the book with Goblin and John Carpenter-esque compositions,” said Gideon. “The inquisitive and philosophical nature of UPGRADE SOUL’s story encouraged me to experiment with searching and soundscape compositions.”

And in October, for the first time, the trippy and ethereal soundtrack that accompanied the app’s initial launch will be available to the public outside the app. Chicago’s FPE Records will release the soundtrack in two formats: a regular black vinyl edition and a limited deluxe edition featuring translucent orange vinyl, red markings, and a signed print by Daniels. Of the latter, only 100 copies will be released worldwide.

“Alexis Gideon’s music for the UPGRADE SOUL Soundtrack perfectly expresses FPE Records eclectic ethos – you can’t say what genre it is and it’s addictively catchy and groovy,” said FPE Records founder Matt Pakulski. “Bonus that it scores such a weird, deep, lovely, repulsively attractive work of narrative fiction, and that cover! It’s a dream project for me and I’m proud to have it join Turning Jewels Into Water, Nicole Mitchell and others on the FPE roster that defy our expectations and keep us mesmerized.”

“UPGRADE SOUL was originally conceived for this format; when you put on your headphones and start swiping through the panels, and Alexis’ score punctuates every interaction, it’s just an incredibly immersive reading experience. There are several moments where my already creepy story becomes almost unbearably tense,” said Daniels. “We set out to create a digital comic that was first and foremost reverent to the comics medium, and I’m so proud of the final result.”

“Masterfully crafted. Daniels’s prose is haunting and cinematic, and his storytelling structure is magnificent.” —Vulture

“A dazzling, disturbing piece of science fiction that examines aging, family and science gone wrong. It’ll grip you from the first page on.” —Comics Beat

“Brilliant. One of the best comics I’ve read in years.”  —Mat Johnson, author of Loving Day and Incognegro

“Earth-shattering sci-fi. UPGRADE SOUL has profound things to say about mortality, aging, identity and the fundamental sense of self. Every choice, every component of UPGRADE SOUL simply works.” —Paste Magazine

“One of the best comics of the year, full of incredible depth of characterization, unexpected turns, difficult resolutions, and broad themes dealt with using pinpoint precision. It’s one of the rare works that yields deeper meaning each time it’s revisited, and where not a single panel of narrative is wasted: each development furthers a promise made to the reader that we are in the hands of a creator who is taking the questions he asks seriously.” —The Comics Journal

“A beautiful work of deep emotional resonance. It transcends the medium of comics, settling comfortably in the realm of literature. Nothing short of a masterpiece.”  —David Walker, writer of Cyborg, Shaft, and Power Man and Iron Fist 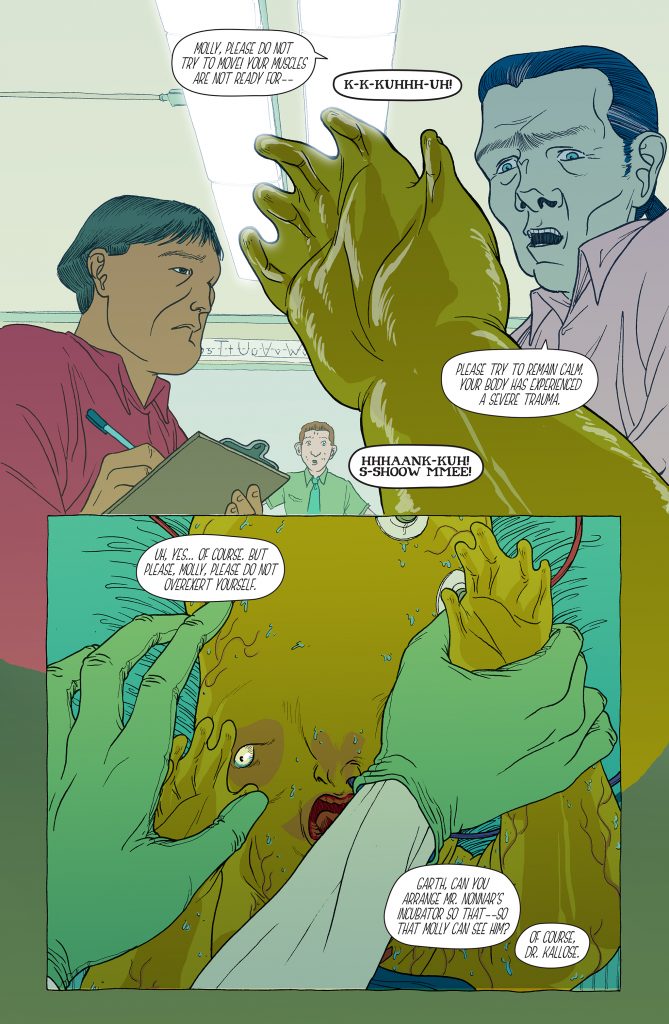 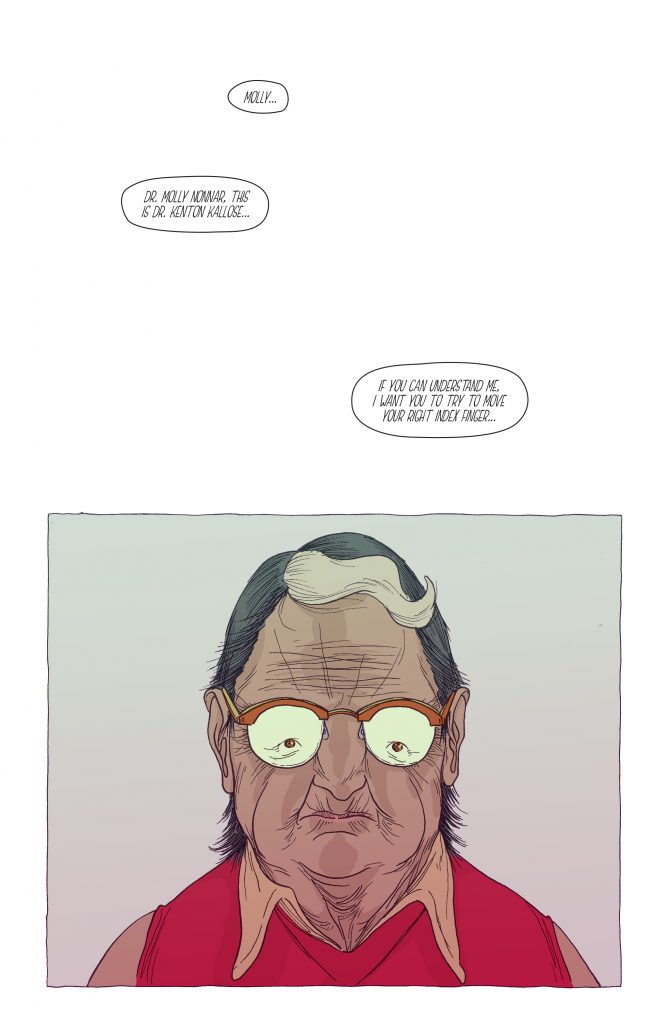 Ezra Claytan Daniels is a writer and illustrator based in Los Angeles, CA. His Eisner, Harvey, and Ignatz Award-nominated graphic novel, UPGRADE SOUL, was the recipient of the Dwayne McDuffie Award for Diversity in Comics and was named one of the best books of 2018 by Publishers Weekly, Vulture, Library Journal, and Paste. His graphic novel collaboration with Ben Passmore, entitled BTTM FDRS, was released in June 2019 by Fantagraphics Books.

This entry was posted in Apps, Comics. Bookmark the permalink.